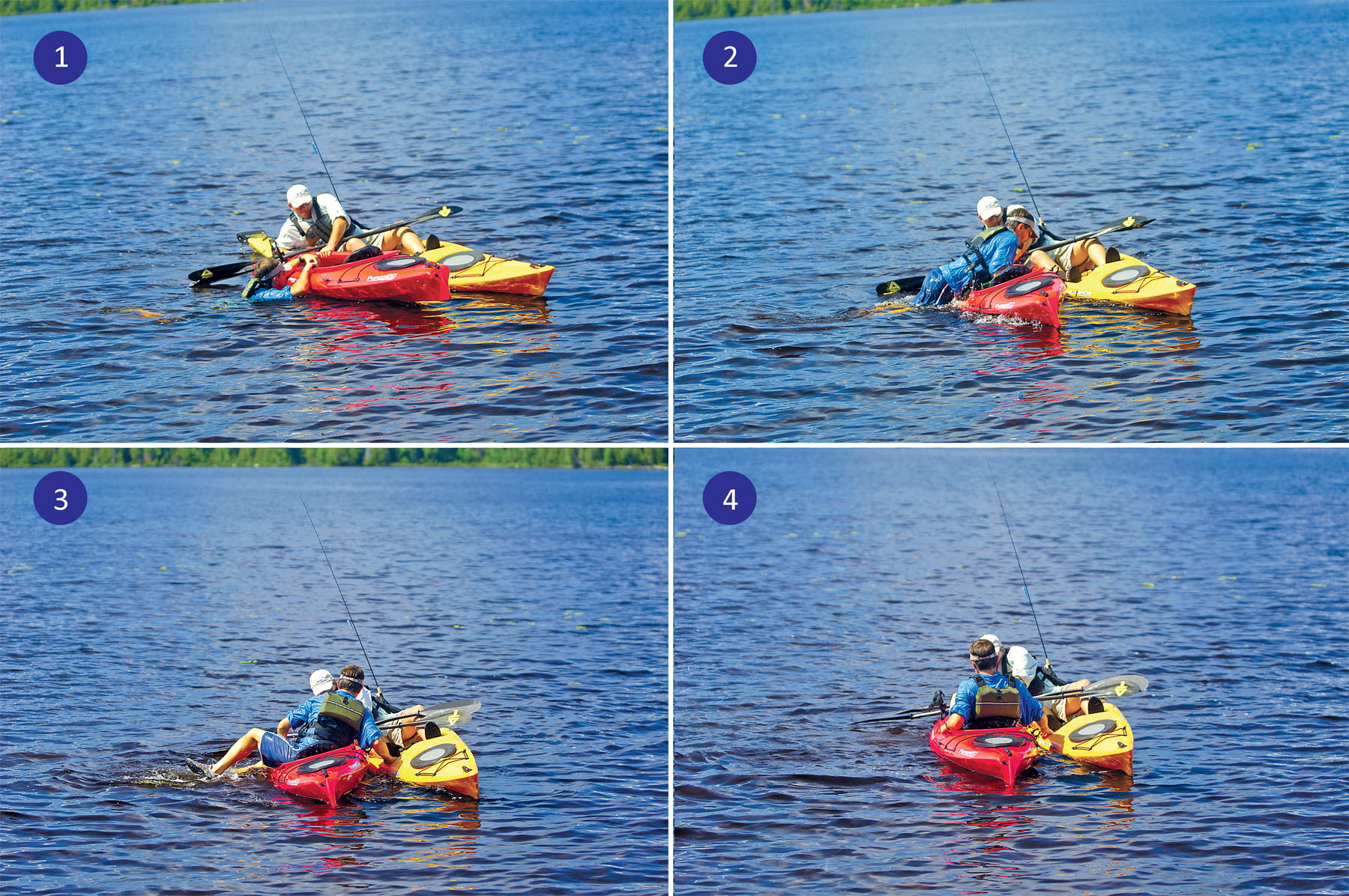 In addition to the detailed text, photo series such as these are used to further illustrate the techniques discussed.

Tonight I'm feeling like a trophy trout wrangler about to grasp a fat sow. This afternoon my publisher sent me the final revision of a book Joel McBride and I have been working on for over a year. It has now gone to the printing company and the finished product will come to hand in the next few weeks. Similar to grinding out a long wade on a cold February day and scoring a personal best trout, it has been an incredible experience.

It all started with a simple phone call from Joel in the fall of 2005. A friend of his, Ken Whiting, had contacted him asking if he would be interested in doing a book on kayak fishing. Ken owns Heliconia Press and has produced a number of paddling related books and videos. Joel and Ken decided that a joint effort was the way to go. Joel has many years of experience with paddling and I've got plenty of time on the water chasing fish from these little plastic boats. How hard could it be? Well, I now have a new respect for anyone who has taken on the task of writing a book. Without Ken's experience and steady guidance I seriously doubt we would've ever made it.

I may be a bit biased, but I truly believe this book will be a great tool for kayak fishermen. We set out to write a fairly simple how-to book for kayak fishing rookies. The various kayak fishing message boards were a great source for discovering just about every question a newbie kayak fishermen could ask. Between reading these message boards and answering questions at demo days and shows, it became evident that there was a need for a more detailed and comprehensive-style book. Neither of us will ever pretend to know everything there is to know about kayak fishing. Hell, I learn new things on every trip. But I do think that between Joel and me we've got a pretty good handle on it.

The bare rookie first-time kayaker will of course get the most out of the book. However, even the well-seasoned kayak fisherman can glean some very useful information in these pages. I know, because I did. Joel is a serious paddler. He's been on some big, bad water in his nearly 20 years of kayaking. I always knew I wasn't a technically correct paddler, but I got the job done. I never wanted to take the time away from my fishing to learn. Why should I? I always got to where I was going and back. It didn't take long on day one of the first photo shoot for me to realize I needed to improve. Watching Joel and Ken glide around effortlessly was a wake-up call. I wasn't exactly struggling, but it was obvious there was an easier way. Their strokes were easy and efficient.

That evening at the hotel room I went to my computer and read over Joel's sections on paddling technique. Forward strokes, turning sweeps, and draw strokes suddenly made more sense. The next day I put these strokes and techniques to use and it was pretty amazing. With just a little bit of practice my paddling experience became much more enjoyable. The long crossings into the wind are now a lot less work and my days on the water are less tiring. Turning my sixteen foot kayak was easy. Guiding my boat up alongside another kayak became a smooth maneuver. It was somewhat ironic that my own book taught me how to better enjoy this sport.

After the photo shoot trip I was so into the paddling aspect that I began working on becoming more proficient paddler. The thought of going to the water without a rod and reel never crossed my mind in the past. Believe it or not I now find myself going to the water just to paddle. I'm out there surfing along the beachfront and looking forward to hitting the rivers for a little whitewater. An Eskimo roll had never been on my "things to do before I die" list. Now I'm perfectly comfortable flipping upside down and popping back to the surface. The best part in all of this has been how much more at ease I am in a kayak. The confidence in my abilities has made my fishing days even more enjoyable.

Throughout this long and winding road from a simple idea to a completed book I've met a bunch of great people and learned quite a bit about writing, publishing, photography, and paddling. The book may only have me and Joel listed as the authors, but it couldn't have happened without a host of people helping us out. Everett & Pam Johnson, Dean "Slowride" Thomas, Brendan Mark and Charles Wright acted as our guides at the various photo shoots. We really appreciate everything you guys did to make those trips successful. Jock Bradley's incredible talent as a photographer greatly enhanced the look and feel of the book. It was easy working with Jock. He let us fish and got the shots without getting in the way. If you've ever tried to fish with a photographer around, you know it can be a daunting task. Ken Whiting and his staff at Heliconia Press have been working their tails off behind the scenes to make us look good. Thanks to each and every one of you. But most of all I'd like to acknowledge my wife and daughters for putting up with the all-night writing binges and the long trips away from home required to get this book in the net.