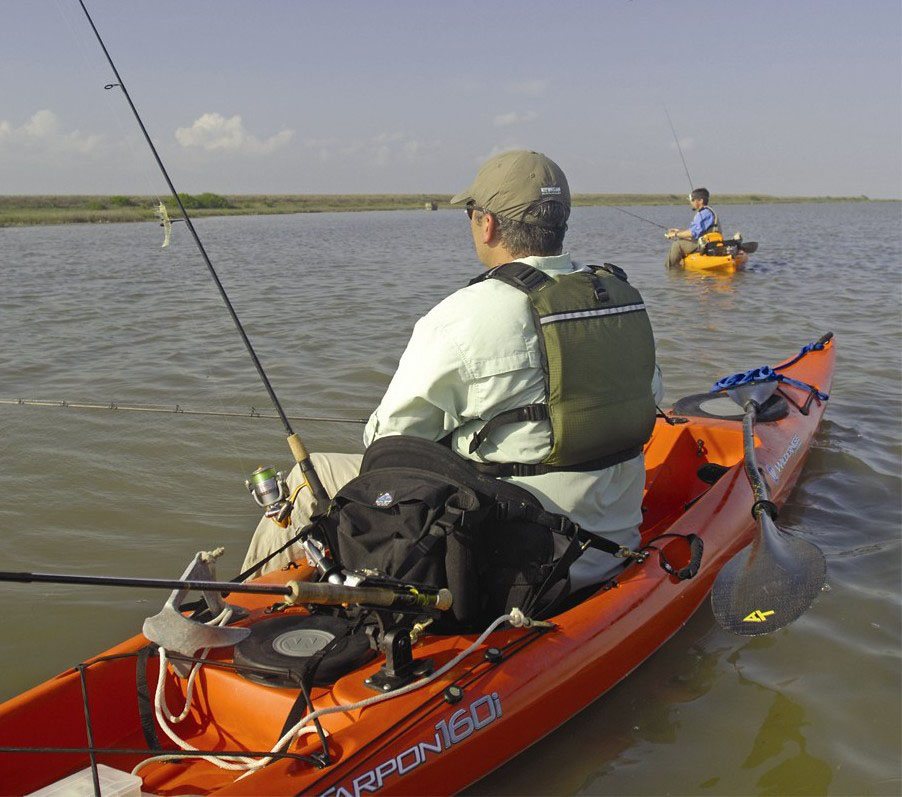 It seems like every time I'm on the highway I see more and more kayaks strapped atop SUV's and sticking out of the beds of pickups. As someone who's been involved in kayak fishing for many years it is amazing to see how our sport has grown. I recall a few years back hearing that this was a passing fad. Many old salts didn't seem to think it would stick. Well not only has it stuck, it has grown beyond what most anyone thought it would. And with the price of gasoline these days I fully expect to see more anglers turning to kayaks as an economical way to hit the water. In my opinion that's a good thing.

Yet at the same time I'm concerned. Many new kayakers come to the sport without much boating experience. Their knowledge of fishing may be up to par, but they've either relied on a buddy with a boat or they were waders and bank fishermen. A good number have never been the guy in charge of the trip. They haven't had to concern themselves with weather conditions, navigation, or preparing the safety gear. Nothing wrong with that but, from a safety and preparedness standpoint, I think a few things need to be addressed.

Kayaking is really a pretty simple activity. You put the kayak in the water, sit down, and start paddling. The simplicity seems to breed a certain amount of false bravado. There have been several recent incidents in the news illustrating this point. Young men in good physical shape have been lured into situations they weren't prepared for and the results land on the local news and internet message board second guessing. Given the ever-increasing popularity of the sport the number of serious incidents is quite small, but even one is too many when it could have easily been prevented.

It seems that every fatal incident, whether kayak or power boat, has one common denominator; no PFD. I'm not one to preach on the constant wearing of a PFD. I'll be the first to admit that I don't always wear one when I'm kayaking. For me, common sense dictates practice. When I'm fishing a shallow flat in good weather the PFD is stowed within easy reach. I reason that if it is a place I would comfortably wade, it is reasonable to think that I could handle an unplanned dismount. In almost all other situations you'll find me wearing one. There are simply too many things that can go wrong. Yes, I know that things can happen in shallow water too. And if you are in poor physical condition or have a medical condition that would warrant extra caution I would certainly suggest wearing one at all times on the water.

PFDs come in all shapes and sizes and a good fitting model built specifically for paddling is your best bet. These are designed with larger arm openings to allow for unimpeded movement during normal paddling activities. Spend a day paddling in a poorly designed PFD and you'll be reaching for the Gold Bond when you get home. Eventually an uncomfortable PFD simply won't get worn. Whereas with a comfortable and well-fitting PFD you'll soon forget you even have it on. My favorite model has no flotation on the lower back and allows me to sit comfortably against the seat of my kayak. Your PFD should fit snug, but not bind when you simulate a paddling movement. To further test the fit, place your thumbs under the shoulder straps and lift up. The vest should stay put. If it slides up, readjust the straps or try another model. When the time comes that you really need a PFD you don't want one that slides up over your head inhibiting your movements in the water. Try on several models and find one that feels good and fits properly before you plunk down your money.

I'd be remiss if I didn't also make mention of the growing popularity of inflatable PFDs. There are several models on the market in both manual and auto-inflate styles. The manuals require you to pull a rip cord while the automatic varieties deploy upon submersion. Both use a CO2 cartridge. They are very comfortable and easy to wear on a hot day. I'm just not so certain I want to trust my life to one. There's something about a blow-up PFD around hooks and other sharp objects that makes me uneasy. Should you choose to use one you need to be aware that by law you must be wearing it for it to count. That's right; a stowed inflatable does not count as having a PFD in the eyes of the warden. Also, try inflating it while you have it on. The replacement cartridges are cheap and an emergency is no time to find that it rides up over your head upon inflation. A friend recently deployed his by accident and discovered he didn't really like the way it felt.

While the PFD is probably the single most important piece of safety equipment, there are other items to consider. My personal list varies depending on the kind of trip I'm preparing to make. Obviously a quick outing to a local marsh for an hour or two doesn't merit the same planning and forethought involved in an overnighter across the bay. Similarly, the list will be different when I'm paddling past the surf into the gulf.

That said; there are certain items I always carry on every paddling venture. A first aid kit, flashlight, visual and audible signaling devices, and some form of communication are simply must-haves, even when I'm within sight of the truck. Longer trips will have me packing all sorts of extras, just in case. A GPS with spare batteries, a compass in case the GPS fails, extra clothes in a dry bag, a butane torch for starting a fire, and an extra knife are all good things to have in case things go south. I'm sure you can come up with a laundry list of convenience items, but the above are pretty much the essentials to get me through most any situation I might encounter.

Adequate ready-made first aid kits are available at most pharmacy and department stores, but you might want to add a few items or go to a sporting goods store to pick up one designed specifically for outdoor adventures. Given my personal history of mishaps I opt to put a few extras in my kit. With somewhat limited storage you obviously can't prepare for every eventuality, but you can cover most of the bases if you think it through. Waterproof bandages and tape are a solid choice to replace the wimpy band-aids found in most packs. Other additions to consider would include tweezers, scissors, and a bottle of that new liquid bandage stuff. I also carry a large bottle of peroxide to thoroughly flush any open wounds. Something else to consider is a good pair of side-cutter pliers capable of cutting hooks. Nothing is worse than gnawing on a hook buried in flesh with some rusty old needle nose pliers. Knock on wood, I've never been stuck beyond the barb but I've been present when it has happened to others and they've been very thankful when the side-cutters cleanly clipped the dangling lure. Spend a little time researching hook removal techniques and get comfortable with the idea that you might one day have to perform the task on yourself or a buddy.

The flashlights I carry are waterproof and they float. Both characteristics are critical in a watery environment. For visual signaling I carry three waterproof boat flares, a battery operated flashing beacon, and a CD for reflective signaling. Flares aren't required by law in a kayak, but if something goes wrong and you need to be found there is nothing better than an aerial flare. An audible signaling device is required by law. I've found small air horns unreliable. I used to carry one, thinking that it was a good idea. After a few months in the kayak I decided to test it out and was surprised to find it no longer worked. I now carry a couple of those extra loud whistles available at marine supply stores and paddling shops. One is attached to my PFD and the other is stored in my first aid kit.

For communication during an emergency you really can't beat a VHF radio. The USCG and all commercial vessels monitor channel 16 for distress calls. I know we all carry cell phones these days, but anyone who has been fishing with a cell phone knows that even a brief dunking can render it useless. Given that most emergencies on the water will likely involve some level of getting wet, I don't really want to trust my safety to such a fickle piece of equipment. Handheld waterproof VHF radios aren't really all that expensive compared to the money we spend on our rods, reels, and other gear. There's a good tip I recently picked up regarding cell phones that I'd like to pass along. With more and more people choosing the higher priced Blackberries and I-Phones, it only makes sense. Either keep your old phone or go buy one of those cheaper pre-paid phones from your service provider. Switch out your SIM card to the cheap phone and carry it while fishing. It won't hurt nearly as bad when (not if) you submerse your phone. It happens. Should you decide to forego the VHF, at least program the numbers for the USCG search and rescue into your speed dial. The Galveston sector office covers the upper coast. Their emergency number is 713-671-5113. For the middle and lower coast the Corpus office is 361-939-6349. The 8th district SAR coordination center is based out of New Orleans and covers the entire gulf coast region from the Florida panhandle to the Mexico border. It can be reached at 504-589-6225. Of course you could always try your luck with 911, but I'd prefer to be in immediate direct contact with the folks coordinating my rescue.

All of these items and whatever else you elect to bring with you for your peace of mind won't do you any good if you can't find it or it gets soaked. In the event of an emergency you need to instinctively know exactly where each item is located. Make it a habit to always pack your kayak in the same manner for each trip. Pack any items you need to keep dry in a waterproof container even if it is stored inside your hull. Every important piece of equipment on my kayak is tethered in some way whether it is inside the hull or riding in the tankwell. I don't want to open my hatch and find that my first aid kit has slid to the inaccessible reaches inside the hull. I learned that one the hard way years ago when I found the toilet paper was lodged under my seat at a very inopportune time.

The bottom line is every individual needs to carefully consider their physical condition, the environmental conditions they might encounter, and any situation that may occur during the trip and plan accordingly. You may also want to check out the Red Cross and American Canoe Association websites for courses in basic paddling and first aid. Be safe out there and remember that no fish is worth your personal safety.