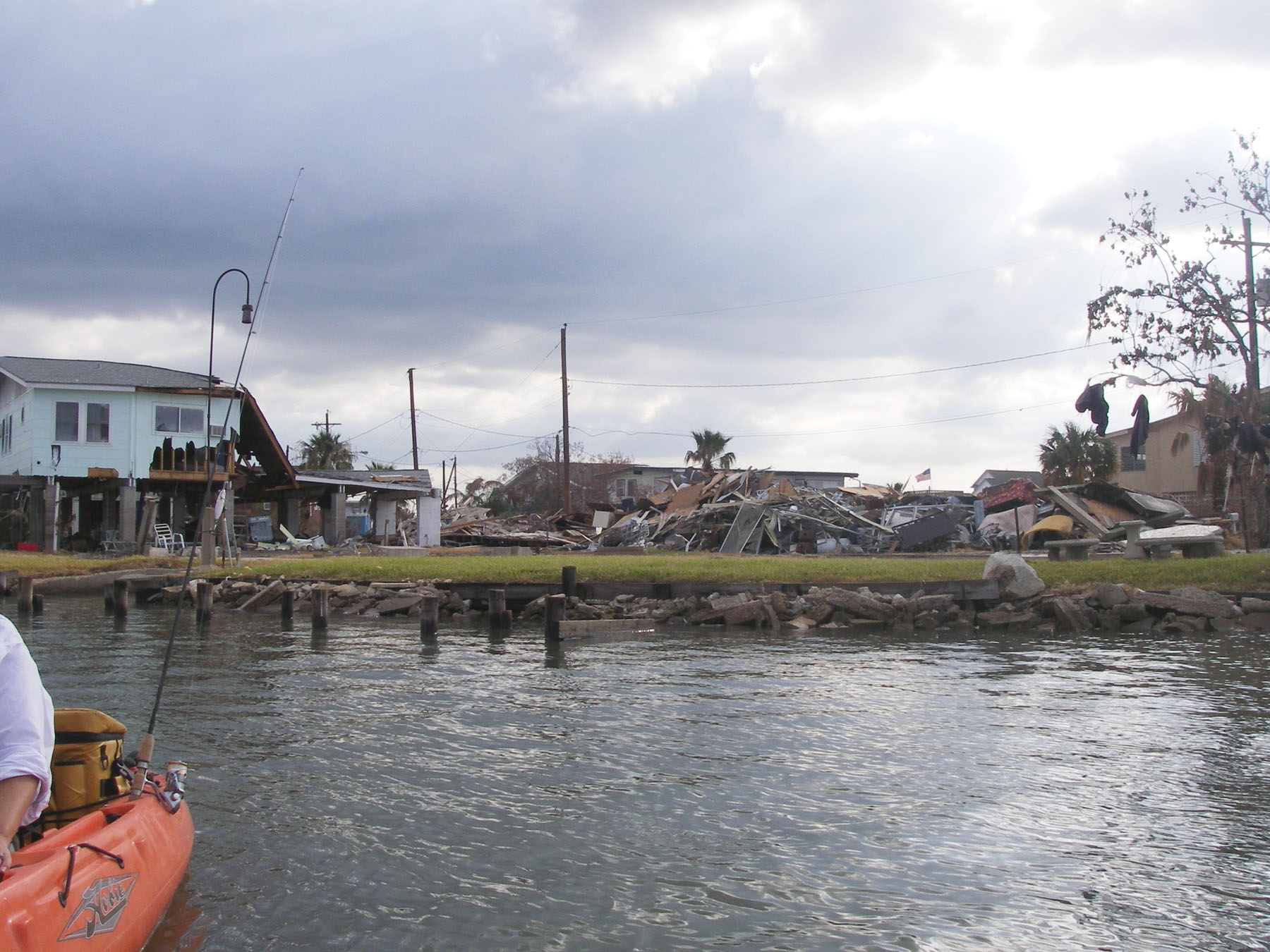 This was a house before Ike.

I'm ready for a new greeting. "Got power yet?" is getting pretty old. I can't wait until my friends ask, "Been fishing lately?"

After a couple weeks of dealing with the aftermath of Ike I was itching to get back on the water. My family was lucky. We suffered some damage and inconvenience that under normal circumstances would seem fairly major but it was nothing when compared with what many others suffered. Seeing the pictures of the homes and properties of friends on the fishing message boards was quite sobering. My worries pale in light of those who lost everything.

But life goes on. And so it was with some sense of hope and a touch of dread at what we might find when my wife and I headed to one of my favorite marshes. It was going to be a long distance scouting trip so we opted to try out a pair of Hobie kayaks with Mirage Drive and pedal instead of paddle. I'd been wanting to try these boats for a while but it always seemed the rental boats at Fishing Tackle Unlimited were booked when I wanted to go. Finally, a free weekend and availability of the kayaks coincided.

The wind damage on the drive south was plainly obvious and increased by the mile as we drew closer to the Galveston area. The real shocker came when everything turned brown. Dead trees, dead grass, dead everything; nothing was green except the palms. It was disheartening to say the least and pretty amazing to see how far up Highway 6 Ike's surge had reached. A bit of fear crept into my mind about what shape we'd find the marsh. I relish my hours spent there. It is where I go to get away from everyday cares and recharge my batteries.

Camille and I unloaded the kayaks and were preparing to head out when a truck pulling an airboat arrived at the ramp. A large sign on the back of the boat read "EPA Emergency Response." Not exactly what you want to see when launching for a fishing trip. However, they headed north and we were going south, so that makes it better, right?

Once the yaks were ready, I did the gentlemanly thing and offered her the choice of boats. She picked the shorter and higher-riding Outback SUV saying she thought it would be easier to maneuver through the marsh. I think it was because she wanted to be higher and drier after seeing the EPA folks. That's alright, I like longer and faster kayaks anyway and I wanted to see if the sixteen foot Adventure could live up to the billing.

Within a few minutes I was comfortably scooting along. I wasn't so sure I'd like pedaling instead of paddling, but it was pretty cool. From the look on her face, Camille was enjoying it too. It felt great to be out on the water again.

The Hobie Mirage Drive system consists of cockpit pedals that connect to a pair of rubber flippers under the hull. By pushing the pedals back and forth you propel the kayak forward at surprising speed, quite a bit faster actually than my normal paddling pace. I can get my Tarpon 160 going pretty good for relatively short bursts, but with the Adventure I could easily maintain that speed. The boat felt quite seaworthy and ideal for covering longer distances to the fishing grounds which would definitely enable kayak fishers who do not paddle often to increase their range. Depending your body weight and the amount of gear you carry, it seemed the draft of the Adventure under peddle power would be about 13 to 15 inches and about 3 to 4 inches with the peddles in the "up" position which qualifies it for most folks' fishing styles.

Upon rounding the turn in Highland Bayou the Bayou Vista area came into view. No matter how many photographs you see of Ike's handiwork nothing prepares you for viewing the devastation firsthand. Many of the homes were still standing, some were missing huge sections and others were simply gone. None escaped unscathed.

The home of Connie Mack, owner of Creative Feathers Taxidermy in La Marque, has always been a place I enjoyed for a quick visit when passing by after a fishing trip. It's a fairly common sight to see him out there on his raised deck waving me over for a fishing report or to provide a tip on where I might try next. As familiar as the place is to me, I had a hard time picking out his house. The deck and boathouse under it are gone and only the pilings remain of the homes on either side. Camille reminded me that Connie had said the authorities condemned the house and had wrapped it with red tape. That was about the only way I could confirm its identity. Heavily damaged is an understatement. I can't begin to comprehend how it must feel to see your home of 32 years in that shape. Connie, however, has pledged to rebuild it bigger and better than before. Knowing him, I have no doubt. The man loves living on the water and won't let a storm change that.

The marsh directly across from Connie's place has always been good for a few reds so we headed over to give it a shot. The marsh itself looked pretty good. Plenty of bait and the marsh grasses were standing tall. Other than scattered debris the water looked decent enough. Within a few casts I had a bump, followed by another, and then a steady pull. Fish on! Okay, it wasn't all that big. It was just a relief to catch that first fish, even if he wasn't much bigger than my lure. I wouldn't normally take a picture of such a pip-squeak, but this little guy made my day and I wanted to remember him. After subduing a second mighty beast we decided to head further into the marsh for a better look.

This is where I really wanted to check out the Hobie. I spend the majority of my time in shallow water, too shallow to use the Mirage Drive as it extends well below the hull. The system is designed to allow you to enter shallow water by pressing one of the pedals all the way forward which places the fins up against the bottom of the kayak. I wasn't sure how well the boat would handle under paddle power. No worries. The craft handled just fine. It was easy to paddle across the shallow ponds and maneuver through the winding bayous and the draft was shallower than I had thought it would be. I was easily able to pursue reds through areas where their backs were exposed.

Reaching some remote lakes of greater depth we had a chance to flip the pedals back down. Creeping slowly along deeper shorelines and grass beds with rod-in-hand is definitely where the peddle drive system shines. Any sign such as busting bait, swirls, or wakes, which might indicate the presence of feeding fish can be targeted immediately without worry of switching between paddle and rod. When a fish is hooked, a flick of the rudder and use of peddle power can be used to fight the fish away from the school or structure, making it easier to return and try for another.

Making headway against the wind, especially when returning from a strenuous day of back-country fishing, is perhaps the greatest advantage of a peddle boat. All too often we let our excitement lead us too far and the paddle back is a killer. Leaning back in the seat and letting your legs do the work is pretty cool.

Yes, the back marshes had plenty of reds. It was great to see them back there doing their thing like Ike had never happened. There were thousands of tiny shrimp along every shoreline. As a red would cruise down the edge of the salt grass it would look like rain as all the little shrimp fled ahead of them. It was cool. The marsh itself was looking great. The salt grass was seeding more than I've ever seen, the soft mud choking some of the dead-end ponds was gone, and there was hardly any debris. It was as if the storm surge had scoured it clean for a fresh start. Mother Nature has her ways I guess. The last couple of weeks have been pretty tough, but rest assured it's going to be alright.

To learn more about Hobie kayaks go to www.hobiecat.com and click on kayaks. You can get a firsthand look at Fishing Tackle Unlimited in Houston and Seaworthy Marine in Rockport; tell 'em we sent you!