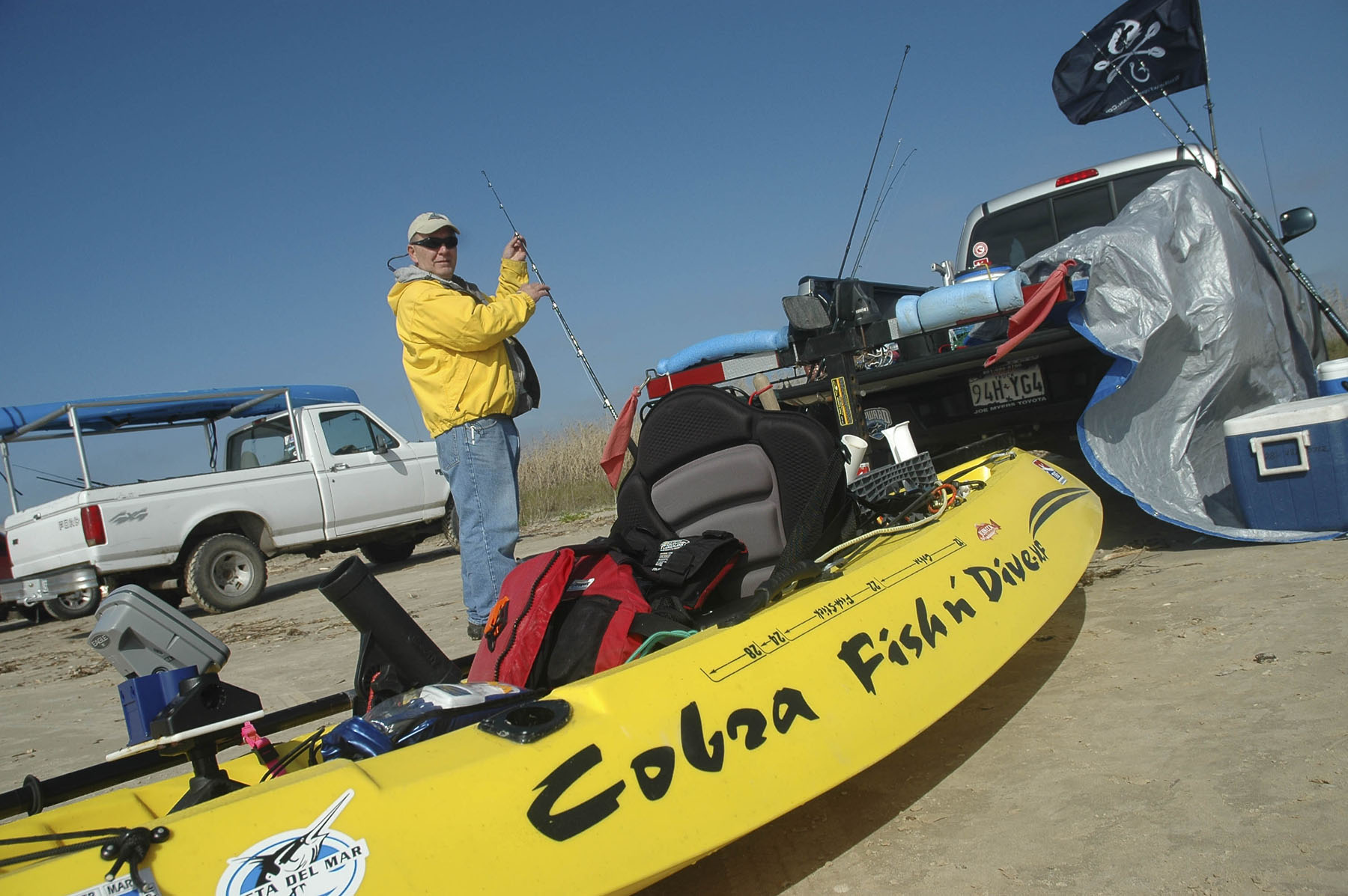 I'm amazed that this kayak fishing thing is showing no signs of slowing down. I recall a conversation several years back; an industry insider flatly stated that kayak fishing was a passing trend. He figured sales would peak in a couple years and then decline. It only seems logical that eventually everyone who wanted to get in would have done so by now, yet every day I see at least one newbie on the texaskayakfishing.com forum asking what boat to buy. So from where I stand the sport looks to be healthy and growing steadily. I did an article on this subject a couple years back, but based on the number of questions about what boat to buy, what paddle to use, and what accessories to add; I figured it was time to revisit the subject.

It seems that the number one concern for newbies is stability. People who have never been on a fishing kayak liken them to what they've seen on television. That is, guys in skinny touring boats or whitewater yaks doing Eskimo rolls. The truth is; your typical sit-on-top fishing kayak is a very stable craft. I've spent hundreds of hours on various kayaks and I've yet to fall out of one. Okay, I've fallen off a couple times while standing and poling, but that doesn't count. Suffice to say if you have a decent sense of balance, stay out of seriously choppy water, and don't do anything crazy, you'll most likely stay right side up. Running through the surf is a whole different subject, but still not an impossible task with practice and good instruction.

There is no perfect kayak. If there was we'd all have it and there would be no need for this discussion. The typical kayak most commonly used for fishing is a plastic sit-on-top. There are dozens of models with the majority falling between twelve and sixteen feet and anywhere from about twenty-eight to thirty inches wide. Some models offer greater stability, but none would qualify as tippy.

A good general rule is that length equals speed and width equals stability. A longer kayak tracks straighter while a shorter boat will be more maneuverable. Many fishermen end up with more than one kayak to cover different conditions. Kayaks are relatively inexpensive when compared with powerboats so owning more than one isn't cost prohibitive. You may borrow that line when you talk to the boss, but I cannot promise you'll obtain an authorization to purchase.

When people ask what kayak is best, I usually respond with a question. "What kind of fishing do you like to do?"

You really need to be honest here. Most folks have grand ideas about what they "might" do, but in reality they are going to be fishing the same general areas using methods they're most comfortable with. I suggest your first kayak should be right for what you intend to do most often, not what you might do occasionally. Are you going to use the kayak to access some far-off shoreline and then get out and wade? If so, you might want to get a long, narrow kayak that tracks straight and covers water efficiently.

Are you headed into the back marshes through narrow, winding bayous? If so, you might want a shorter, more maneuverable kayak.

Are you drifting the crystal-clear flats looking for cruising reds? You might want to consider a wider and more stable kayak that allows you to stand up and sight-cast while poling.

Will you be transporting your kayak in a powerboat? Then go with a shorter boat that is easier to load and unload.

If you're like me, you'll be trying all of the above and you'll likely end up with more than one kayak or perhaps settling for the best compromise. For example, if you fall into the category of wanting to cover a lot of water then you'll want one of the longer, more efficient boats. Something along the lines of a Wilderness Tarpon 160, Ocean Prowler 15, or Perception Search 15. For super stability while standing and sight-casting I'd look at the Wilderness Ride, Native Ultimate, or maybe the Malibu X-Factor. The guys who prowl the surf often lean toward the Cobra and Malibu brands.

Most boats fall somewhere in the middle and the 12 to 14 foot kayaks from the major manufacturers are great all-around fishing machines. Each model has different characteristics that appeal to different buyers. Nobody can honestly tell you which model will be perfect for you. The good news is that most of the dealers will have some sort of on-the-water demo day where you can try several. Short of that you can beg, borrow, or rent different kayaks to get a feel for what you like. And don't sweat it if you simply cannot try one out. I know this will go against popular opinion, but you really can't go wrong if you buy one of the top-selling models from a quality manufacturer at a reputable dealer. Honestly, these kayaks hold their value fairly well and if you later find that a different model suits your fancy you won't be taking a huge hickey when trading.

Another subject that comes up often is tandem kayaks. Couples are usually the ones most interested here. These can be great boats for recreational paddling and sightseeing, but for fishing I caution against this route. A fourteen foot kayak just isn't long enough for me to feel comfortable with two people fishing. I can see a parent paddling while a child fishes from the front, but the math involved in two adults swinging seven foot rods with treble-hooked lures doesn't add up. Do yourself and your marriage a favor, get two kayaks.

Now on to the next big decisionto rudder or not? I know there are folks who will disagree, but the only reason I see for not getting a rudder is the cost. Is a rudder absolutely necessary? No. Is a rudder a handy tool to have? Yes. All of my fishing boats have rudders. While they do come in handy for maintaining a straight track during crosswinds, that isn't the main one for me. I use it for drift fishing the flats.

Picture your favorite flat with sandy potholes scattered about. I want to hit as many as possible. Without a rudder I have two choices. I can make a straight downwind drift hitting those within reach, or I can reposition constantly with the paddle. When the paddle is in my hands the rod isn't. With a rudder and I'm steering from pothole to pothole with my feet and casting. This gives me two or three times more casts than switching between paddle and rod and more casting equates to more fish. Same thing when fishing a shoreline. Given the right wind direction I can easily maneuver the boat without the paddle.

Speaking of paddles, after selecting a boat, the next big decision is your paddle. Paddles come in many shapes, sizes, and materials. If you want to start an argument just bring up the subject of paddles. There are many technical aspects to blade design, but I'll just talk in generalities here. To get specifics you really need to see and feel while talking with a knowledgeable salesman or veteran paddler. The average paddle used by kayak fishermen is a two-piece model between 220 and 235 cm length. It will also likely have the option of feathering, or off-setting the blades from 0 to 45 degrees. In general the lighter the paddle the more expensive. Entry level paddles can be had for as little as $40, while a high-end, light-as-a-feather touring model easily reaches $300. So what the heck is the difference? Materials and weight drive performance and price.

Paddle shafts come in wood, aluminum, fiberglass, and carbon fiber. Some shafts have Kevlar for added strength. The majority are straight-shafted while a few companies offer ergonomic grips. The blades can be constructed of wood, plastic, fiberglass (not truly fiberglass, but close), and carbon fiber. Solid wood paddles are beautiful and have their fans, but they aren't used widely among kayak fisherman on the Texas coast.

Entry level paddles have aluminum shafts and plastic blades. Their greatest attribute is price. They are heavy and inefficient when compared to better paddles. A plastic blade can flex when swept through the water and power is lost as water slips off the tip. Think of it as spinning the tires on your truck. Some plastic blades are better than others based on shape and design.

The highest priced paddles use carbon fiber materials. These paddles are extremely light with very stiff blades. They are the best of the best and you pay the price. Some guys want to get by cheaply while others insist on the best. The majority settle somewhere in the middle. Again, you need to know what you plan to do. If you don't think you'll ever get out of sight of your truck then you can get by with most any paddle. Then again, if you think you'll be heading across the bay to the far shoreline you might want to rethink that $40 paddle. What I've seen over the past few years is that guys tend towards the lower end when getting started and then upgrade after a year or two. If you can squeeze it into the budget, pick a better quality paddle.

Once you've settled on the right boat and paddle you can begin playing with the rest of your rig. Padded seats, rod holders, anchors, etc, etc. Some guys go the minimalist route while others have every gadget screwed to their boat. The real beauty of this sport is that everybody can do his own thing and not break the bank doing it.