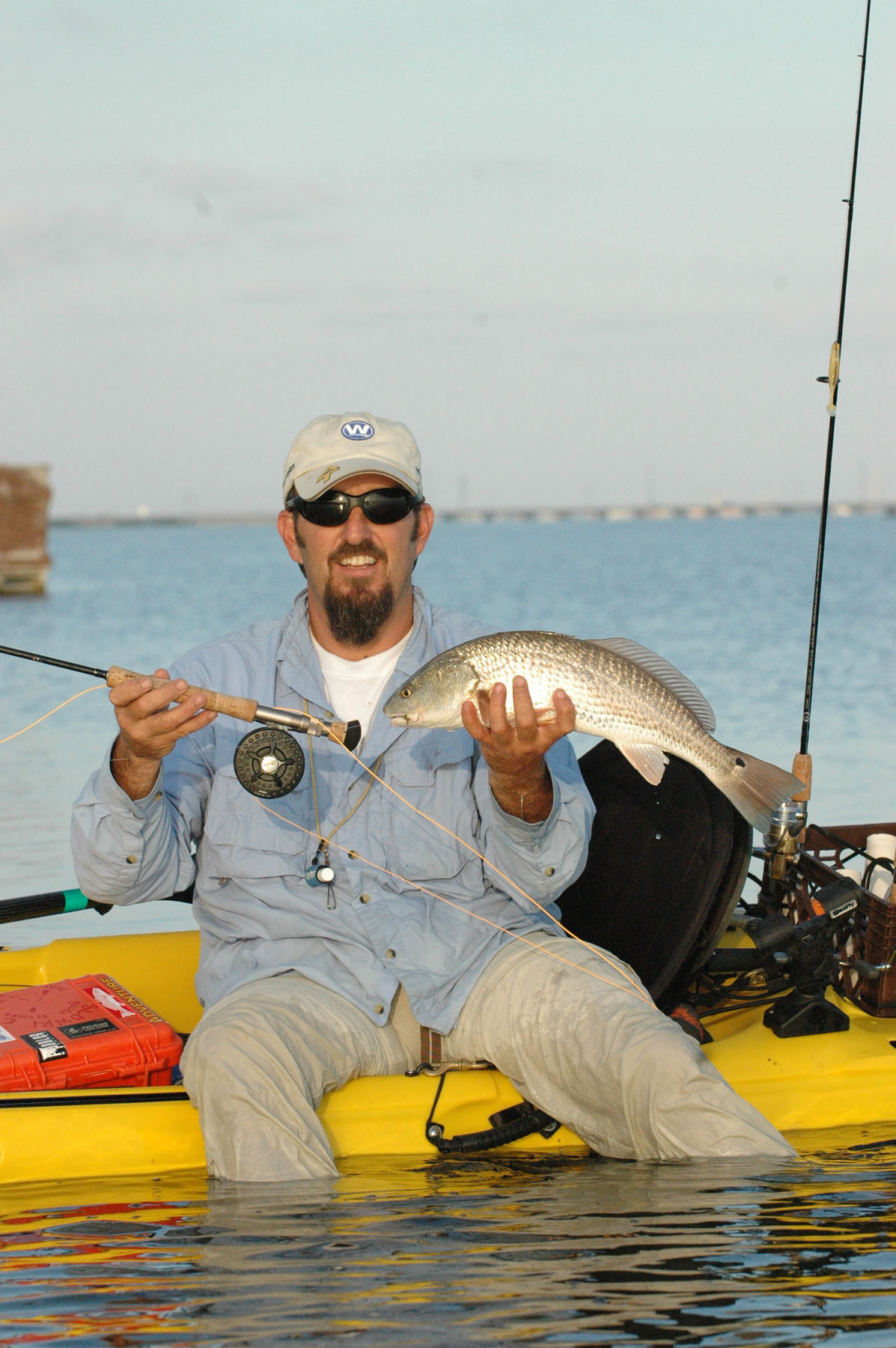 Was it just me or did the wind really blow harder and longer this spring than in past years? It seemed like every time I got a chance to slip out on the water during the last three months it was blowing nearly hard enough deserve a name. Well the spring winds have finally subsided and the fishing has busted wide open. I've had three straight weekends of perfect conditions and I hope the streak continues. Of course in another few weeks we'll probably be wishing for a little breeze to break up the dog days of summer.

During this nice run I got a chance to get out on the water with my good buddy Dean "Slowride" Thomas down in Aransas Pass. Between his busy guide schedule and my road warrior job we don't get to fish together nearly enough these days. I was in the area when Dean called and said he had just gotten a cancelation for the following day. I wondered aloud why the heck anybody would cancel with a forecast for ice cream conditions. Typical Dean response, "I guess some folks prefer a challenge."

For once the weather-guesser was dead on. The bay was mirror slick and the skies were clear. Dean brought along a couple of the new Tarpon 160's. I've been contemplating retiring my old T160i in favor of one of these new models, but hadn't had a chance to water test one yet. We loaded up and headed across the channel for the flats of South Bay on the edge of the Lighthouse Lakes. The sunrise was absolutely awesome reflecting on the mirror slick surface. I was just getting into the calming rhythm of paddling when the first wakes appeared out in front of us. There was no mistaking these broad-shouldered v-wakes for mullet, these were reds. Dean reached for his rod rigged with a Spook Jr and I reached for my camera case. Dean says, "Cool. You haven't gotten to take my picture in forever."

His cast was perfect and the dancing topwater was twitching along a few feet ahead of a cruising red. I was watching through the viewfinder hoping to catch the inevitable explosion when the wake disappeared. What the heck went wrong? That was the perfect set up. I foolishly lowered the camera for a second. The fish emerged from behind the lure like a surfacing submarine and absolutely crushed it.

"Fish-oooon." Nobody says that quite like Dean and no matter how many hundreds of times I've heard it I still laugh. That'll never not be funny.

As we moved on across the flat the wakes kept coming, but these fish didn't want to play. They'd follow the topwater and make a brief appearance before turning off. We probably could've racked up an impressive tally with some soft plastics, but the allure of the topwater explosion often overrides common sense so we kept pluggin. That changed when the first glints of tails appeared in the distance. Those unmistakable mirror-like flashes trump waking fish every time.

As we quietly closed the distance it became clear that this was a big school of reds happily drilling to China. These fish were completely preoccupied with the school of shrimp they had located in the grass and could not be troubled with presence. It was the perfect time to get a picture I've always wanted. Dean got situated and un-holstered the fly rod while I eased past the fish in a wide circle to get on the opposite side. The rising sun was going to be at my back lighting up the tails with Dean in the background casting to them. I could already see the cover shot in my head. Just a couple more paddle strokes to goand then I heard it, the sound of a fly line whipping through dead calm air. Like a kid on Christmas morning he just couldn't stand waiting a few more seconds to unwrap his present.

I swung the camera up in time to catch the water-bulging take followed by the zigzagging roostertail of a hooked red. What the hell? All he could do was shrug his shoulders and laugh like a maniac. Through the laughter he says, "You took too long- I couldn't stand it. Don't worry, there'll be more."

"Not if I see 'em first," I shot back. And of course there weren't any more. We searched high and low finding nothing but a few cruising singles.

But that's alright, it was a great morning on the water with one of my favorite fishing buddies in one of my favorite areas. And, I got a good feel for the new boat. It looks like my trusty old steed will be put out to pasture soon.

The new T160 is an impressive kayak. I've always been partial to the sixteen foot Tarpon and was willing to put up with a little water in the cockpit and tankwell because of its paddling efficiency. The new model paddles just as nice, but has a slightly higher floor and freeboard that keeps the cockpit and tankwell dry without affecting the performance. I weigh in at just over 200 lbs and loaded the boat with a fair amount of tackle, drinks and a heavy camera case. The water line was still well below the mid-point of the scuppers. Between that, the new easy access hatches, a more comfortable seat and a few other ergonomic improvements; I'm sold.