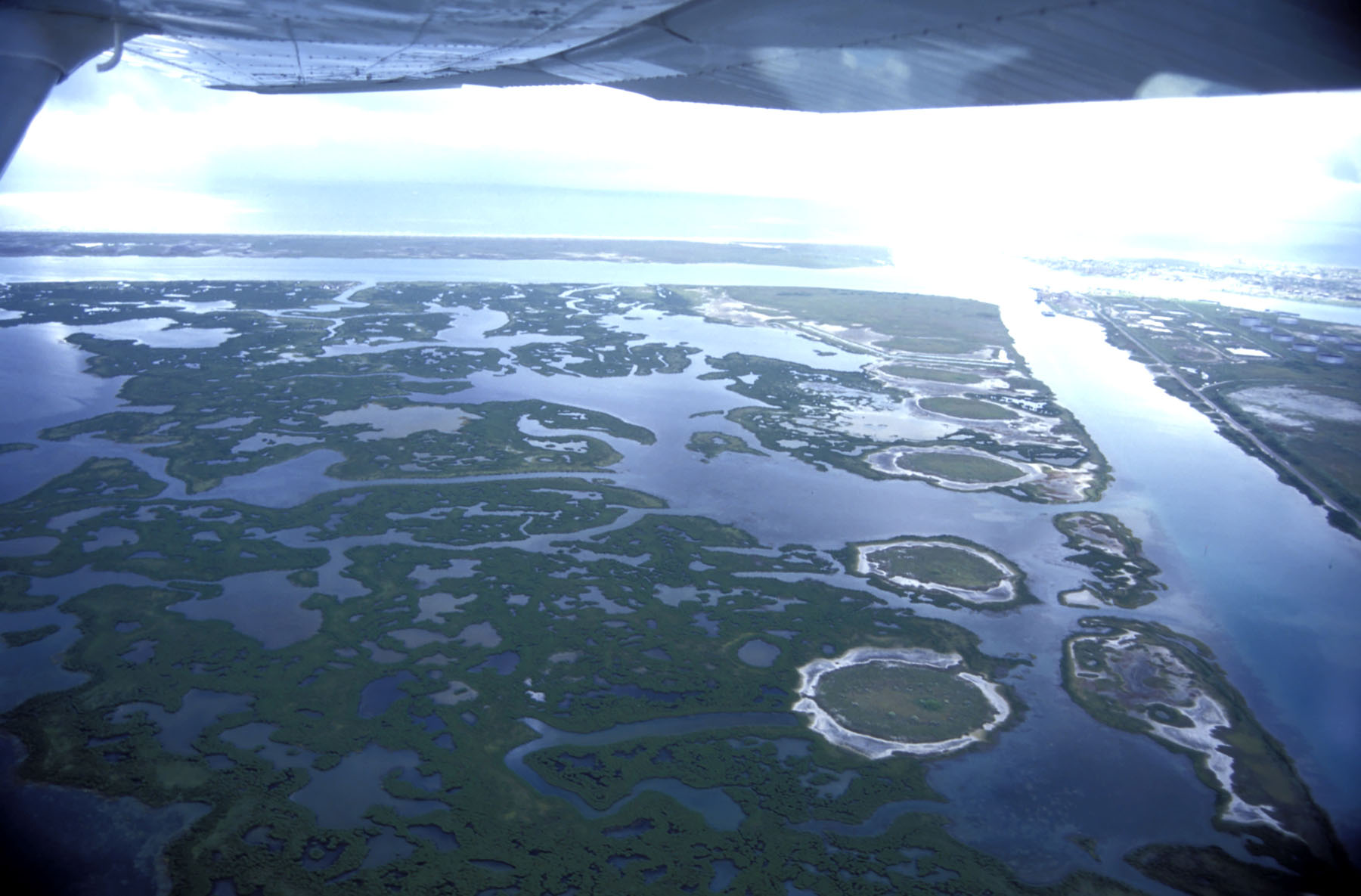 Lighthouse Lales and Aransas Channel.
Where's your favorite place to kayak fish? That's a question I get all the time and it's really tough for me to answer as I enjoy all kinds of fishing and exploring new water holds a special place in my heart. There's something very satisfying about going into a totally new area and unlocking the secrets. As a result of my wanderlust I've been privileged to paddle and fish in some great water all over the country. Favorite place??? Hell, I can't hardly narrow it down to under a dozen. Everglades City, the Chandeleur Islands, Miguel Bay near Tampa, the Ottawa River in Canada, Mexiquita Flats outside Port Isabel, the Cullen House, East Flats near Port Aransas, Brown and Root Flats, the entire south shoreline marsh of East Matagorda, Shoalwater, Power Lake, Powderhorn, and then there are all the places around the Galveston Bay complexsee what I mean? I've got some fond memories in each of those areas and could easily make a case to justify any of them as my top spot.

As much fun as it is to poke around in unknown regions, there is also something to be said for fishing an area you know like the back of your hand. Consistently predicting when and where the fish will be on your favorite body of water can be equally as rewarding. I get that. But to me, a number one favorite place needs to offer more than just great fishing. It needs to be an area that is simply a joy to paddle even if I strikeout in the fish-catching department. So, when I get pinned down by someone who is really persistent, I have to go with the Lighthouse Lakes.

Launching off of Highway 361 and heading into the Lakes gives me the best of everything. I can stick to the flats I am most familiar with and have a great chance of locating tailing reds. I can head off to the big lake drifting the deeper grass beds for consistent trout action. Or if I'm feeling adventurous I can paddle into the little creeks and disappear into the maze of mangroves exploring some of the hidden treasures that seldom see an angler. There aren't many places around that offer so much diversity with such easy public access.

I still recall my first experience in Lighthouse Lakes. My dad and I had been fishing the Brown & Root Flats along the south side of 361 and although I had been frequenting the Aransas Pass area for years in a power boat, this was my first kayak trip. I knew of the Lakes, but the wide open B&R Flats was much less intimidating. At some point we got adventurous and paddled under the bridge and into the outer edge of the Lakes. We eased into a small creek that opened to a shallow oyster-studded pond and paused to figure our options and have a snack. While we were sitting there I heard a commotion in the far corner of the pond. It was a huge redfish, obviously above the slot, and he was thrashing the shoreline like a hog in a wallow. Within moments he was prowling toward us with his back out of the water looking for his next victim. Dad graciously gave me the nod to go after him. I mentioned the oysters, but I forgot to say this place had a goo bottom that swallowed my legs with every step. So off I went like a bull plowing through a swamp. Somehow this red didn't figure out he was being stalked. He was either the dumbest red in the bay or he was just so bold he didn't care. Either way I managed to get within casting range and plopped a topwater a few feet in front of him. Not the best cast, but it didn't matter. The red threw a huge wake as he rushed to crush the lure. After a few moments of surging power it was over. The oysters had conspired to aid in his escape. Dad was amused and I was permanently hooked on fishing this place.

Since that encounter I've been back too many times to count and each trip is special in its own way. There have been days when the tailing reds were so numerous I never got out of earshot of the highway. There have also been times when the fishing wasn't so great, but the trip was counted as a complete success anyway. How can you paddle across gin clear water through a forest of mangroves in the company of reddish egrets, blue herons, and roseatte spoonbills without smiling at your good fortune? Some of my most relaxing trips have been spent paddling far back into the trees with no particular destination in mind.

The Lighthouse Lakes gets its name from the Lydia Ann Lighthouse located on North Harbor Island and visible from anywhere within the lakes. It is an expansive estuary of bayous, shallow lakes, and black mangroves. The bottom ranges from hard sand to nasty mud interspersed with grass beds and oyster reefs. The area is roughly a triangle within the Redfish Bay complex bounded by Highway 361, the Lydia Ann Channel, and Corpus Christi Bayou.

In 1999 the area became the first designated paddling trail on the Texas coast. TPWD Director Dr. Larry McKinney and TPWD biologist Dr. Bill Harvey collaborated to push the project through to completion. The popularity and success of this first project led to an ongoing program establishing a series of trails all along the coast. The Lighthouse Lakes Trails consists of three main loops of varying lengths. The trails are marked with numbered sign posts. Maps are available showing the trail routes as well as the locations of the sign posts. The marker numbers correspond to GPS coordinates provided at the bottom of the map.

There are several put-in points along Highway 361, but the two most popular are located near the Crabman Marina and within the Lighthouse Lakes Trail Park. From the intersection of Hwy 35 and 361 in Aransas Pass, the Crabman is approximately four miles down on the left. The park entrance is approximately one mile further down 361. A small brown highway sign directs you to the park entrance. There is ample parking with easy access to the water at both locations. The Crabman charges a nominal fee for launching and parking.

The South Bay Loop is approximately 6.7 miles in length. The starting point is marker 59 directly across the Aransas Channel (also known as the Shrimpboat Channel) from the Crabman. This trail skirts the outer edge of South Bay and takes you into the upper edges of the Lakes. Much of the trail is through fairly open water with few windbreaks. It is preferable to take this route on calm days. The terrain is mostly grass flats with scattered sandy potholes. I've had good success finding small pods of reds tailing along the mangrove edges and spotting singles cruising the open flats. The trail takes you past a group of islands along the edge of Corpus Christi Bayou. Poke around the edges of these islands and you'll likely find a few reds hanging around the oyster beds that are scattered throughout the area.

The Cutters Loop is approximately 5 miles long. It takes you on a short tour through the center of the Lakes. The starting point is at marker 60 directly across the channel from the park entrance. It is a good choice on windy days as it is protected by the mangroves. The ponds and lakes along this route are great places to search for pods of tailing reds. Being the shortest and most centrally located trail, it tends to get quite a bit of use on weekends. If you are hoping to find tails you might want to try this trip on a weekday.

The third trail is the Redfish Loop. It is 6.8 miles in length and takes you deep into the Lakes. The trail begins at marker 1. The launch point is a bit further down 361 from the park. There is also a cool little side trip you can take off of this trail called the Electric Lake Loop. It is a 1.25 mile detour that takes you into a cool little lake that sometimes holds reds on higher tides. This trail also leads through the two largest lakes in the system. I like to make a few drifts through these lakes for mixed bag of trout and reds. One of the largest schools of tailing reds I've ever seen was in the middle of the large lake adjacent to the lighthouse. You are likely to find tailing pods at any point along this trail so keep your eyes open.

Keep in mind that these trails are not etched in stone. All three of the main trails overlap and can be combined or shortened easily. When I first started exploring the area I used the sign posts to keep my bearings, but I seldom followed the trails. Half the fun was trying to go into new places that few people frequented. I'd usually head off into the bushes along the one of the bayous and then pop out into a pond. Eventually I'd run into a marker somewhere that would let me know where I was on the map. I would imagine it was pretty easy to get turned around in there before the trails were put in, but these days navigating the area is fairly easy when using one of the aerial maps. But if you're the type who gets lost easily you might want to bring along a GPS and plug in the coordinates of the trail markers.

Or you could hire a guide. One of the most popular kayak guides on the Texas coast spends many of his days roaming through the mangrove maze directing kayakers to the best fishing areas. Dean "Slowride" Thomas (slowrideguide.com) has been guiding on these waters for several years and can really shorten the learning curve for those wanting to learn the ins and outs of the Lakes. A relative newcomer to the kayak guide business is Jason Brou (www.tripleboutdoors.com/brewskieshome). I haven't yet had the chance to fish with Jason, but I've heard from reliable sources that he knows his way around the Lighthouse Lakes and can put you on some fish.

As with any location, there are certain hazards you need to be aware of. The Aransas Channel runs parallel to highway 361 and you must cross it in order to access the trails. The channel is a major highway for powerboats and you need to be cautious in timing your crossing. This is also a major waterway leading directly out through the Aransas jetties. Strong winds and/or currents can make for rough trip across the channel. Wear your PFD and be prepared to paddle hard. I've seen more than one person turtle in the channel due to wind, waves or boat wakes. Once you get inside the trails you are generally away from power boats. The two larger lakes get a few shallow draft boats in them from time to time, but the smaller satellite ponds seldom see fiberglass. Airboats are a different story. The duck hunting in the area can be fantastic and you'll note there are many duck blinds scattered throughout the trails. Throughout the duck season the hunters use airboats to access these blinds. Luckily airboats sound somewhat like a 747 landing in the marsh so they can't really catch you off guard. Should you hear one coming your way you might want to hold your paddle high and wave it to let them know you are there. You may also want to give a wide berth to any of the duck blinds surrounded by decoys.

Be safe out there and take good care of my favorite place to paddle.