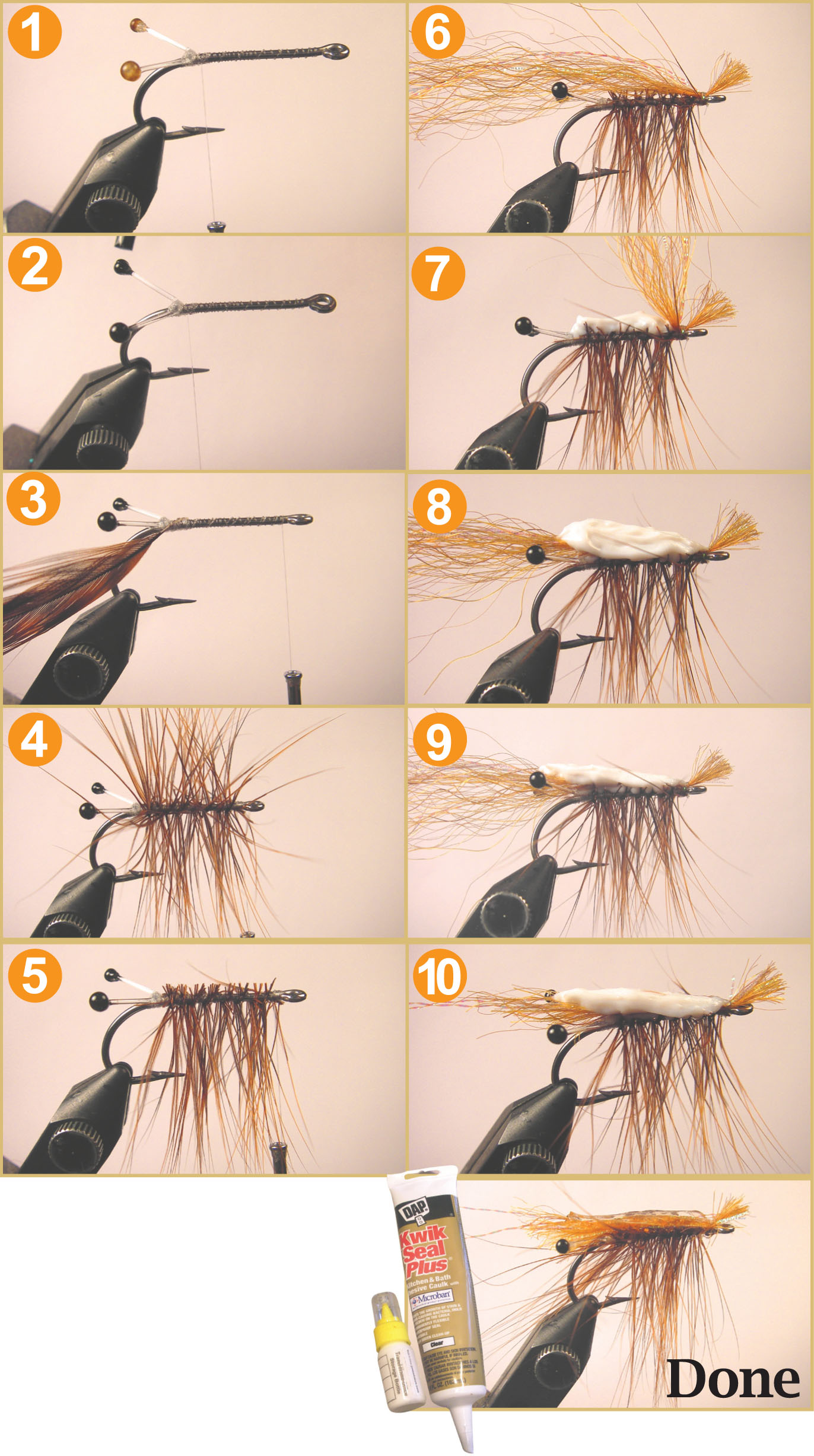 My friend Barry Evans from Granbury, TX ties a fly he calls the DAP Shrimp. Barry's fly is somewhat similar to the wildly effective Popovic's Ultra Shrimp, but there is one key difference. Barry uses DAP Kwik Seal Plus adhesive rather than epoxy to form the carapace of his pattern. Why? Primarily because DAP is a water-based. It lacks the noxious solvents and catalysts found in 2-part epoxy. Another reason is that DAP is viscous and stable. It will not run, sag, or drip. Flies coated with DAP do not have short working times and do not require a rotisserie turner to hold their shape while they cure.

But there is, however, a little learning curve in tying Barry's pattern. For example- the carapace on Popovic's Ultra Shrimp is formed from synthetic fibers that have been saturated with epoxy. As the epoxy penetrates the fibers, they turn clear and are bonded together in a "fiberglass" effect. To correctly tie an Ultra Shrimp, two coats of epoxy are used. The first coat penetrates the fibers on the carapace and allows the tyer to form them into the desired shape as the epoxy thickens and cures. Once the forming coat has cured, a second coat is applied. The second coat fills gaps and voids and leaves a slick clean finish on the fly.

The carapace on the DAP Shrimp is formed differently. The DAP adhesive is applied under and over the synthetic fibers and then squeezed and coaxed into the fibers with a toothpick or bodkin. One tip that simplifies this process is to fill a small plastic applicator bottle with DAP and use the bottle's slender spout for precise control as the DAP is applied. Occasionally a second coat of DAP is required to adequately build up the body. Once applied, the DAP adhesive can be shaped and smoothed with a damp brush or small wedge of paper. Flies should be allowed to completely cure (24-48 hours) before they are dunked.

Most tyers are surprised at the durability of DAP once it dries. Although it comes out of the tube white, DAP dries crystal clear. Cured DAP remains slightly flexible but unbelievably tough. It is unaffected by water, mold, and mildew. Flies coated with DAP will not crack when they get slammed on the rocks or discolor if they are left in the sun. DAP can be used as an adhesive, clear coat, or a body building gel. It's good stuff.

Barry ties his DAP Shrimp in a variety of colors, and often uses silver and gold beads to accent the pupils, and gold mylar to accent the belly of the fly. The pattern shown here uses black nail polish as pupils and orange saddle hackles as legs, but I don't think Barry will mind.

This is a great pattern for shallow water redfish and a good pattern for poking around the jetties. A mono or wire weed guard can be added if needed and it will not affect the action of the fly. Good color combos include pink/gold, pink/white, orange/brown, and chartreuse.