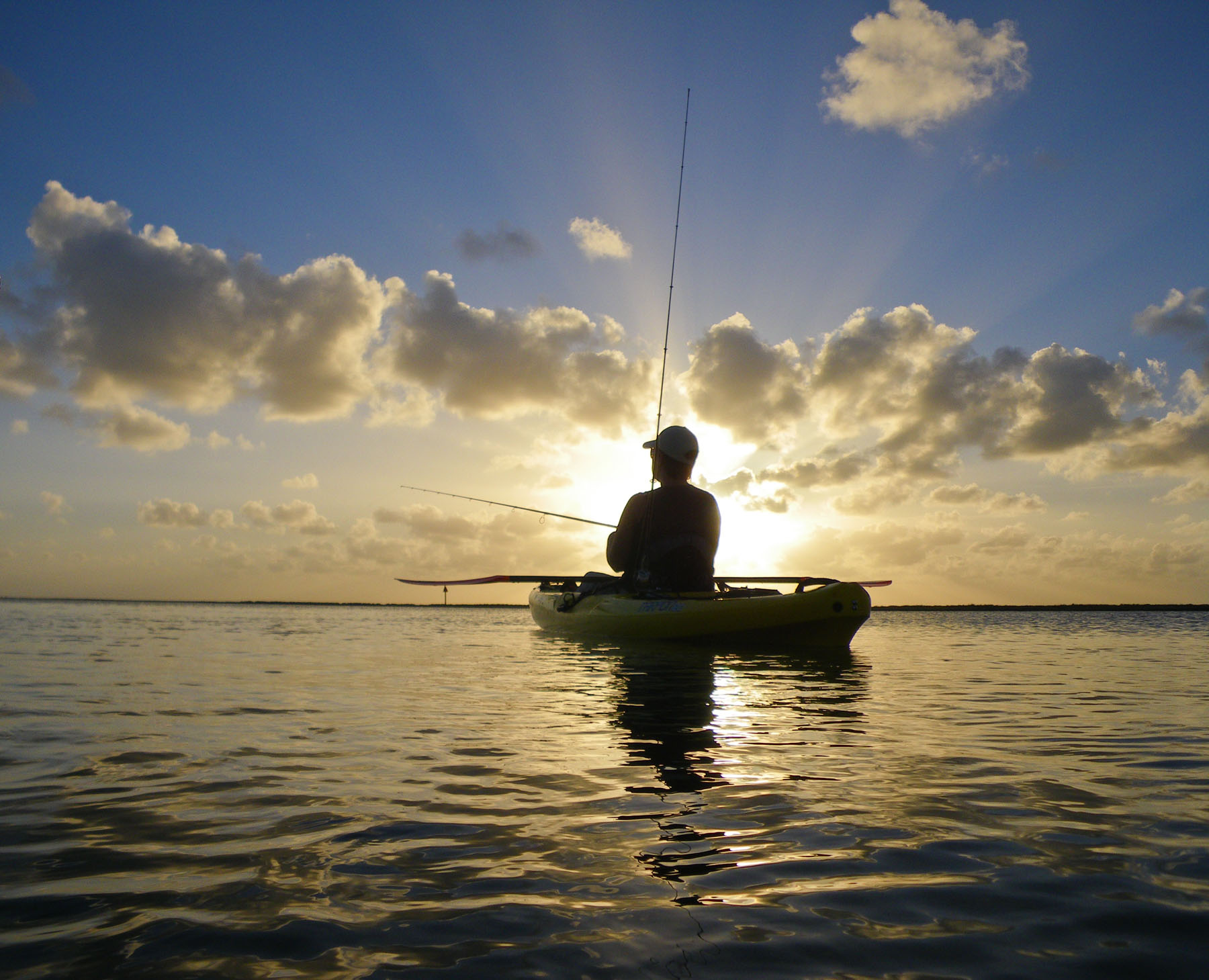 Unexpected sights and sounds make fishing trips memorable; these little guys were too busy with fiddler crabs to worry about us.
I'm often asked by non-kayaking fishing friends why in the world I choose to fish from a kayak. Many of these people have no intentions of ever plopping their rear into a little plastic boat. They just can't understand how someone who owns a perfectly good skiff could put themselves at such disadvantage.

My initial response and one I've used many times over the years has been, "I use a kayak to access areas that are too shallow for boats and too muddy to wade." Anyone who has read my book on kayak fishing or even read these pages with any regularity has seen those words. And while that statement still holds true, some recent events have led me to think about the subject a little deeper. Apparently there are some non-kayakers who have the impression that we who paddle are somehow inferior in status or ability because of the craft we choose to employ. I beg to differ. Some of the best fishermen I know are hardcore kayakers. Many of them could easily afford a $30,000 boat, but choose not to. I personally know of a couple multi-millionaires who fish from nothing more than a modest and simple kayak.

So why do we do it? This past week I was on a nine day road trip along the coast seeing customers. And as is my usual practice I snuck in some fishing, two trips were in a powerboat and three were paddling. I caught fish on every trip; in fact I caught more fish in one day from the boat than I did in all three days of kayak fishing. But once I was back in the office doing the daily grind I found myself reflecting on the kayak catches much more vividly than the others. The situations and conditions were pretty much the same, sight-casting to shallow to redfish. The areas I was fishing are easily accessible to either craft. And I certainly enjoyed myself on all of the trips. So why was I leaning towards the kayak for greater overall enjoyment?

As I reflected on this mystery, (instead of the work that was piling up), I came to realize that there is a common theme in my book of treasured outdoor memories. I can easily recall every deer and other game taken with a bow, not so much those I have simply pulled a trigger to harvest. The days of stalking tailing reds with a fly rod come back to me in great detail and I can almost feel the sense of anticipation as the tail dipped below the surface and a bulging wake surged toward the fly. Drifting a deep water reef and blindly chunking a soft plastic to schoolie trout, not so much. Yet again, the nagging question of why arises. Why would someone who loves being outdoors as much as I do not feel equally about the hours and days spent afield or on the water?

I think that it has to do with our lifestyles. So much is handed to us these days. Hungry? Pull into the nearest drive-thru and order up. Need some obscure information? Google it. Then there's the craziness of being constantly available and connected. Cell phones, e-mail, faxes, instant messaging; it's really no wonder why cutting out as much technology as possible and getting as close to one-on-one with our prey has such an instinctual draw.

Obtaining that perfect shot at an unsuspecting redfish is not something that is handed to you simply because you asked for it. Paddling several miles into an unpressured marsh requires effort. Locating feeding fish requires knowledge of the prey as well as tuning in to your surroundings. Approaching and positioning yourself quietly and correctly requires your undivided attention. Presenting a cast that is close enough to draw a response, yet not so close as to spook him requires skill. Successfully fighting and landing the fish requires patience and experience.

The same goes for hunting with a bow. In order to do these things and have consistent success I have to block out the rest of the world and focus on getting everything right. And therein lies my answer. Sight-casting from a kayak, fly fishing, bow hunting; they all require that I pay complete and total attention to every detail. My gear must be in good condition. I must immerse myself in the surroundings and recognize the cues presented. Basically, when I get in that mode the rest of the world and worries fade into the background and the game at hand comes into crystal clear focus. It seems contradictory that such intensity could lead to ultimate relaxation and enjoyment, but that's what it does for me.

Over the past few years I've noticed a somewhat disturbing trend in our relatively small world of coastal fishing. It seems to crop up most often on the various fishing message boards where anonymity breeds boldness. As the bays have become increasingly crowded there have become established "camps" that are increasingly at odds with each other. I honestly think that it is a vocal minority and not as commonplace as it appears on the surface. A few boaters don't like kayakers. Some kayakers don't like boaters. Guides complain about weekenders and weekenders complain about guides. Everybody complains about potlickers. Even within the boating community some divisions have developed between those with various use-specific craft. Then there are the class divisions based on the angler's chosen method. Fly fishing purists, artificials only, topwaters only, live shrimp, dead bait and then the ever-so dreaded croaker soakers. And I won't even get into the catch/photo/release versus the release in grease argument. I'm growing increasingly weary of, "if you aren't doing it my way, you're wrong."

Personally, I don't care how anyone chooses to fish. They can sling a croaker on an 8wt fly rod while sitting in their kayak tethered to their 32 foot Contender with triple 300's hanging off the stern. So long as they are fishing within the law and legal limits and doing so with respect for their fellow fishermen and the resource, I honestly don't care. And if they are quietly smiling in the office on Monday morning while reflecting on the exploits of the weekend, then more power to 'em.

Attention all paddlers! Come join us October 16th for a day of fun and camaraderie as we celebrate the 10th anniversary of the founding of the Lighthouse Lakes Paddling Trails. The day will begin with a group launch at the LHL park on Highway 361 around 8:30 am. The group will paddle to a designated location for a catered beach lunch scheduled for 11:30. Or if you prefer to paddle on your own you can obtain the coordinates of the lunch and meet the group there. Following lunch and a raffle the group will paddle back to the launch. The round-trip paddling distance is approximately 8 miles.

You can join in on the fun for free, but for $25 you can get a commemorative t-shirt as well as lunch and a shot at some nice raffle prizes. For more information or to sign up, contact Jennifer Thomas of Slowride Guide Service in Aransas Pass at 361-758-0463.