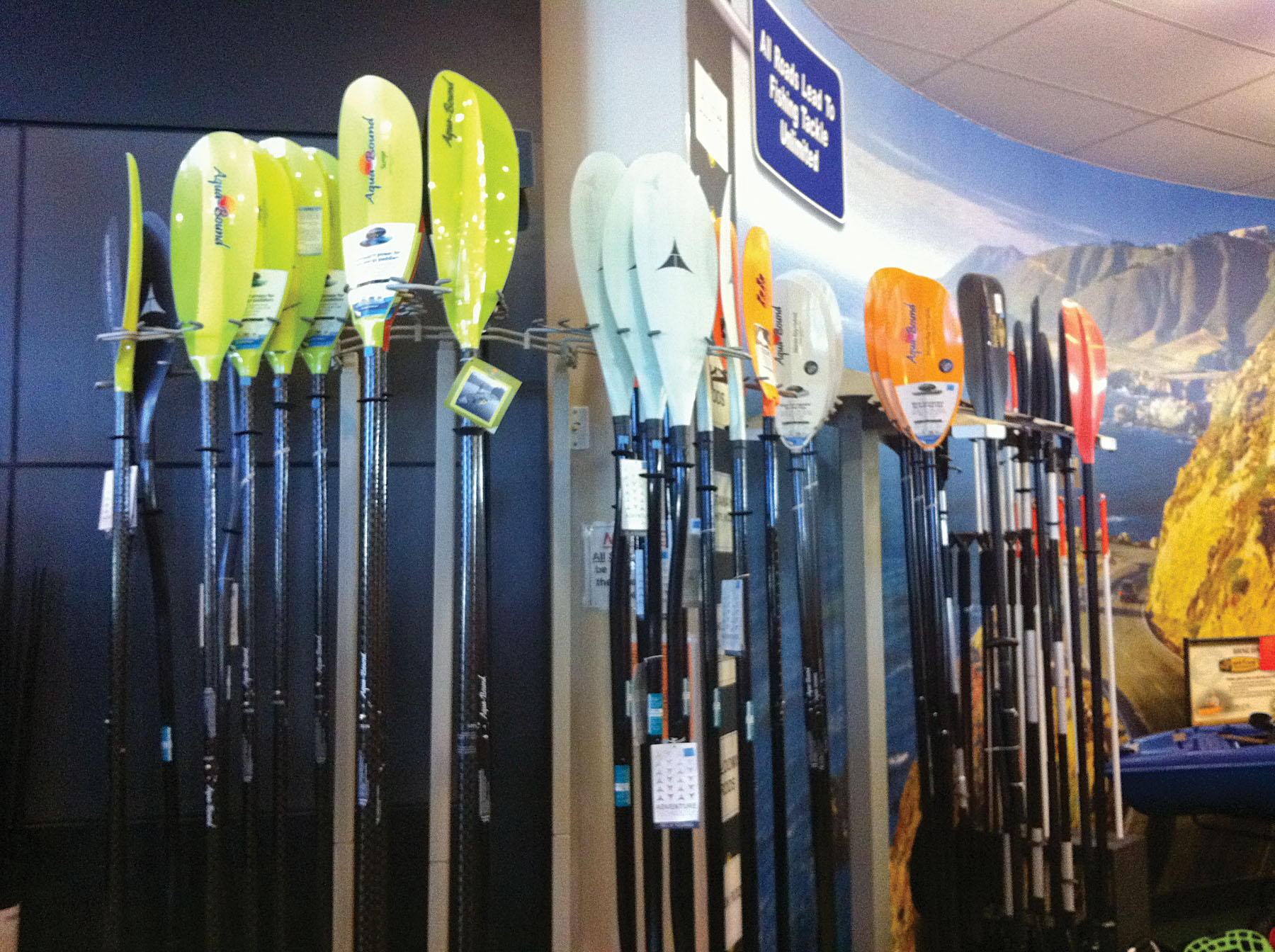 FTU has a good selection of paddles.

Well it's time to close out yet another year. As 2010 came to a close I wrote about what a tough year it had been for the coastal fishing industry. Between a winter that seemed to linger far too long and an oil spill that had everyone on edge, it left me longing for something better in 2011. Looking back on the months of 2011 it's tough to call. I can definitely say 2011 was different.

Late winter brought some anxious times as the temperatures dipped awfully low for an extended period leaving everyone wondering if we were in for a repeat of the killer freezes of the 80s. Luckily, the majority of the coast escaped any major fish kills. Then came the winds of spring that never seemed to leave. Most years you can count on things settling down by Memorial Day. Mother Nature had other plans and she certainly disrupted many of mine. I always love paddling out into the Gulf to chase kings and other pelagic species. To do this I like to have a window of calm for several days to let the waters settle out. There weren't too many of those calm periods this year and none that coincided with a gap in my schedule. Maybe next year.

The freezes, high winds and red tide outbreaks were big news, but the headliner would have to be the record heat and drought that gripped the entire state. The effects on our coastal fisheries were interesting to observe. With no freshwater inflow the salinities crept much higher than normal. As a result, I was seeing dolphin and some rather large sharks deep into the marsh where I've never seen them before. By late summer I was frequenting rivers and bayous miles upstream from where you would normally find salty water and catching plenty of trout, reds and flounder. My wish for 2012 is a mild winter, a spring with adequate rains, flat seas through the summer and finish it up with a fall that lingers into December.

As you receive this final issue of 2011 we'll be sliding headlong into the Holiday Season. If you are like me it seems that every year I have a hard time coming up with gift ideas for those special people on my list. I know of their hobbies and the things they enjoy doing, but I don't always know of the accessories they are missing. I like to nail the perfect gift with an upgrade over their current equipment or perhaps fill a gap in the line-up. I know I'm always thrilled to unwrap a gift that adds to the enjoyment of my time spent on the water or in the woods.

Now imagine the angst presented to the gift buyers targeting something meaningful or useful for you. As outdoorsmen we tend to be gear junkies, it's only natural. I've got a garage full of gear and still can't walk through a sporting goods store without finding something I really need. Okay maybe I don't necessarily NEED it, but I want it. Your gift buyer looks at that assortment of collected gear and figures there couldn't possibly be anything left that you don't already have. The result is yet another tie or bottle of cologne, both of which are totally useless out on the salty flats.

My family members gave up trying to figure it out years ago and now simply ask for a wish list. Given that I'm pretty hard on my equipment and it sees many days afield throughout the year, my list often involves replacing or upgrading things I already have. Years ago it was sometimes difficult to communicate the exact model or piece of equipment I longed for. With the ever-expanding world of the internet, it is now easy to spend a couple hours hunting through the various websites and then saving links to those items you can't live without. I'm certainly not a computer guy, but even I have figured out how to copy and paste those links into an e-mail.

Kayak fishing certainly lends itself to a collection of gear and gadgets. Ideas should be fairly easy to come by, but I'll poke at your brain with a few things to get you thinking. Let's start with some possible upgrades. If you are like me, when you first arrived into this sport you spent a chunk of change on your kayak and then skimped a little on the paddle, PFD and a few other necessities.

Perhaps it is time you look at getting a nicer paddle. It is, after all, your motor. And we could all use a little extra horsepower. My first paddle was a starter job that I thought was perfectly fine. It had an aluminum shaft and plastic blades. I was perfectly happy with it...until I borrowed a super-light carbon fiber model. It was light as a feather and the added stiffness really made a difference in my paddling efficiency. An all-carbon fiber paddle will run upwards of $300, but is worth every penny if you spend a good deal of time on the water. Another slightly less expensive option is a model with a carbon fiber shaft and fiberglass composite blades. They might weigh-in a couple ounces heavier, but are still a far better option that the starter paddles.

For the Hobie pedal-pushers out there, you can get a good deal more efficiency by replacing your fins. Hobie sells a Turbo Fin Kit that will get you to your fishing location ahead of your buddies. The kit is fairly simple to install or you can have a paddle shop handle it for you.

Another area the paddling industry has made great strides is in PFD design. When I started off I just grabbed an old PFD out of the boat and went with it. It wasn't the most comfortable thing in the world, but it made me legal. I have since discovered vests designed specifically for the paddling angler. Several companies such as Stohlquist and MTI now have PFDs with cut-away rear panels that make sitting in your kayak much more comfortable. A paddling vest will also have larger arm openings to keep from rubbing your armpits raw as you paddle. All of this combined will greatly increase the likelihood you'll keep that PFD on throughout the day making you much safer on the water.

Kayak fishing is a wet sport. Whether it is incidental splashing and dripping or an all-out dunking, your gear is susceptible to getting a salt bath. There are plenty of great options out there to help keep your valuable gear safe and dry. I have a variety of soft bags and hard cases that allow me to stow just about anything. Cell phones, wallet and car keys go into a small dry box. My big camera rides in a large Pelican box when I need to get out on the water for some serious photography. A spare set of clothing, first aid supplies and a few other emergency supplies are tucked away in a dry bag that easily stuffs inside the front hatch. You can never have enough options for keeping things dry. Be specific when putting them on your wish list as most paddle shops will have a dizzying array of choices.

Speaking of paddle shops, if you or your gift buyer aren't into the on-line thing you can always visit your local paddle retailer. As you stand before the wall of accessories with pen and paper you will certainly find something there that will make your days on the water easier or more pleasurable. A kayak cart for rolling your yak to the water, a tackle storage system to replace that old milk crate, a set of pontoons for added stability while standing up sightcasting or maybe a new seat to keep you out on the water longer; it's all right there. And perhaps if you've been really good this year you can push the envelope and request one of those brand spankin' new pieces of floating plastic that we all covet.

Be safe out there and have a great Holiday Season!