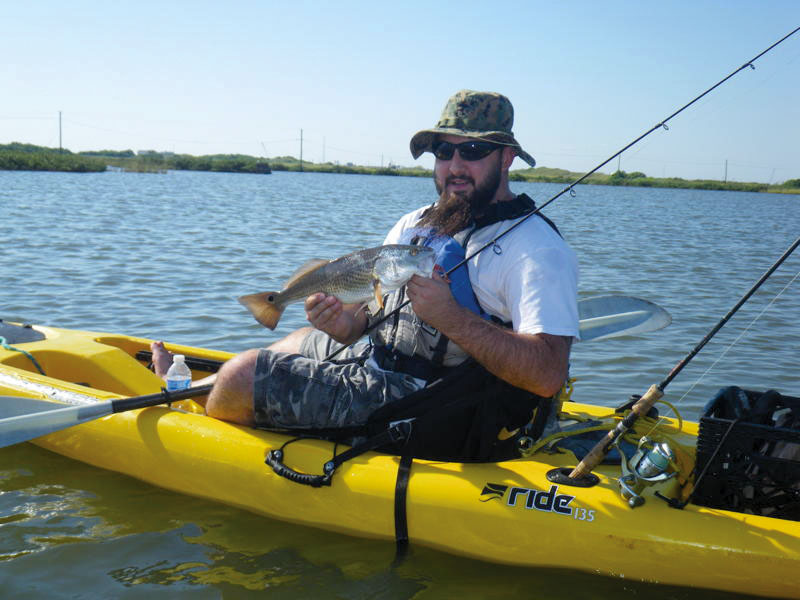 Hard to believe but nearly two years have passed since I first wrote about Heroes on the Water (HOW). The subject came up recently while discussing fall fishing plans with a friend when I mentioned I was joining another group taking wounded soldiers kayak fishing. He said he really enjoyed the Heroes article and inquired how the program was doing. We had a great conversation about how cool it was to help these service members who have sacrificed so much on our behalf. As we parted he said he was looking forward to reading about the upcoming trip.

Somehow it was lodged in my brain that the HOW piece had appeared too recently to justify another but I checked anyway just to make sure. Man, where did all those months go? Not only has a sufficient amount of time passed to revisit the topic, there has been tremendous growth in the HOW program. When the original HOW story appeared here in early '09 the group was just finding its footing and learning to walk, now it is up and running at an incredible pace.

For those not familiar, Heroes on the Water is an arm of the Kayak Anglers Society of America (KASA), a 501c3 non-profit that began in 2007. In the beginning HOW was working with the Brooke Army Medical Center to get recovering soldiers out of the hospital for a relaxing day on the water a diversion from the rigors and stress of rehab. It quickly became apparent that getting these folks out on the water was great therapy. Guys who were missing limbs found freedom in the ease of controlling their own kayak. At one event a soldier was overheard to say, "Out here on the water I'm the same as everybody else."

The program quickly expanded to include soldiers from Darnall Army Medical Center as well as the U.S. Army Wounded Warrior Transition Battalion. The first wave of service members participating in these events were recovering from obvious physical injuries and of course, that is what we were concentrating on. As the program continued it became apparent that kayak fishing was having very positive effects on the less obvious problems resulting from post traumatic stress and closed head injuries. We all know how stress-free we feel while kayak fishing so it really should not have come as any surprise. This resulted in the program opening up to any and all service members recovering from physical or mental issues whether active or retired.

In June of '09 the Texas-based organization went national with three new chapters. In a little over a year that number has grown to nearly thirty chapters across the nation run entirely through donations and volunteers. In a recent conversation with Jim Dolan, HOW national coordinator, he said, "I'm continually amazed how supportive and willing the kayak fishing community has been." And it is not only the fishermen; several companies have gotten behind the organization, most recently Temple Fork Outfitters. They have created a line of rods stamped with the HOW logo and a portion of the sale is donated to HOW.

So as you can see, things have been very busy for Jim and HOW. Growing something like this from scratch to a thriving national organization in such a short time is simply incredible. But without putting butts in kayaks it would all be for naught, so that's what we did last week.

It was a beautiful autumn morning in Aransas Pass following the first cool front of the season. We were preparing kayaks and gear at the launch when Jim pulled up with heroes Robert Richard, Chuck Armstead and Sam Moore. The guys were excited and ready to get underway. After a quick safety briefing the armada set off across the Shrimpboat Channel and entered the maze of mangrove-lined channels and marsh ponds that make up the Lighthouse Lakes. I can't imagine a better place to escape from the world.

Robert and I paired up and started working some cuts. Dean Thomas took Chuck and began drifting the open lakes while Joe Poole grabbed Sam and disappeared. Dean and I had pre-fished the area a couple days prior finding plenty of good reds scattered throughout the area so optimism was running pretty high.

It soon became obvious that the reds simply weren't in a cooperative mood. Robert had several blow-ups on his topwater, but the fish would not commit. Most were simply slapping at the lure a single time and swimming off. No matter how hard I wished for it, Robert couldn't get tight to a fish. I managed to snag a couple decent reds and would have given anything for him to have caught them instead. But he's an old Louisiana fisherman and put forth a serious grind looking for the right fish. I'm not sure how many miles we covered in our pursuit, but suffice to say we never quit searching through a solid five hours during which time I got a chance to get to know a little bit about this young man and learn of the sacrifices he made on my behalf.

Robert signed up for the military while still in high school in Jennings, Louisiana during Operation Desert Storm. By the time he got through basic training the war was winding down and he remained stateside. Over the next few years he continued to train, attended officer school and began Ranger training. He was recalled from Ranger training prior to completion as his unit was shipping out to Iraq. As he put it, "We were pretty heavy into the front of the mess when Fallujah blew up." He went on to say, "My platoon was the most decorated in the area." It was not said boastfully, just with an honest sense of pride. Robert subsequently received a serious closed head injury from an IED after spending two years in Iraq and is still dealing with the effects five years later.

Our group eventually rafted up and hung out for a while exchanging fishing stories. Apparently we weren't the only ones struggling as very few fish had been landed. It was just like hanging out with a group of regular fishing buddies. Every time I participate in one of these events I come away in awe of how these guys maintain such a positive attitude. There is no self-pity, only moving forward.

Jim says it best, "Spend a day on the water with a group of soldiers, and you will understand the passion behind this program. The injured soldiers are literally captains of their own kayaks; moving around on their own at their own pace, experiencing nature up close, and earning bragging rights for their catch for the day. Kayak fishing is therapeutic for anyone, but particularly for military personnel recovering from injuries and trauma. Our mission is to give these heroes a chance to enjoy a challenging outdoor sport that allows them to decompress from the stresses related to combat and from the physical and mental rigors of rehabilitation and join the kayak fishing band of brothers."

If this sounds like something you'd like to experience, Jim is always looking for volunteers. He can be contacted via e-mail at [email protected] If you don't kayak or don't feel comfortable taking someone out on the water he is also looking for event hosts, lodging and places to fish. Some of his best events have been held on private ranches in stocked ponds. Barring any of the above you can still lend a hand by going to www.heroesonthewater.org and hitting the "donate" button. Everyone involved in the organization from Jim on down are non-paid volunteers so every penny donated goes directly to putting on these events.