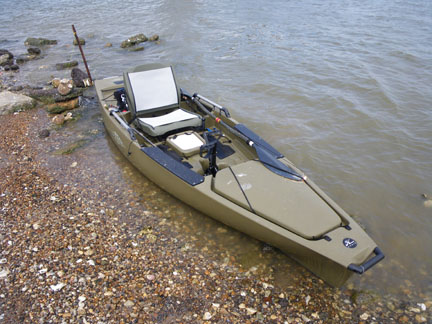 A few months back I wrote an article about the new and updated kayaks being introduced by various manufacturers at the Outdoor Retailer Show. One of the offerings from Hobie was mentioned. I was asked not to go into too much detail as the model on display was a prototype and likely not an accurate depiction of what the final offering would look like. In looking it over at the show it was obvious Hobie was going in a direction not previously explored. This watercraft is part kayak and part small boat. It is difficult to categorize, it's that different.

I went by the Hobie booth while attending the recent BASS Master Classic in Shreveport, La and got a good look at the finished product, the new Hobie Pro Angler. Most every fishing kayak that has come out over the past few years is a variation of the same thing. Yes, there are different lengths, widths, hull designs and cockpit areas; but they are basically based on the same general platform. Hobie has broken all the rules with the Pro Angler and come up with a boat many anglers will find appealing.

I finally got my hands on one a couple weeks ago and took her out for a morning of fishing. I figured if I was going to test it out and report to you guys, I'd better put it through the paces of actual fishing use. That, and I just wanted to go fishing.

The amount of storage and the clever ways in which the storage has been integrated into the design is pretty cool. If you're a tackle junkie who likes to bring it all with you, you'll love this rig. The front hatch is huge and comes with a plastic liner. I chose to use it as a cooler. I dumped a twenty pound bag of ice in there, half a dozen drinks along with lunch and still could've easily put a limit of reds in there as well. The liner is removable and with it taken out you could store enough gear for a camping trip. The bow hatch is hinged at the front and allows easy access to this storage area as well as the ability to load bulky item.

On the floor of the cockpit is tackle storage area that holds three Plano boxes in addition to a partitioned space for pliers and other tools. The hatch cover has a small cutting board mounted to it for those guys who want to rig bait. The plastic liner inside this hatch is also removable allowing access to the inner hull. On either side of the seat is a molded area set up to hold larger tackle boxes. And then there's a larger than normal tankwell behind the seat listed as having more than five square feet of storage. I didn't try it, but I think you could put a 48 quart cooler back there with room to spare.

Want to bring spare rods? Hobie has you covered there too. There are two standard flush mount rod holders behind the seat. Nothing new about that, but the horizontal rod storage along the gunnels is something no other kayak company has done. It is the same idea used in small poling skiffs. There is room for three rods on either side of the cockpit with the tips of the rods protected by rod tubes that go through the front wall of the cockpit and into the bow storage area. The rods fit snugly against the gunnels with the reels sitting on a raised platform beside the seat. It was pretty cool to be able to put my fully rigged 9' fly rod in there to keep it out of the way while casting my conventional gear. They've also provided accessory mounting boards along the top of both gunnels just forward of the seat for additional rod holders, a GPS or a fish finder. And don't worry too much about overloading this boat as it is rated for 600 lbs of capacity. Like I said, this boat is a tackle junkie's dream.

Performance wise you aren't going to win any races, but this boat wasn't designed for speed. The Pro Angler comes with Hobie's pedal Mirage Drive that propels the boat at a decent pace. I pedaled into and across a stiff breeze with a pretty good chop on the water and found it to be a very dry ride. I was satisfied that this rig could handle much rougher conditions with ease. The rudder system is another point where Hobie went outside the box. Instead of mounting the rudder off the stern they chose to move it forward underneath the tankwell area. It didn't seem like much, but resulted in a much tighter turning radius than other ruddered kayaks I've paddled. And, they set it up in such a way that the rudder folds neatly into a pocket within the hull where it is out of the way when entering shallow water. I was also able to paddle the boat effectively when the water was too shallow for the Mirage Drive. Due to the extreme width of the hull, I'd suggest getting a longer than normal paddle or possibly a single blade canoe paddle if you intend to do more paddling than pedaling.

The hull shape and width lends itself to exceptional stability and it would take a serious incident to flip this boat. Once I got over to the marsh I figured I'd test that stability by standing and poling through the shallows. I've stood for sight-fishing in a lot of different kayaks and never felt more stable than I did in the Pro Angler. Poling through the marsh was a breeze with absolutely no worry of tipping. The large floorboard made it easy to move around and cast in different directions. I wish the fish would've cooperated, but overall it was good day to be on the water and the new boat was a pleasure to use.

As I've said many times before when choosing a kayak, every boat is a compromise. In the case of the Pro Angler all of that storage, stability and weight capacity results in a rather large boat when compared to the kayaks we're used to fishing from. The overall length is listed at 13'8" and 38" wide. The base hull weighs in at 88 lbs and jumps to 138 lbs fully rigged. Yes it's wide and heavy, but the multitude of unique fishing-specific features outweigh the inconvenience of unloading and launching. If you're looking for a rig with higher weight capacity that handles rough water and is super stable, you'll want to give this boat some serious consideration.