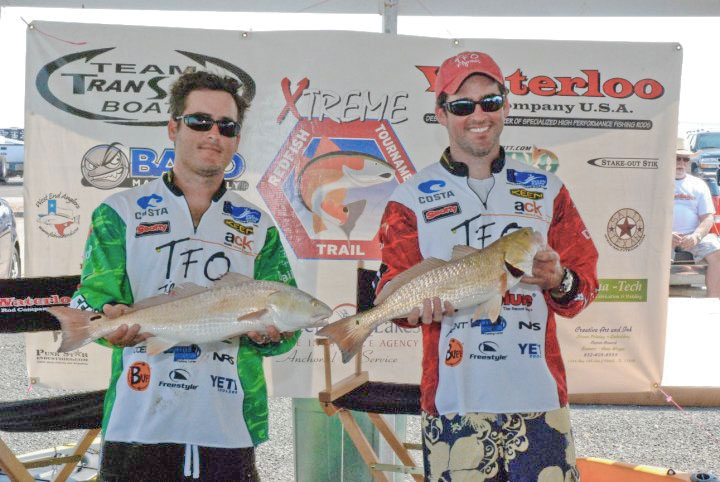 Clint and Cameron Barghi with a nice pair of tournament reds.

Why do you fish? Non-fishing friends and acquaintances have asked this more times than I can remember. My response has varied over the years growing from a kid working at Marburger's, plumb eat-up with fishing, to a young man looking to prove myself to peers, and now as a guy trying to make a living from it.

Through it all a common theme has emerged; I love the challenge of putting the pieces together to outwit a fish with a pea-sized brain. Wind, tide, moon phase, temperature and a myriad of other factors need to be considered when searching for the pattern that will pay off on any given day. Then once you find the fish you still have to figure out how to make them eat the forage forgeries in your tackle box.

Thankfully, the years of experience have led me to a point where most of the above has become instinctual. I love that I grew up in a time when we didn't have all of this information at our fingertips. We had a tide chart and the NOAA weather radio. Many trips were diverted to alternate locations based on pre-dawn flags along the Gulf Freeway that disagreed with the monotone NOAA weatherman and we pretty much flew by the seat of our pants. Looking back I wouldn't trade the experience and knowledge gained for all the weather and tide sites I have saved in my "favorites" file. We were going fishing. And short of a storm with a name; the truck didn't turn around very often. I'm certainly not saying we caught fish no matter the conditions, but it happened often enough to teach us that we could be successful even when conditions were not in our favor.

Now days, I cannot imagine being a newbie attempting to put it all together. I'm afraid I would suffer from information overload paralysis. With the click of a mouse I can know precisely what the tide is doing at any number of locations and I can also access weather forecasts that would turn any meteorologist of the 70s and 80s green with envy. Combining that with conflicting fishing reports on the internet and the flood of "must-have" lure advertisements could lead one to believe that catching a fish is almost too complicated to accomplish.

It isn't. The simple truth is that fish have to eat to survive. They eat whether or not the wind is blowing. They eat on high tides and low tides. They don't care if it's raining. And they don't read advertisements. My apologies to all the great advertisers in this magazine, but it simply isn't that complicated.

The strong wind pattern this spring has kept many anglers on the couch, but those of us who went anyway have been catching some damn fine fish. Just go fishing. I'm not saying to go in dangerous conditions, but don't let a less than ideal forecast keep you at home. Fishing in adverse conditions can make you a better angler if you'll approach it with a positive attitude and pay attention to what the fish are teaching you. Experiment with different lures, try a variety of locations, fish deep, fish shallow, fish slow, fish fast...just know that they're eating something somewhere.

That's how I grew up. My grandmother used to say I'd drop a line in the toilet if I thought I might catch a fish. Apparently she wasn't far off. A buddy and I once fished a wastewater outfall in Florida because we heard monster tarpon hung out there. We didn't catch one, but we saw plenty. It will forever be known as The Poopy Plant Expedition. Yes, I fished some pretty unlikely places over the years. Some paid off and some were a total bust, but I had fun trying no matter the outcome.

For a while I fell into the trap of waiting on the right conditions. I had a young family and fishing was not always top priority. Too often I found myself avoiding the water if things weren't perfect as I didn't want to waste a precious kitchen pass on a water-haul. As the family grew up I found more time to fish, yet still found myself sitting at the house if the wind was blowing too hard or from the wrong direction.

I snapped out of it when I got into tournament fishing. Tournament dates don't always fall on perfect weather. In fact, it seems the weatherman likes to throw a nasty slider at tournament directors. Successful tournament anglers buckle down and go. And they catch fish. Yes there are always a few zeroes posted, but the majority bring something to the weigh-in. And the top tier is usually pretty impressive no matter the conditions. Regardless of the wind, tide, temperature or location I've never seen a tournament with skunks across the board. Fish gotta eat.

Competitive fishing forced me out of my comfort zone. The challenges varied from unfamiliar water to adverse weather. Pride wouldn't let me mail it in and I came back around to fishing as I had in my younger years, thinking on the fly and putting pieces together for a successful day.

Think of it as the difference between putting a kid's puzzle together versus a complicated jigsaw. Of all the tournaments I fished, two stand out in my mind as the most satisfying. The first was in the foreign waters of Tampa Bay. The wind was dead calm, it was hot and the tide was dead low with no movement. I spent the early morning paddling a beautiful grass flat void of life. I ended up taking a break on an exposed sandbar. As I wandered around stretching my legs I saw several good-sized snook laid up in a sandy pothole just off the bar. I threw everything I had, even danced a DOA shrimp right on the lip of a thirty-incher and got no response.

As I sat on the sand staring at that fish I noticed the turtle grass start waving and then lay over with the incoming tide. The snook vanished. I immediately recalled the advice of a local that claimed their fish won't feed unless the tide is moving. In my earlier wandering, I had discovered a deep break in the sandbar about a hundred yards from where I was sitting. I beat feet to the cut and proceeded to have a ball catching some nice reds and trout as the current swept through. When the water crested above the sandbar the flow through the cut slowed and the action died. I headed for a creek opening on the shoreline that led to a labyrinth of mangrove lakes. The creek was deep with an oyster reef that would be the perfect ambush point on the incoming tide. First cast alongside the reef yielded a nice snook to round out my tournament slam and take first place over eighty-five locals. While I enjoyed the win, I was even more satisfied to have solved the puzzle.

The second was a cold, misty and generally miserable December morning on Galveston Bay. Even though it was cold it had been unusually warm in the preceding week. The cold had arrived on a slow moving front instead of barreling in and blowing all of the water out of the marsh. I had been catching some good reds way back in the marsh and figured the weak front hadn't pushed them out. Before the sun cleared the horizon I had a huge red in my sights busting bait on a back lake shoreline. After catching him I went on to catch a half dozen more as I headed to a deep bayou exiting the lake to try for a trout and flounder to round out my string. The tide was just starting to fall and I knew the trout would be feeding at the drain, but being December, most of the heavier flounder were probably already in the Gulf. I decided to start deep. Bumping bottom with the first cast drew a solid thump. Flounder! Two species down, one to go. The next couple hours was some of the best marsh trout fishing I have ever experienced. Winning the tournament was cool, but having a banner day when I probably would not have fished otherwise was the real prize.

Neither of those situations were overly complicated. The water started moving and the fish started eating in the places they should have been. All I did was recognize what was happening and put myself there.

I no longer fish tournaments but I still use things I learned in those competitions every day I'm on the water. I also do not hesitate to venture into less than ideal conditions knowing that somewhere the fish are feeding, all I have to do is put the puzzle together.

If you would like to try your hand at competing against the weatherman and your fellow anglers there are several tournaments available to kayak fishermen. The Xtreme Redfish Trail Kayak Series and IFA Kayak Fishing Tour each have multiple events along the Texas coast. Both tours lead to a championship at the end of the season with cash and prizes for the winners.

If you don't feel that you're ready for the big league, the Casting for a Cause tournament will be held June 24 at Bluff's Landing. They have divisions for boaters and kayakers and last year raised over $40,000 for charity. This year all the proceeds will go to National Multiple Sclerosis Society and Heroes on the Water.

The Rockport Yak Attack Tournament based out of Seaworthy Marine in Fulton is in its third year benefiting Camp Aranzazu, a camping retreat for children with chronic illness. The event date isn't set in stone, but they are looking at the first weekend in October. For more information on these tournaments you can go to www.texaskayakfisherman.com.