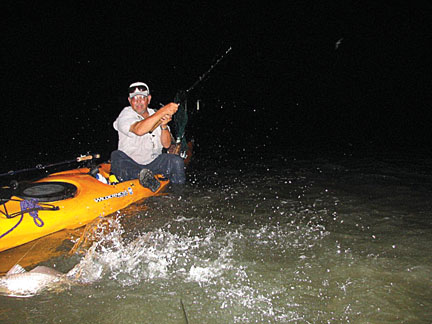 When the going gets hot, the hot go nocturnal. It seems that we went straight from non-stop wind to dead-still oven-like conditions without much in between. When you're the motor on your boat the odds of overheating the engine greatly increase throughout the summer season. The best way to beat the heat is to get out there when the sun isn't shining.

I began night fishing to beat the heat way back in my high school days. It is always a bit nerve-racking to wade through the blackest nights wondering what creature was out there. Every splash seems to be magnified in the dark and a feeding redfish sounds much more like a big ol' gator looking for an easy meal. I think we tend to rely so heavily on our sight that we miss many of the other signs of feeding fish during the daylight. While night fishing you'll quickly find that your ears will often lead you to the best bite.

Nowadays I prefer to paddle into the dark and keep myself within the relatively safe confines of my little plastic boat. Not that anything has ever "gotten me" while night-wading, but I think keeping my feet off the bottom negates at least a few of the hazards. I'm also a lot more cautious about where I go and how I prepare for such a trip. The dark of night tends to amplify even the most minor of mishaps and getting help can be much more complicated should things go south.

And while there are certain dangers inherent to night fishing, the rewards can be great. We aren't the only ones affected by the heat; the fish don't seem to dig it either. I was in a back lake recently and found the water uncomfortably warm. When the water becomes heated to this level, the dissolved oxygen potential plummets and, fish can become lethargic and reluctant to feed. Trout simply won't tolerate it and will migrate to more acceptable environs. Take that same lake after several hours of cooling during the night and you'll have a completely different scenario.

We all know that the shallow-water fishing in summer is often best during the first hour or two of daylight so we rush to be there just as the sun comes up. But in reality that is often just the tail end of the feeding that started during the night. Doesn't it make a lot more sense to forego a few hours of sleep to get out there at the start of that feeding frenzy and be off the water before the sun starts broiling?

There are two good ways to get in on this action. One of the most popular is to hit the subdivision canals to take advantage of the lights placed near the piers and docks. As long as you're courteous and don't horn in on the property owners while they're fishing their lights it's a good plan. Being in a kayak allows you to ease into position and fire a few casts into the light. I've found that many times there are one or two decent fish on a light along with a bunch of runts and after the commotion of a couple fish fights the action tends to slow. If you're stuck standing on the pier you often have to wait a while for things to settle back down, but with the kayak it's easy to move on to the next target. I've had some banner nights slowly working my way through a subdivision picking off one or two fish at each new light. After many years of experimenting with lures in the lights I've narrowed my selection to just a handful. Most are very small soft plastics rigged weightless. I like clear and silver minnow imitators and the DOA shrimp. You should try to match whatever bait you see cruising the lighted zone.

The other method, and my personal favorite, is to go out to one of your normally productive areas and fish much as you would during the daylight. Pick a place that you know really well and are very comfortable with as things tend to look a lot different out there in the dark. Beyond being a productive area, my main criteria for choosing a particular location are a lack of possible boat traffic, protected water, and a lack of strong currents. Basically I'm looking for a nice flat along a shoreline, a cove or a back lake. Stay away from big passes or areas with deep drop-offs.

As for lures, I tend to lean on topwaters. While I've caught plenty of fish on subsurface lures, there is something exhilarating about a topwater getting hammered somewhere out there in the dark. I hear often that only black or dark-colored lures will work at night. I tend to think that's more tradition than hard fact. The general thought is that a black lure produces a more defined silhouette, but my thinking is that the baitfish aren't black and predators don't seem to be having difficulty locating them. There's also a popular notion that a full moon makes for better night fishing. I personally haven't found that to be the case, but it probably wouldn't hurt to schedule your first foray under a full moon to take advantage of the added illumination. It'll make it easier to get around and give you a greater sense of security. Also, an all-night trip might sound cool, but the reality is that it's a tough grind. After a really hot day the water doesn't cool off sufficiently for several hours, thus the bite might not start for a while. Plugging dead water in the dark can get old pretty quick. I prefer to get started a few hours before daylight and then stay through the prime early morning.

As usual, safety is the highest priority. I always wear a PFD when night fishing, there are simply too many uncontrollable factors involved. I also keep a whistle secured to the vest and have a handheld spotlight within reach, both to signal any approaching boats that might not see me and to signal for help if necessary. You are also required by law to have a 360-degree visible white light. Put fresh batteries in your light and carry some spares if you plan to be out there all night. One last thing, bring a buddy. Not only is it safer, you'll have somebody to take your picture when you nail that big sow trout.