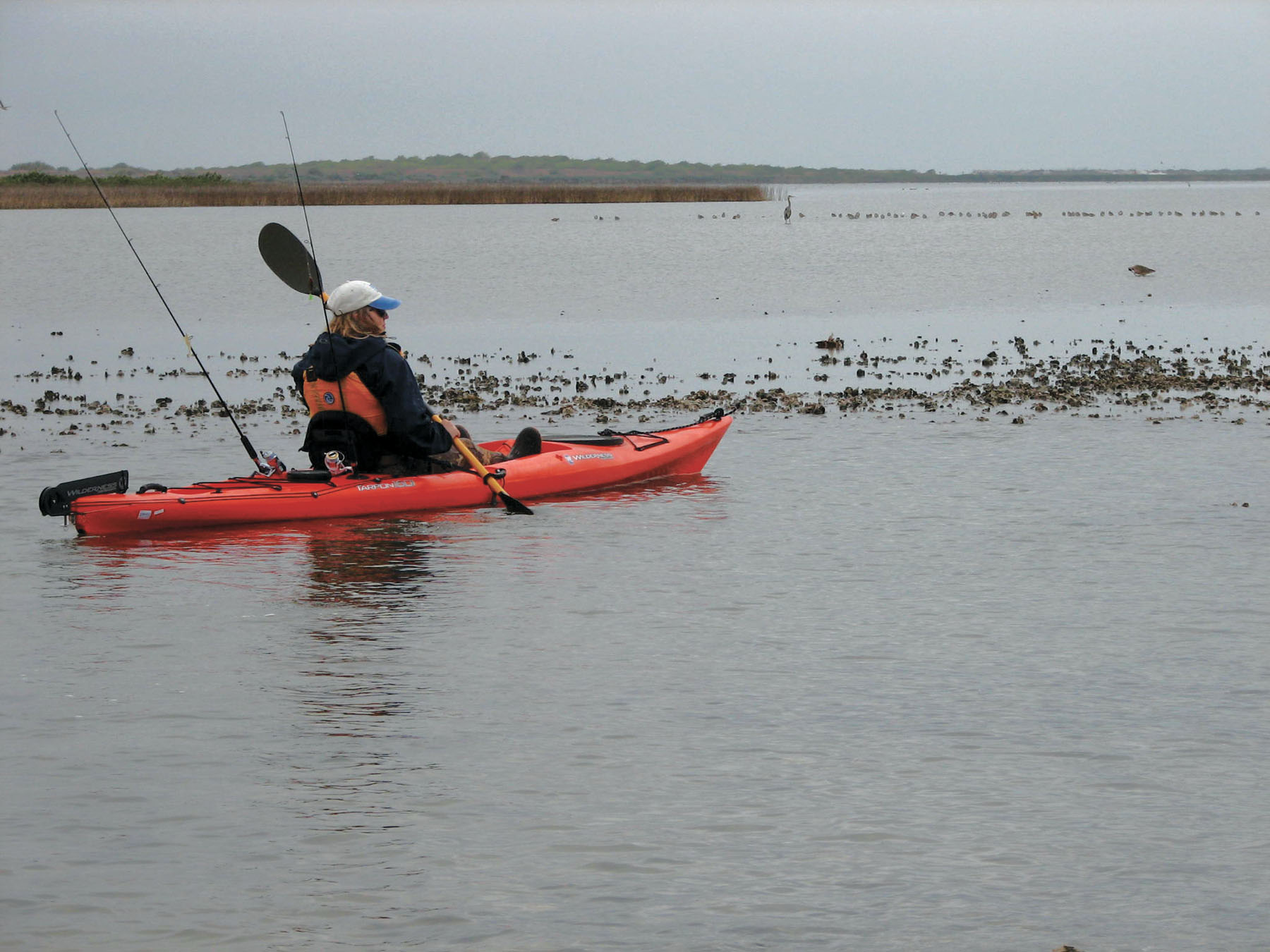 Photo by Dean Thomas.
Are you ready to test your kayak fishing skills against your fellow kayakers? How about just getting out and meeting a few other kayakers in a fun environment of competition? Or maybe test your abilities to locate and catch some fish on unfamiliar waters? There are nearly as many reasons to enter a tournament as there are fishermen. Nobody will be getting rich and famous at these venues, but there are some pretty nice prizes being offered and you can't get lucky if you don't give it a shot.

Several kayak tournaments and series have come and gone in the past few years and I've sampled most all of them at one time or another. And I think they've made me a better and more well-rounded fisherman. It is very easy to fall into a rut of fishing within your comfort zone. You pick the place, you go when the conditions are most favorable, and you target your favorite species. There is certainly nothing wrong with that, but perfect conditions don't always line up with available fishing days. Tournament fishing will often force you out of that comfort zone. You'll have to fish whatever conditions you wake up to on tournament morning. High winds, rain, and slack tides are just a few of the adverse situations you'll likely encounter. Forcing yourself out in these conditions and finding that you can catch fish even in the worst circumstances is great for your fishing confidence.

Formats that call for different species will also stretch your abilities. Perhaps you are a trout fishing guru, but the tournament calls for a slam of a trout, a red, and a flounder. You'll have to figure out those other two species if you hope to compete. I know that when I started fishing these contests I was very weak on flounder. I caught incidental flounder and I caught plenty during the fall run, but targeting big flounder in typical bay conditions wasn't something I was comfortable with. Over time I figured it out and managed to win a few slam tournaments. Nowadays if I want a couple flounder for dinner I can confidently go out and target them. And if it weren't for the Florida tournaments I doubt I'd have ever gotten so hooked on snook fishing. In short, the tournaments made me a more diverse fisherman.

My first trips to fish the Florida tournaments were preceded by lure-buying frenzies that put a serious dent in my fishing budget. But once I got over there I found that my old stand-bys worked perfectly fine. However, there have been other trips where I tried to force my favorite lures onto the local fish and got skunked. I've also picked up new techniques from locals that I've taken back home to Galveston. The DOA shrimp is a perfect example. After being forced to use them on the clear flats of Aransas Pass, I decided to give them a shot in our off-color marshes on the upper coast. Now you won't ever find me without a clear/gold flake DOA in my tackle box. Again, the tournaments led me to be a more diverse angler with additional confidence lures at my disposal.

And of course there is the biggest variable of alllocation. I know plenty of great fishermen up and down our coast that can go out and score big on their home waters under just about any conditions. But take that same guy and move him 100 miles north or south and he is like a fish out of water. To be a successful tournament fisherman means being able to adapt to the location the event is held. To me, learning new water is fun. Being successful on unfamiliar waters is very rewarding and not nearly as hard as you might think. It is a matter of either applying tactics you already know from your home waters or being open to trying new methods employed by the locals. I've done it both ways with varying levels of success. My suggestion is to be open to new techniques and lures, but don't be afraid to try what you are most confident with. A little experimentation will usually lead you to figuring out the combination and unlocking the secrets of most any area and species. Just remember the basics. They're all predators and eat pretty much the same things no matter where you are. Imitate a minnow, mullet, or shrimp and you can pretty much count on catching something.

Now that I've got you thinking about the reasons to dip your toe into kayak tournament fishing, you need to know where to go to get involved, right? Several good tournaments have recently announced their scheduled dates for 2008. There seems to be enough variety among the formats to provide everyone an opportunity to participate.

Simrod Outdoors, creators of several popular Texas-based tournament series are set to start their second year of kayak tournaments. The Texas Kayak Series consisted of two events last year. The events were successful enough that they've expanded to three tournaments this year. April 6th in Rockport, May 4th in Matagorda, and July 20th in Rockport. You may have noticed that those dates are on Sundays. The reasoning behind this is two-fold. First, it provides anglers with a chance to pre-fish the area on Saturday without having to burn a day from work. And second, it is easier on the directors as the kayak tournaments are piggy-backed onto their popular Texas Redfish Series tournaments that are being held at the same locations a day earlier. These tournaments are set up as artificial only with the single largest redfish getting the top prize. It is a live weigh-in with a half pound penalty for a dead fish. Despite some initial concerns, last year's tournaments proved that it was possible to hold a live weigh-in redfish tournament in kayaks. A wide variety of live wells and contraptions were employed and pretty much all of them worked out. There is also a side pot for two-man teams to weigh their two largest fish. In addition to prizes being awarded at each event, there will be a points system to determine the individual angler of the year as well as the team of the year based on performance at all three venues. I attended a couple of their tournaments last year and came away very impressed with the way in which the directors ran the events. Another cool point to mention is that all of the Simrod Outdoors events are featured on the Texas Saltwater Series television show that airs on Fox Sports Southwest. For additional information go to www.kayakseries.com or www.saltwaterseries.com.

A new tournament series on the scene this year is the Third Coast Kayak Fishing Series. Jerry and Debi Book of Jerry B's Kayak Shop in Corpus Christi have developed a five tourney series along the middle and lower coast that will be breaking into some new areas for kayak tournaments. I can't recall any major kayak tournaments being held out of Kingsville or Port Isabel. Those two venues should make things interesting for anyone vying for their angler of the year honors. The tournament schedule is February 23rd in Corpus Christi, April 19th in Port Isabel, June 21st in Port O'Connor, September 6th in Kingsville, and October 25th in Aransas Pass. The tournaments follow a catch, photo, and release format with individual awards for the longest trout, red, and combination of the two. Anglers can also form four-man teams with a separate set of awards and points going towards team of the year honors. Anglers can enter a single tournament or all five, but in order to be eligible for the year-end awards you must compete in at least four of the events. For additional information go to www.thirdcoastkayakfishingseries.com or give Debi a call at 361-244-2161.

Galveston area kayakers have the 4th Annual Arabia Shrine Sportsmen Tournament on June 14th at Boyd's One Stop on the Texas City dike. There are separate boater and kayaker divisions available with teams of up to four anglers. Prizes will be awarded to the best five trout stringer, three redfish stringer, and individual largest trout or redfish. A side pot for the largest flounder is also available. I haven't had the opportunity to fish this one in the past, but I've heard from friends that it is a very well run event and of course it benefits a very worthy cause. Additional information can be found at www.shriners-houston.org/sportsmentournament.html. You can also contact Rudy at 281-356-6797 or Sherman at 713-805-6114.

For those who want to try something completely different there's a tournament across the border in Cajun country put on by the Bayou Coast Kayak Fishing Club called Paddle Palooza V. I haven't attended any of their past tournaments, but I am familiar enough with south Louisiana hospitality to bet that anyone attending will have a great time. This one is set for March 15th in Leeville with a weigh-in at Boudreaux's Motel. There are numerous categories for everything from largest trout to a trash slam of drum, sheepshead, and white trout. Check out www.bckfc.org for a full schedule of entertainment surrounding the event. I think I'm going to try and clear a spot on my calendar for this one.

Whether you choose to participate as a contestant in any of these events or not, I hope you'll at least come by and hang out for a while. It's always great to meet fellow kayakers and the weigh-ins are open to everyone.