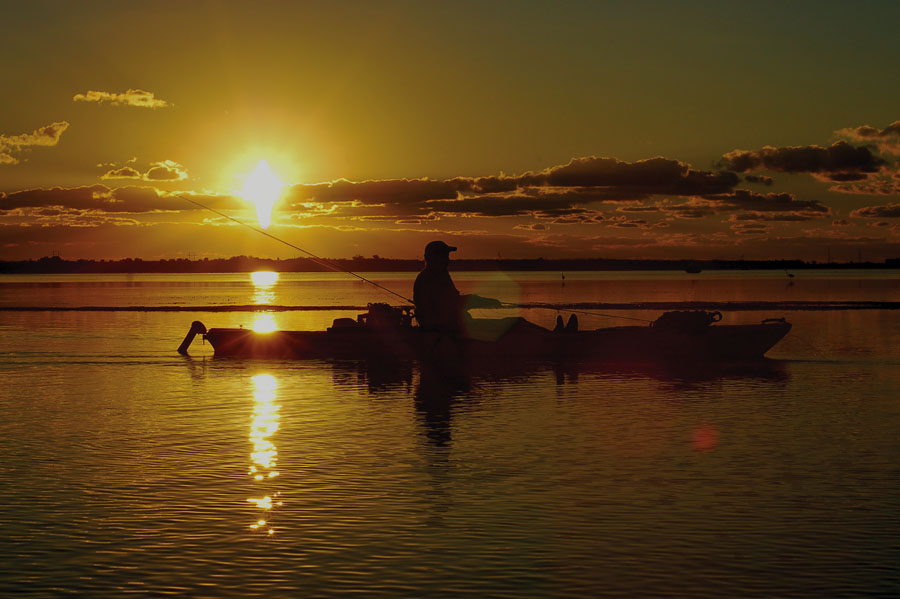 At first glance, modern sit-on-top kayaks seem to be a perfect match for fishermen. They are terrific watercraft for shallow flats, backwater marshes, and remote stretches of water. And few other boats, whether motored or poled, can match the stealthy efficient nature of the kayak. You can silently slip right up to the fish when you're in one. When you add the fact kayaks don't leave prop scars on the bottom or disrupt the neighborhood with noisy smoking engines, they seem like a slam dunk. And in many respects they are.

But, just because kayaks do all these things well does not mean kayak fishing is easy. Kayaks will test you. They'll tax your endurance and your decision making. When you are in a kayak, you alone are in charge of the outcome. At first, this is a little disconcerting, but it soon becomes liberating. It's a great feeling. Having spent many years paddling and fishing from kayaks, I have made some good choices and a few I would like to have over again. Here are a few lessons that have stuck with me.

I remember the very first time I launched a kayak. I was excited, a little nervous, and frankly very curious how the whole thing would turn out. Once I got on the water I was amazed at how quickly I covered ground. It was almost effortless. Distant objects seemed easy to reach and the boat just zipped right along...piece of cake. Eventually, I swung the bow of the boat around and on the return trip I got a dose of kayak reality: Wind at your back is good. Wind in your face is bad. I made it back to the truck in one piece, but was keenly aware of how much strength and energy was required to paddle a loaded kayak into wind and choppy water. It was an important factor in the way I planned future trips.

Be Seen and Be Smart

As the number of kayaks and power boats grows on the Texas Coast, near-misses between them have become more frequent. Unfortunately, close calls between power boats and kayaks often result in finger pointing and name calling from operators of both vessels. Power boaters argue that kayaks are hard to see and they paddle through busy boating lanes. Kayakers point out that power boats are at times operated carelessly and at unsafe speeds. There is some truth to both sides, but one thing is certain- in a collision between a power boat and a kayak, the dude in the kayak is going to lose.

I might catch some heat for saying this but I believe it is true: You are ultimately responsible for your own well-being. Busy boat lanes and boat ramps are treacherous places for kayakers to be, especially on Saturday afternoons. Avoid them. You might have every "right" to paddle through a particular area, but that does not mean it's a good idea. Entitlement has nothing to do with common sense, and as our waterways become increasingly congested, the issue will worsen. Yes it's inconvenient, and we wish it was different, but that's the way it is. Be smart on the water.

Within the kayaking arena, there is often a discussion of "wet boats" vs. "dry boats." Boats touted as "dry" usually have raised floors, sleek hulls, or crafty scupper systems that combine to keep water out of the cockpit and off the butt of the angler onboard. And while it's true some boats are certainly dryer than others, the reality is kayaking is a wet activity. A little splash here, a slosh or two thereyou are going to get wet, and your stuff is going to get wet. Plan on it. Cell phones, cameras, wallets, and other valuables should be packed in a dry box if you value them.

If you fish in cold weather, you'll definitely want waders to keep warm and dry. My personal preference for kayaking is a pair of neoprene waders rather than loose fitting "breathables." The reason I prefer neoprene is because they are insulated, buoyant, and their snug fit offers protection against catastrophic water penetration should the kayak roll in deep water. I am no authority on the matter, but I shutter at the thought of trying to crawl into an overturned kayak while wearing swamped/bellowed waders.

Casting a Fly Rod is Tough!

There are basically three ways to cast a fly rod from a kayak. You can sit with your feet forward and make a cast more or less over the bow. You can sit side-saddle and make a cast off the side of the boat. Or, you can stand up and cast. Unless you own an incredibly stable boat and are fishing in glassy conditions, forget about the standing up deal. It looks great in advertisements but is exceedingly difficult to execute. That leaves two "seated" options.

My preference is to sit side-saddle. There are two reasons for this. First, in shallow water you can use your feet to crab-walk and keep the boat in a good position related to the target. Second, the side-saddle orientation makes all that loose fly line between casts easier to handle. You just let it slide over the side of the boat. I find this much easier than trying to strip it into floor of the boat. It seems like it always ends up getting tangled there.

Both positions will require you to maintain a high backcast. This is because when you are seated in a kayak it is as though you are wading waist-deep. The rod tip is close to the surface of the water and backcasts tend to slap the water unless they are kept high. Most anglers find they need considerable practice to make accurate consistent casts while sitting in a kayak. It can be tough.

A fourth option is to slip the anchor over the side of the boat and hop out. This is probably the most simple and comfortable of all, assuming the depth and bottom is suitable for wading.

If you are considering a kayak for fly fishing remember there is no such thing as a perfect boat. All vessels have strong and weak points, and each requires anglers to adapt and accept the good with the not-so-good. Kayaks are no different. They'll make you work and make you think. They'll also boost your self-confidence and give you a sense of freedom you won't find elsewhere.