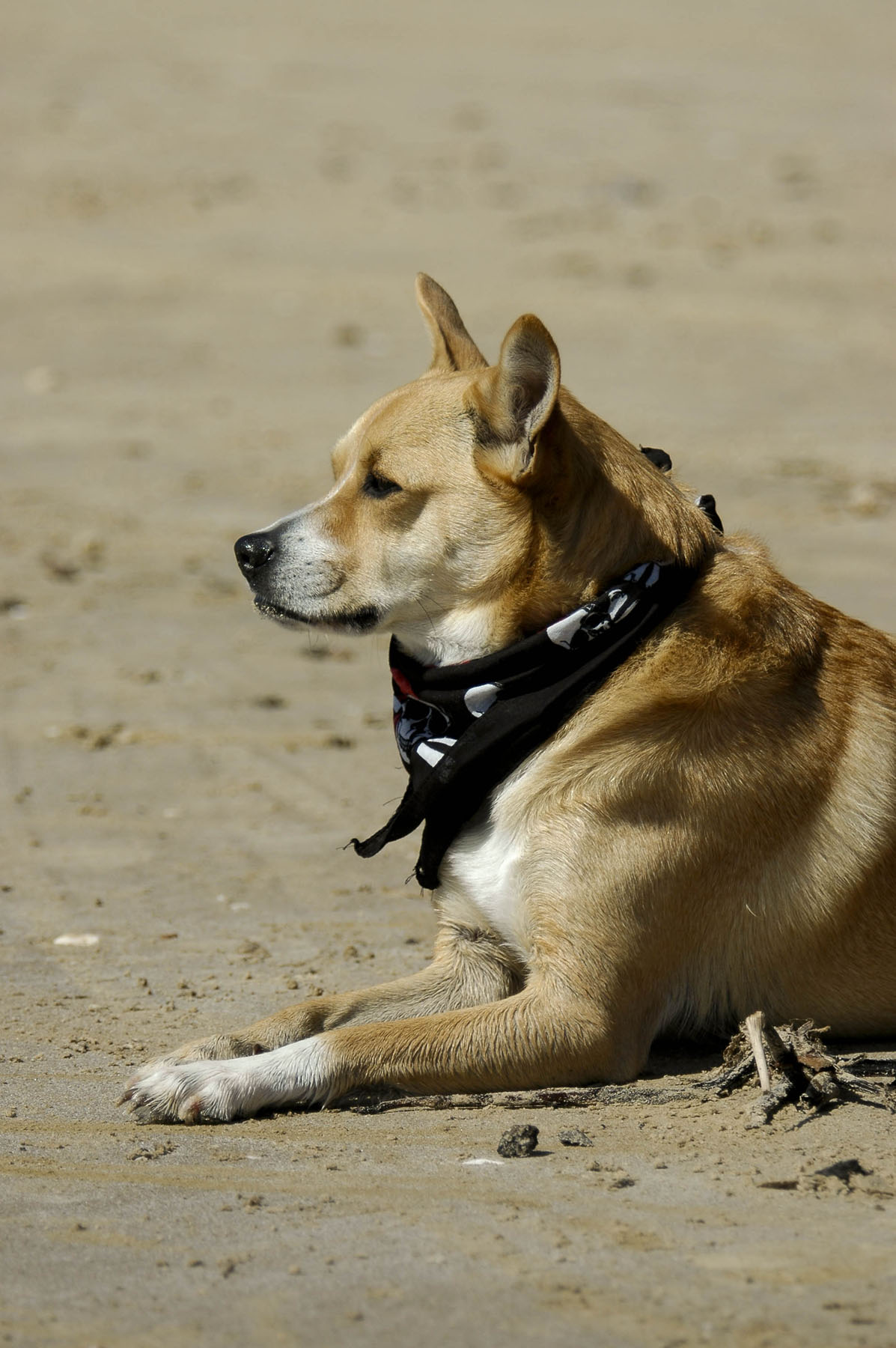 Tasha the Surf Dawg.
Saturday, February 23rd dawned cold, overcast, and a bit windy. Not exactly the kind of day you want to spend at the beach. But this wasn't meant to be a day for working on a tan. I was driving over to Sea Rim State Park to meet up with a hearty bunch of kayakers and surf fishermen to celebrate the unofficial start of the surf fishing season. And to raise some money for the American Cancer Society while we were at it.

Drum Run 2008 is an annual event that has been hosted for the last few years by T.J. Pilgrim and his wife Karen. Many of you know T.J. from several of the local fishing forums where he goes by the handle of "Jolly Roger". This event is not a tournament or competition, but rather a chance for a bunch of fishermen to get together and have a good time while hopefully intersecting with the start of the annual drum run. This year around a hundred fishermen and women of all ages showed up and took over a half mile section of the upper coastal beach front with some driving from as far away as Dallas and the Hillcountry.

I arrived shortly after daylight to find an assortment of vehicles, tents and motor homes lined up above the high tide line. There were a few surf rods set out and a couple people wandering around in need of some strong coffee. Apparently I had missed a pretty good party the prior evening. Between that and the weather nobody was in a huge hurry to launch into the chilly gulf surf. In time, more folks started poking their heads out of their sleeping quarters like groundhogs looking for their shadows. And eventually a few even started rigging their kayaks and readying their gear in hopes the weather would warm up a bit.

Meanwhile, T.J. and Karen showed up with 162 pounds of live crawfish along with sacks of potatoes and plenty of corn on the cob. Terence Boxie fired up his cooker and the smell of Cajun spices filled the air. But right about the time it was looking like kayak fishing was being put on the back burner, the clouds broke and the sun shined through. Within a few minutes kayaks were steadily launching through the surf. I reluctantly left the boiling bugs and headed out with camera in hand to record the action. Yes, I left my rods in the truck. I needed some photos and I know if I bring a rod I'll never pick up the camera.

I arrived among the flotilla of ten kayaks anchored and drifting a couple hundred yards or so beyond the breakers to find that I had missed the first fish. Ty Howard had already caught and released a nice bull red. I settled in and watched. Not much was happening and one by one the players headed to shore. It seems that slow fishing and the lure of boiled crawfish were combining to thin the ranks down to a handful of determined anglers. I wandered around the group for a while snapping a few photos of the guys and their rigs. About the time I was thinking the folks who had headed in might have had the right idea I heard the clicker on Steve Robinson's reel. I paddled a little closer and got the camera ready just about the time he set the hook. It was obvious that this wasn't a lumbering black drum as the fish took off pulling drag. After a bit of give and take Steve hefted a huge bull red into his lap, his first for 2008. A few quick photos and the red swam away to fight another day.

The Solunar Chart was dead on with the start of a predicted peak feeding time as the next twenty or thirty minutes about wore me out. The few anglers still fishing were scattered out over a couple hundred yards and everyone was getting runs. With every "Fish On!" or shrill whistle I paddled like mad to get some action shots. Miles Buescher and his dad Mark had a bit of a circus going on when I got to them. Miles had a big fish running all around their yaks while Mark was trying to clear lines and keep the fish from running around his anchor rope. After a few tense moments and much laughter Miles hoisted a fat bull red into his kayak for a photo session.

Gene Titus had driven all the way from Buda and he wasn't going to be denied. Of course he was the furthest away from my location when he started whistling. I made it over there just in time to capture the landing of yet another big red. Hey guys, I thought this was the "drum run"as in black drum? Throughout the day the only fish landed were huge 40" and over bulls, not that anyone was complaining. Gene attended the Texas Kayak Fishing School a while back when Dean and I were teaching it together. While there he told Dean that his goal was to fish offshore from his kayak. Dean told him he was crazy. Well, here he is a couple years later taking care of business.

No sooner had I finished getting Gene's catch recorded and I hear Steve hollering "Fish On!" By the time I sprinted back to his side of the Gulf I had worked up a pretty solid appetite, so the paddling paparazzi headed to shore. And it was a good thing too because I arrived at the kitchen just in time to get a big flat of the last batch of bugs. There's no restaurant around that can match the meal I had sitting out there on the sand. Kudos to Terence.

The rest of the afternoon was spent hanging out on the beach with a bunch of good people talking about fishing. The kids were running around, surf rods were being tended, and Tasha the surf dog was overseeing it all. It really doesn't get much better than that.

If you'd like to try your hand at fishing "beyond the breakers" I'd suggest taking a look at the "BTB" forum on Texaskayakfisherman.com. T.J. and the rest of this gang are a gregarious group and more than willing to help a newbie get started with tackle and equipment selection. And chances are you'll get yourself invited to join then on their next outing.

A recent incident in Port Aransas should serve as a harsh reminder to all of us who venture forth whether in a kayak or power boat. Mother Nature provides us many rewards in our outdoor pursuits, but she can also be unforgiving at times. On February 17th two young men ventured out before dawn paddling into the cold and treacherous waters surrounding the Port Aransas jetties. It has been reported that this was their first attempt at kayak fishing. They apparently had PFDs on board, but neither man was wearing this vital piece of safety equipment.

The result was a preventable tragedy. Within minutes of launching the men realized that the water was too rough. They attempted to turn back but were overcome and capsized by the waves. One man was able to make it back to shore, the other was last heard yelling for help. His body was recovered ten days later on the beach of Padre Island National Seashore some 20 miles away.

Nineteen year old Stephen Stafford of Dripping Springs was by all accounts a physically fit and very capable young man, but he was no match for the strong currents and cold water. Several mistakes in judgment were made in this situation, but more than likely would've only led to a life-lesson had he been wearing his PFD. According to USCG reports, over 80% of boating deaths could have been prevented had the victim been wearing a PFD. Please think about that before you head out on your next trip.