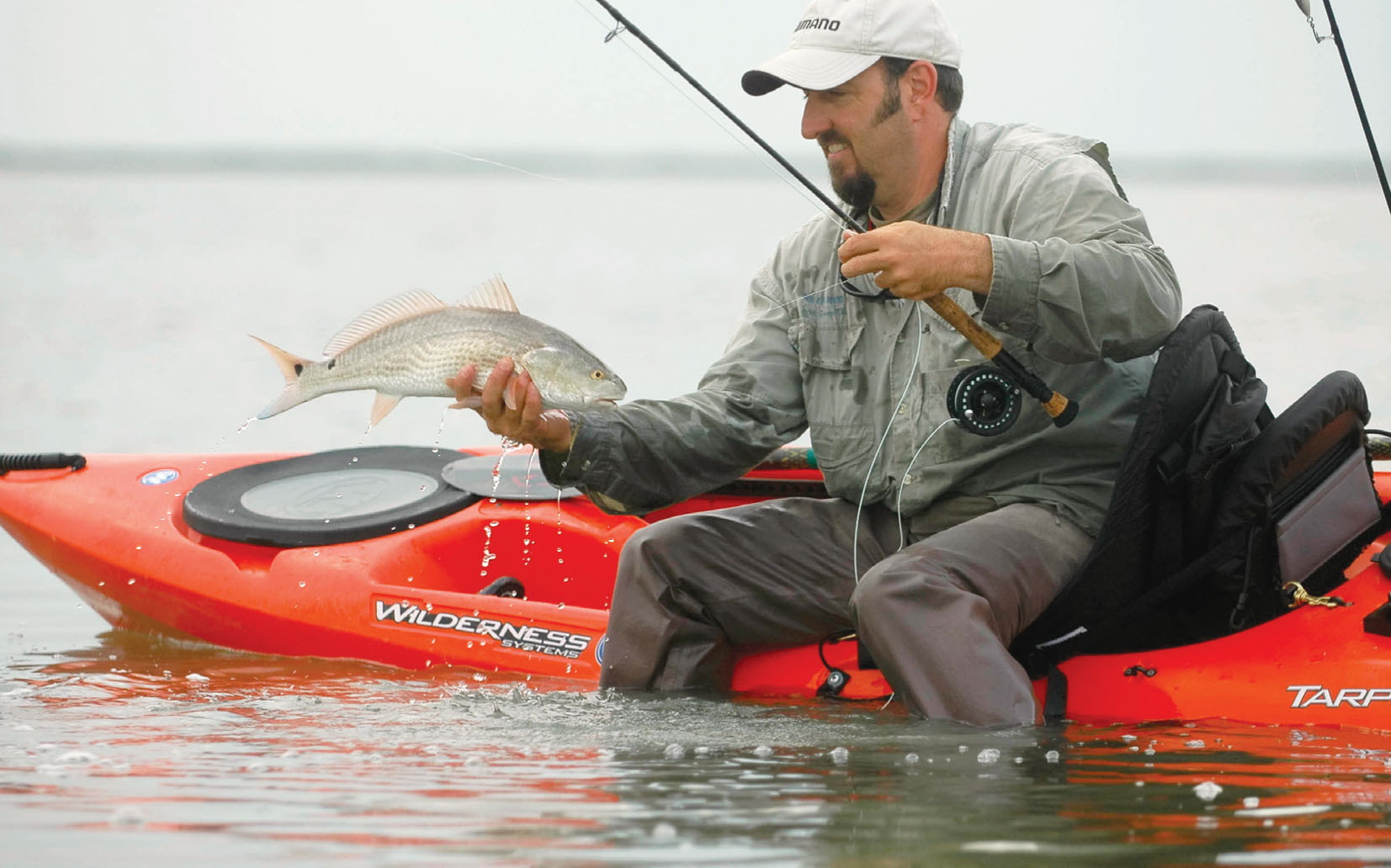 “I’ve got tailing reds all over the place and an open day on my calendar.”

I had been working a store promotion in Corpus for two long days. Seems like during the show season I get to talk about fishing a lot more than I actually get to wet a line. So when my good buddy, Dean “Slowride” Thomas, called with that offer it was an easy decision. Plans were set and I went to sleep that evening thinking about dotted tails waving in the air.

The next morning I met Dean at the boat ramp in Aransas Pass. Yes, I said boat ramp. This trip would give us a chance to tryout his new Haynie as a kayak mothership. The kayaks were strapped alongside the center console and the boat was in the water. All I had to do was step aboard and stow my gear.

There’s nothing new about using a powerboat to ferry the kayaks to more distant waters. Others have been doing so for quite a while, but Dean has been hesitant to make that jump. Who can blame him with Lighthouse Lakes and Brown and Root Flats only minutes down Highway 361? Most days his biggest decision is right side or left side. However, the recent acquisition of the Haynie got him to thinking about expanding his horizons and offering customers the chance to paddle waters that are a bit more off the beaten path.

As we headed down the ICW the sun was just starting to make its presence known in the eastern sky. Dean explained that he’d been out the day before and found a good concentration of reds with scattered pods of tailing fish in some super shallow coves; perfect targets for stealthy kayak fishermen. The problem was they were a long way from the road and prime feeding time was going to be around first light. Thus the combination of powerboat and kayaks was the perfect solution.

The run across the bay was quick and we were easing into our anchorage as the sun was just peaking above the horizon. Within minutes the kayaks were in the water and loaded with gear. Dean eased away while I stayed back and took a few requisite photos. Before I could put the camera away he was sitting motionless at the first point and looking back at me with a big grin. “There they are... please hurry up!”

Apparently it was time to get going. No more than twenty paddle strokes later I was staring at one of those sights redfish junkies dream about. Within easy casting distance there was not one, but two large groups of reds drilling holes in the bottom. And beyond them was another group. Awesome! Before I could put the paddle down Dean sailed a Spook Jr just past the closest tails. A couple of twitches and the topwater disappeared in a melee of splashing reds. The hook-up was solid and the first cast of the day resulted in a nice slot fish.

I’d like to say every cast brought the same result, but it wasn’t quite that easy. Some of these fish were so focused on the shrimp they were rooting out of the grass that they never noticed the lure. It would seem to be a sure thing to throw a DOA shrimp into the pile and come away with a hungry fish, but on this day a noisy topwater was more often the answer. The fake shrimp just wasn’t getting much love.

At one point I made a beautiful on-target cast with the DOA. Dean complimented the toss with, “That ought to get one,” as it landed just in front of the lead fish in a group of twenty.

No sooner did the words come out than I saw a swirl and felt the surge of a good fish. Then the line went slack.

“No, but he isn’t pulling hard enough to be a keeper,” I replied.

How the heck could I pick an undersized red out of a pack of upper-slot fish? Turns out it was a decent trout. Not what I was looking for, but it would do. Of course Dean had to toss his Spook into the still tailing reds and draw a hefty strike. I knew I was going to hear about it.

“I always knew you were a trout guy at heart,” was the quip I had to endure.

The next laugh was on him. I had the camera out trying to get some action shots when Dean waved me over. He was sitting thirty feet from a huge pile of rolling, splashing, happy redfish. With the fly rod in hand and a huge grin he said, “Get a picture of a master in action.”

I adjusted the focus as he laid the fly a few feet past the party. My finger was on the button, the lighting was good, the fly was where it needed to be and… nothing. The fish were moving closer now. The next cast was more like just dangling the fly from the rod tip… still nothing. As they got closer I held the camera with one hand and tossed the DOA.

“Fish on! Nice job there fish master,” rolled immediately off my tongue.

It was one of those magical mornings. Fishing with a great friend, razzing each over screw-ups and blown chances, then cheering success moments later. We literally never had more than a few minutes between the sightings of tailing pods. This went on for two solid hours.

We even got cocky and started trying to set up some photo opportunities. The results were comical at best. Schools of tailing fish don’t always listen to the director. Suffice to say we didn’t get any of those really cool action shots, but enough good ones to chronicle a great morning on the water.

The Texas coast is blessed with miles of shallow flats, marshes, and back lakes. Many are too soft to wade and too shallow for most powerboats. As most of you reading this have realized by now, kayaks are the perfect tool to effectively fish these areas. Unfortunately most of the best areas are simply too far from public access for a comfortable paddling trip. Sure, you can plan a multi-day trip and camp out on a spoil island if you have the time and energy. And those trips can be very rewarding, but the reality is that the vast majority of us can’t pull that off as often as we’d like. Adding a powerboat to the arsenal can really open up a whole new world for the kayak fisherman willing to give it a try.

If you’d like to try kayaking away from the roadside crowds give Dean a shout. He’s now offering guided trips utilizing the Haynie to access areas around Aransas Pass and Rockport that rarely, if ever, see a kayak. He can be reached at www.slowrideguide.com  or 361-758-0463.