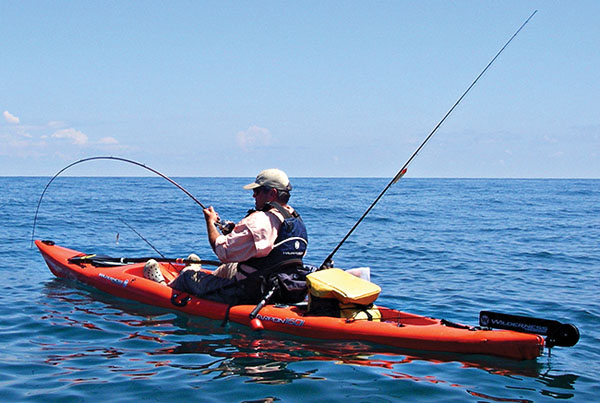 I'm usually so danged busy these days that I don't take much time to reflect on the past, but today's cold and rain had me penned in the house and I got to think about things. I suddenly realized this was the end of not only a year; we're getting ready to slip into a new decade. What the heck are we going to call this past decade anyway? The 70s, 80s, and 90s were a no-brainer. Is this one the Oughts or perhaps the Aughts, as in ought-three or aught-seven? The dictionary says they both work.

Whatever you want to call it, this has been a pretty cool decade for me personally. I've changed careers, watched my two daughters transform into beautiful young women, written a couple books and found my way into kayak fishing. I also purchased a parcel of land on the coast where I will eventually build the home where I will live out my golden years with my wonderful wife. Most of all I've noticed a change in my overall attitude. I seem to appreciate things in different ways. Days on the water or at the hunting camp with family and friends seem a bit more special. Quietly paddling a bayou and just watching the wildlife is now a treasured experience. Not that I didn't occasionally savor these moments in the past, it just seems that I used to be so focused on the ultimate goal of catching fish or downing a deer that I might've missed a few things. Perhaps you could call it a mid-life awakening; it certainly isn't a crisis in my book.

Along the way I also got to thinking about all the things I want do in the coming year. The list is long and kayak trips are scattered throughout. Although I've had the good fortune to paddle and fish many locations along the Texas coast, there are still many more I want to experience. My new calendar is now on the desk and I'm checking the schedule to see where I can fit at least a few of them.

I think I'll start the year in search of that personal best trout. It's been far too long since I put my hands on a truly big trout and I need to change that. Perhaps I can finally break that magical thirty-inch mark. I've been close a few times, but "twenty-nine and three-quarters" just doesn't have the same ring as "thirty." January, February and early March are obviously the prime months and it would be a fine way to start the new decade. A trip to Baffin, another into East Matty and possibly a mother-ship trip to Gladys' Hole in Port Mansfield should do the trick.

March and April will be windy, as always, and a great time to greet the reds in the protected marshes. Luckily our coast is blessed with thousands of acres that fit the bill. I've spent my life exploring the marshes of the Galveston Bay system and I think it's time to check out some other areas. The Guadalupe Delta has always intrigued me and it's near my chosen retirement location. I think I need to spend a few trips checking that place out for future reference. It looks awesome on Google Earth and if any of you out there have some experience in that area and wouldn't mind a partner on a trip I'd appreciate it.

May is just too full of possibilities. The water temps will get right, the winds should lay and the fishing will break wide open. I haven't fished the beautiful flats of the Lower Laguna in a while. The shrimp should have the reds all lathered up and casting to those pods of rolling bronze backs with the fly rod is a special treat. I've been wanting to do a multi-day camping/kayaking/fishing trip and that area lends itself perfectly. The weather should be right and the fishing at its peak. Yep, I've talked myself into it. That trip goes on the calendar.

June, all I can think about are the many trips in the Aransas Pass area over the last few years. I'll surely make a trip around that time to get in on the consistent tailing action on those flats. And as many times as I've paddled the Light House Lakes I've never really explored them. I need to change that. Instead of going to the same old areas that have produced in the past I think I'll spend a couple days in the far back lakes poking around for new favorite spots.

Once the heat of July settles in I think I'll head way south. I still haven't caught my first Texas snook. Maybe I can talk Ernest Cisneros into showing me around South Bay. That's one area I've never gotten around to fishing and I should be ashamed. It is perhaps the ultimate kayak fishing destination on our coast. A snook on a topwater in Texas would be a highlight of the year.

August will find me looking for a window to get offshore and chase kingfish. It isn't something I haven't ever done, but every trip out there is different and special. The days that allow kayaking offshore are generally few and you just have to remain flexible so you can hit it when it gets right. And if the fishing gods smile upon me, perhaps I can run across some tarpon among the shoals of baitfish that roam the blue-green water a couple miles off the beach. I caught my first Texas tarpon this year, but it was in a power boat and it was just a little guy. A full-grown tarpon from the kayak sounds interesting.

Duck hunting from a kayak is something I've intended to do since I bought my first one. In my younger days I hunted waterfowl quite a bit, but I no longer think of a death march through a muddy marsh lugging a sack of decoys as fun. The kayak is a perfect tool to make that exercise enjoyable again. September teal season will offer an opportunity to try it out. Of course I'll have to bring a rod along for the reds that'll be starting their fall feast in those same marshes.

If the overnighter to Port Mansfield goes well I might do another in the cooler weather of October. The Port O'Connor paddling trail over to Matagorda Island has been on my to-do list for quite some time. Exploring the back lakes around Mule Slough should lead to some fine fishing along the way. This is another area where I've fished the edges, but never ventured deep enough for real exploring, time to rectify that.

November is flounder time on the upper Texas coast and nowhere have I caught more flounder than in Sabine Lake. I think I'll get my Louisiana fishing license and head over to the east shoreline. All of those marsh drains should be money early in the month, before the full-fledged migration gets ramped up. Once I get my fill of flounder I'll ease up into the marsh ponds for what should be some awesome redfish action.

Come December I might have to take a break from all of this kayak fishing fun and spend some time sitting in the deer stand on a cold and rainy day reflecting on the wonderful year and all the adventures it brought. I hope you and yours have enjoyed a great holiday season and you are now inspired to search out your own adventures in the decade ahead.