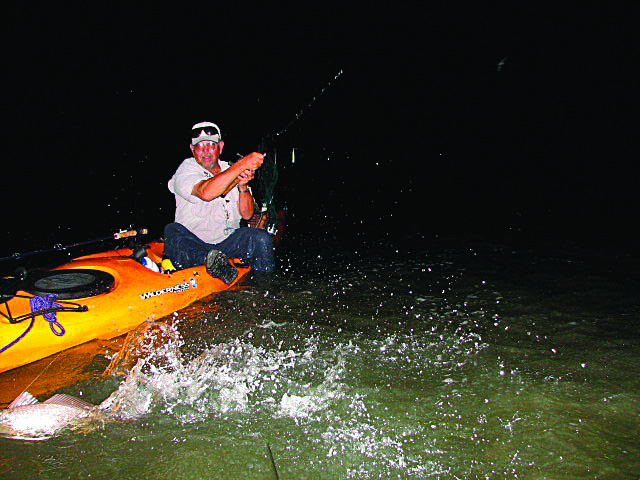 Ken Bankes hooked up to a nightime redfish. Photo by Dean Thomas.

It's about time to head over to the dark side. No, I'm not talking about power-boating or joining PETA. The dark side I speak of is fishing when the sun don't shine. Night fishing from a kayak can be the ticket to getting your fishing fix without ending up suffering a heat stroke. I don't think I need to remind you that August and September are traditionally two of the hottest months along the Texas coast. The scorching sun coupled with dead calm winds can wilt even the most hardcore fisherman. Many folks simply restrict their fishing time to the period from dawn until the sun rises far enough above the horizon to start the oven. On the worst days, that time period might only be two or three hours. For those of you who don't live close to the water it gets to the point that you're spending as much time on the road as you are on the water so why not take advantage of the dark and add a few hours to your next fishing trip?

The most common objection I hear to fishing at night is that guys don't want to spend an entire night out on the water. They tell me it's simply too much lost sleep to be worth it. Somehow they've equated night fishing with pulling an all-nighter. Well folks, it doesn't have to be that way. There's no rule stating that you have to be out there from dusk until dawn. Why not plan a late evening trip that extends two or three hours past dusk? Or how about getting up and hitting the water at 3:00am instead of timing your launch with sunrise? Watch the tides and solunar charts to pick a time where the prime feed occurs just before dawn or right after dusk. You might lose a few hours of sleep, but with a little planning I'm sure you can work in an afternoon nap to make up for it.

Excuse number two: The boogey man. For some reason it seems like there's more potential to run across a giant shark or some other man-eating creature during the night. I'll be the first to admit that every noise is amplified in the dark. Every splashing mullet or school of spooked baitfish sounds like a bull shark on the attack. In reality the potential threats are pretty much the same as during the light of day. You are far more likely to suffer oyster cuts or hook yourself than get your leg gnawed off by a killer shark. A little common sense and caution should get you through the trip unscathed, just like a day trip.

What it all comes down to is that there is something strange about being out on the water in the dark. Man is very vision oriented and restricting or taking away our vision makes us uneasy. We rely heavily on our sense of sight in most every activity. And this certainly holds true for fishing. Everything from simple navigation to locating feeding fish is easier in the daylight. Ever try throwing your baitcaster on a pitch black night? You'd be surprised how hard it is to know exactly when to apply the right thumb pressure as the lure is touching down. Even the most educated thumb can experience a professional over-run. And we won't even get into tying knots in the dark with 40-something-year-old eyes.

So how do we overcome the obstacles and make a successful and safe trip? Just like our daytime endeavors, it's all about equipment, knowledge, and common sense. I'll get to the equipment in a minute because all the gear in the world can't overcome a lack of the latter two. While it is always important to have a solid respect for the water while kayaking, it is amplified at night. Getting yourself into trouble in the dark, whether due to an accident or bad weather, might mean spending several extra hours waiting for rescue crews to locate you. Nighttime is not the right time to push the limits. My night trips take place during stable weather and are restricted to well protected areas that I am intimately familiar with. This is not the time to go exploring new territory. Stick to places you've fished in the past so there won't be any unseen surprises. You'll want to be familiar with the depths, any structure in the area, and how the tidal currents affect the area. And go with a buddy!

Properly equipping yourself for the task at hand is essential. Of course you'll want all of your usual safety equipment such as a good quality PFD and a well-stocked first aid kit. Beyond the normal gear, right at the top of the equipment list is multiple sources of dependable lighting. There are so many great new lights on the market these days that weren't available a few years ago. I can remember wearing a big awkward headlamp wired to a pair of six volt lantern batteries strapped to my waist and flashlights that were so dim and unreliable you could do better by lighting a match. Our spotlights required a car battery. Now I wear a tiny headlight from Petzl with five LED lights powered by watch batteries. The whole rig weighs just a few ounces and provides enough light to confidently walk the trail down to the launch. It even shines bright enough that I can see that damned spider web size mono when I need to tie on a new lure. I've also found a small spotlight made by Pelican that would make a freight train headlight jealous. This is my go-to light for signaling boaters as well as locating landmarks. It runs for hours on a set of four C batteries and is watertight to 500 feet. The total weight with batteries is maybe two pounds. Of course you'll also need the USCG required 360 degree white light. There are several battery operated models on the market made specifically for kayaks.

You'll also want some form of dependable communication. We all carry cell phones these days, but as most fishermen can attest to they don't handle moisture very well. A few drops of water in the wrong place is a problem. Unfortunately most kayak disasters involve getting wet. Go ahead and carry your cell phone with you in some sort of dry storage, but get a handheld waterproof VHF for emergency communications. Store the VHF in an easily accessible location so you won't have to go digging for it. And while we're on the subject of electronics, a GPS is mighty handy. Not only will it help you navigate through the dark, it'll also provide an accurate location in the event you have to use that VHF.

Now, on to the whole reason we're out there braving the night. I can tell you from experience that the trout and reds you seek love to feed under the cover of night. This holds true throughout the year, but really comes into play when it gets hot. One of the main reasons is hot water holds less dissolved oxygen. Lower oxygen levels cause the fish to become lethargic. The cooler temperatures and increased oxygen levels at night often lead to the increased feeding activity we're looking for. The predators also enjoy using the cover of darkness to their advantage in ambushing baitfish. One thing I've noticed about night fish is that they seem to be much more aggressive and less skittish.

There are basically two methods of night fishing. The one most everyone has done at some point is fishing around pier lights. This is a highly effective route for big numbers of small fish. Sure there are occasional catches of larger trout and reds under the lights, but the majority of the time you'll be culling through the dinks to get a few keepers. A kayak can be a great tool for cruising through the canals of waterfront communities looking for productive lights. Many homeowners have their pier lights set on timers and they'll come on shortly after dark whether the owner is home or not. Some lights are better than others and you might need to test several before you find a good one. And while it is true that the waters are open to the public, it is bad form to horn in on a light being fished by the homeowner. You've got the mobility of your kayak. Avoid the conflict and move on to an unattended light. I tend to throw very small soft plastics and topwaters around the lights. Clear or silver lures seem to draw the most attention.

For consistently larger fish you'll want to move away from the lights and get out onto the flats and in the marshes. I wish I could say there was some great secret to catching these fish, but it really isn't a huge mystery. The big trout might be found in shallower water than normal, but for the most part I fish the same areas I fish during the daylight hours. And although they can be caught with most any type of lure, I prefer a medium sized dark topwater. These are aggressive fish that usually won't hesitate to slam a floater. The sound of a big trout busting a bait in the dark has to be experienced to be fully appreciated. If you like topwater bites, you need to try this.

Probably the most asked question about night fishing is in regards to the moon. Which is better, a full moon or no moon? My personal preference is a big full moon rising right after the sun sets. With that said, I've fished all different moon phases and caught fish. It still comes down to the same things as your daylight trips. You need tide movement, bait fish, and preferably a major/minor feeding period. I'd suggest you choose a full moon night for your first few trips for the simple reason that you'll have more light to work with. A new moon period can be incredibly dark and you might want to get some experience under your belt before attempting a trip under those conditions.

So what are you waiting for? Now that you know there aren't any big secret handshake kinds of mysteries involved in nighttime kayak fishing all that's left is finding a partner to join you. Good luck and be safe out there.