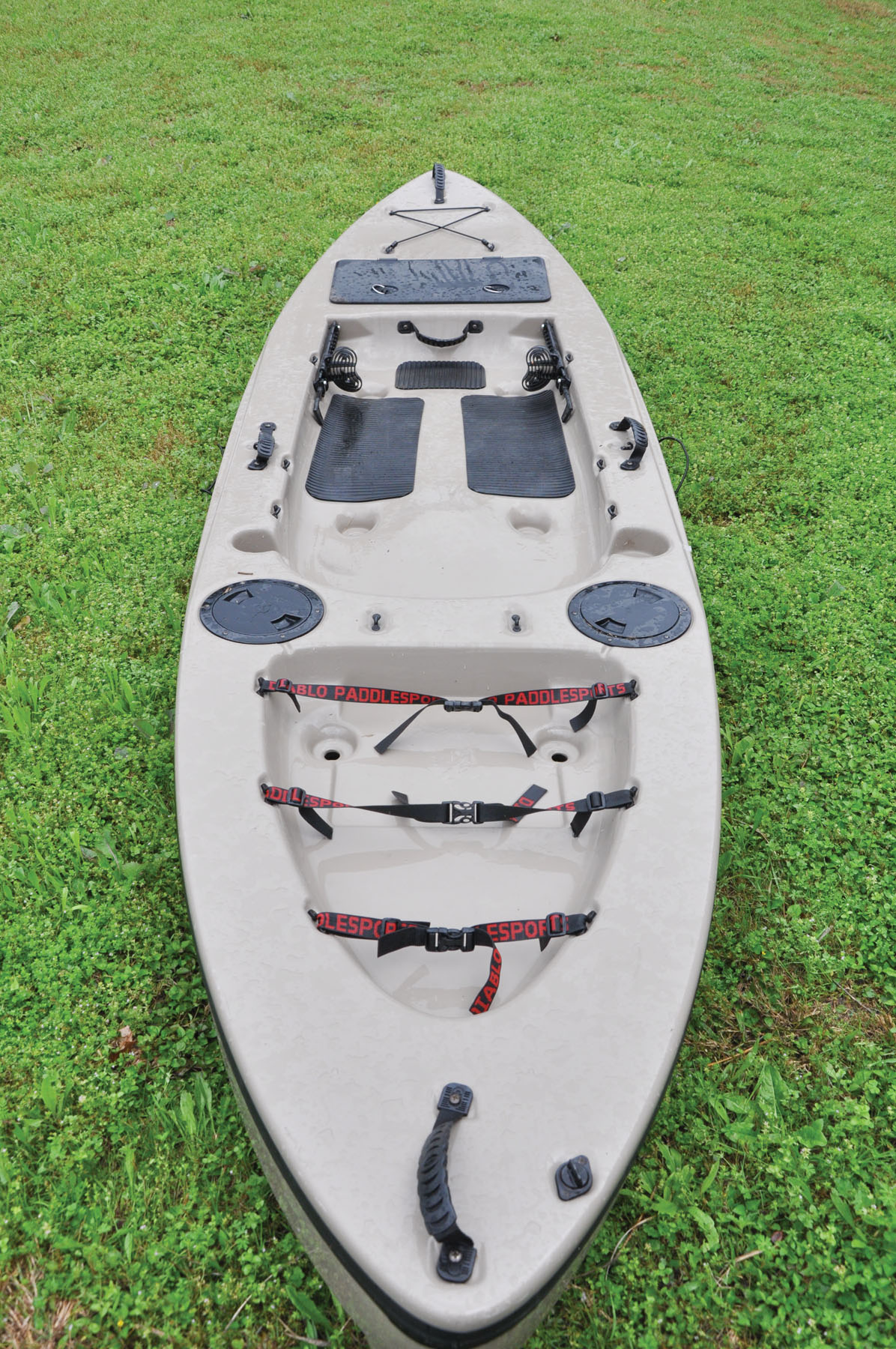 Somewhat traditional on the underside, the Diablo Adios should offer a very stable platform for stand-up fishing.

With the arrival of spring I start getting questions from folks looking to get into kayak fishing. Most have been thinking about pulling the trigger but find the vast array of kayaks now available too much to decipher. It used to be fairly simple to narrow their choices by just asking a few questions about the way they intend to fish. In years past I had paddled pretty much every available kayak suitable for fishing. That isn't the case any longer.

I've written about several of the upgrades to the classic models as well as some of the newly introduced kayaks that have come out over the past couple years. While I applaud the thought and effort put forth by the kayak industry to make their boats more useful to anglers, most changes have been minor tweaks and variations on the standards. It's hard to come up with something really new for the sit-on-top kayak. During a recent stroll through Fishing Tackle Unlimited's kayak department I stumbled across a couple new boats that piqued my interest.

Both have somewhat similar histories of development and come from small companies right in our own backyard - Kajun Custom Kayaking Company (KC Kayaks) of southern Louisiana and Diablo Paddlesports of Austin. Both companies were started by kayak angling buddies who wanted something to suit their specific needs that weren't being met by the big guys. Fishermen just like most of us, but instead of wishing for a better boat the way I tend to do, they set out to build their own. It is really interesting to me that they both had the same basic end goal, a kayak for stand-up sight-casting.

The guys at KC Kayaks came up with the K12 for plying the marshes of south Louisiana. They are marsh rats like me and love sight-casting to redfish. The higher your line of sight, the easier it is to spot your target and they sought to raise themselves as high as possible without chancing the unexpected splashdown that stand-up kayakers have been known to experience from time to time. To achieve their goal they came up with a rather unique looking craft that employs a sort of catamaran design. Or maybe it's a tri-hull. The bow starts off in the standard manner to cut through the water. The cat hull comes into play just behind the bow making it a tri-hull. Towards the rear of the boat the center V disappears making it look more like a catamaran at the stern.

The result is a super stable boat that can be paddled as a regular SOT or poled/paddled while standing. With that in mind they designed it with a large flat floorboard making it easy to move around a bit instead of being restrained to the relatively small space afforded in most SOTs. The seat is somewhat elevated and rides on a sliding rail to allow you to move it out of your way while standing. They also designed the seat to be flipped over on the rails for use as a mini poling platform placing your feet about sixteen inches above the water's surface. I guess you could call it a micro-flats skiff.

In addition to these unique features, they put in plenty of open storage space as well as access hatches for dry storage and a couple of flush mount rod holders. The guys at KC have kept it pretty simple with regards to accessories. They offer an extra seat which can also be mounted on the rail system to turn the boat into a tandem and a trolling motor mount if you are inclined to let the battery do the work.

The founders of Diablo Paddlesports grew up paddling the waters of central Texas. They wanted a boat that could float through the shallow rocky streams as well as afford them the ability to stand up and sight-cast in the clear waters. Their idea was to combine the attributes of the sit-on-top with the new craze of stand-up paddleboards. The guys sought the assistance of long-time kayak designer and founder of Ocean Kayaks, Tim Niemier. It's hard to go wrong when you get Tim to help design a kayak, paddleboard, or in this case, a stand-up paddleboard-kayak.

The result of their combined effort is a pair of unique tools for the kayak fisherman. The Adios is a twelve and half foot craft with a thirty-six inch beam and the Chupacabra is ten and half feet with a thirty-two inch beam. The two are very similar outside of the size difference. They are low profile boats with shallow tri-hulls designed to float shallow and paddle well from either a sitting or standing position while providing outstanding stability. Like the KC12, these models have a large flat floorboards with nothing in the way of your feet. The built in seat is similar to other SOTs as are the adjustable footpegs. They also offer an optional raised folding seat similar to those found in Native brand kayaks. This seat elevates you ten inches providing a more comfortable ride as well as making it easier to go from sitting to standing. Another feature to aid the process of getting to the standing position easily is a pull-up strap attached to the front area of the cockpit. Both models have rear tankwells for wet storage and large hatches on the bow for access to dry storage inside the hull.

While I haven't yet had the opportunity to paddle any of these new boats, I can say I'm intrigued. If you've read my ramblings on these pages over the years you already know that I frequently stand up in my kayaks and these models appear to be perfect for what I like to do. In the coming months you can expect to see at least a couple reports on trips employing their use along with a breakdown of my thoughts on their practicality for our coastal fishing.

If you can't wait that long you can always go to your local dealer to see if they have a rental option or perhaps an upcoming spring demo day. Fishing Tackle Unlimited has both brands available for rent and I'm sure they will have them at their April 28th demo day event. And if you are like the folks mentioned at the beginning of this article, there is no better time than an on-the-water demo to sort through all the choices to find the kayak that best fits your needs.