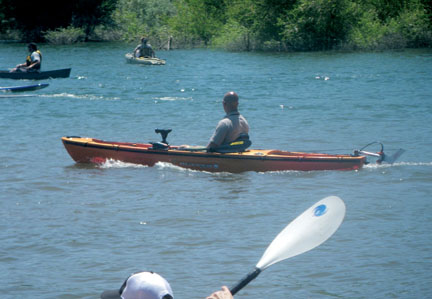 Torqueedo powered Wilderness Commander.
It seems like just a couple months ago that I was writing about the latest and greatest kayaks being introduced at the 2008 Outdoor Retailer Show in Salt Lake City, yet here I am getting ready to do it again. Where did the year go?

While walking the show visiting various booths, I realized this is already my fifth year of attendance. Every year I keep thinking it has all been done and then the designers dream up something new, or at least put a new spin on an old design. This year the most intriguing thing I saw was not a kayak.

Something I've heard continuously from my non-paddling friends, "I'd get a kayak if they'd put a motor on it." Well, the kayak companies must have been hearing the same thing; all the manufacturers seem to be getting on board with some sort of electric motor. Legacy started it last year with their Volt system, which is basically a short-shaft trolling motor married to their Native Ultimate kayaks.

This year there's a new player acting independently of the kayak manufacturers. Torqeedo is a German company that is designing high-efficiency electric motors for boating on lakes where combustion engines are not allowed. The Torqeedo is unlike any motor I have seen. Most of their models were designed similar to small outboards up to a 9.9 hp equivalent. But the one we're interested in is a new motor designed specifically for use on kayaks. They are working directly with Confluence and Hobie to provide motors for some of their new boats, however the motors can be adapted to fit most any kayak with a simple ball-mount base. Torqeedo can be connected to the boat's rudder system allowing you to steer with your foot pedals.

In visiting with the co-founder of the company I discovered that this isn't just another trolling motor. The high-efficiency motor has a 1 hp motor power equivalency powered by a 28.8 volt lithium manganese battery. In testing, it powered a Hobie Outback to just over 6 mph. The range varies depending on the speed selected, but at moderate levels it can easily carry you through an entire day of fishing. The remote throttle has an on-board computer with integrated GPS that determines the battery level, current speed and remaining range. The information is displayed right there on the throttle unit. Another cool feature is a magnetic kill switch that stops the motor should you happen to fall overboard. I'm working on getting a model for testing and will hopefully bring you a full report soon.

On the kayak side, there were several new models that should get the attention of kayak fishermen. The Confluence booth had a boat that caught the eye of everyone who walked by. It was a special edition of their new hybrid kayak/canoe, the Wilderness Systems Commander. I immediately fell in love with the slick, black Kevlar composite and teak trim. It was absolutely gorgeous and one of only fifty to be built. Unfortunately, the five grand price tag ended the brief love affair and sent me in search of the plastic alternative on display nearby. The basic design is similar to the Native Ultimate with a few tweaks including a seating area on top of the deck behind the cockpit. It gives you the option of sliding the phase three seat under the deck and perching yourself up top to gain a better view while sightfishing. Another option would be to slide the cockpit seat forward and let a child or small adult sit on the deck. The hull design reminds me of the ultra-stable Ride which should make this an excellent platform for those who prefer to stand while fishing.

Speaking of standing, Native has a new stand-up fishing kayak. The Kevlar Osceola Elite Paddleboard looks like a surfboard on steroids. At 12' long and 31" wide it is a super stable watercraft that allows you to pole or paddle silently through skinny water searching for redfish. After talking with fishing guru, Jimbo Meador, I'm really looking forward to giving this thing a try. It isn't something you'll want to paddle across open water but, if you have a shallow fishing hole near a launch, this could be the ticket for sneaking up on spooky fish. Light weight and slim profile make it the perfect fishing platform for anyone looking to mother-ship to distant marshes.

Freedom Hawk Kayaks is another company that offers kayaks for stand-up fishing. Their original model, the Freedom 14, came out a few years ago and garnered some interest from the paddle-fishing crowd. The stern consists of two separate sponsons. When folded, the boat looks and performs like a typical sit-on-top kayak, but the sponsons can be rotated out in a V to provide extra stability. The drawback to that design is that the kayak becomes very inefficient and difficult to paddle. It also tipped the scales at around 85 lbs. Their new 12' model has answered these shortcomings and it looks like they now have a winner. The Freedom 12 has the same sponsons but instead of forming a V, they now deploy parallel to the hull making it much easier to paddle. The weight of the new boat is a more manageable 65 lbs with sponsons attached. You can also detach them for loading and unloading making it even easier to handle.

I could go on for another page talking about the various tweaks to existing models and a bunch of new accessories that you'll soon see at your local paddlesport dealer but, unfortunately, I have run out of space. If you see a guy zipping along with some funky looking motor hanging off the back of his kayak, wave me over and check out my Torqeedo.