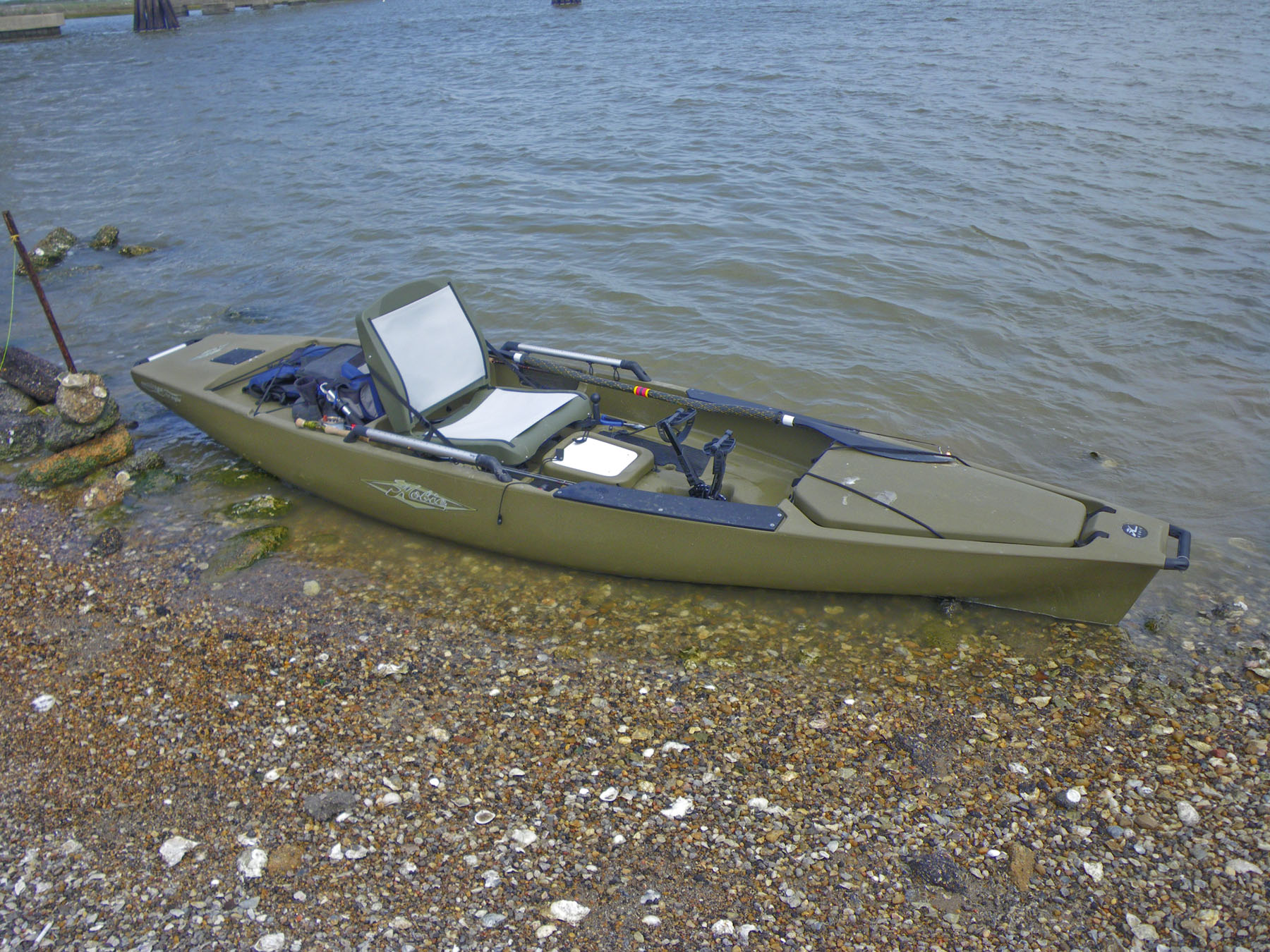 Hands-free pedal-power of the Hobie Pro-Angler allows focusing all faculties on becoming a better fisherman.
In fishing circles you often hear, "He's a damn good fisherman." The other day sitting in a deer stand I got to thinking about that phrase. What does it really refer to and how does one get that honor bestowed upon them? We've all said it, usually in reference to someone who consistently catches fish when others don't or always seems to be on top end specimens. We know who they are, but what makes them different. Due to a serious lack of game movement under the influence of the full moon I had plenty of time to mull it over.

I thought of all the really fine fishermen I have been blessed to share a tide with. I thought of how they approach this game of angling. I pondered their actions on the water and their abilities with a rod and reel. I also considered the many rookies who I've taken fishing as well as a good many more who I've shared a boat with who had a great deal of experience but were, how shall I say thisbelow average.

One thing I arrived at fairly early on is that there is no way to judge rank based on uniform or equipment. In fact, the opposite seems to be true quite often. Those dressed like they just stepped out of a catalog with top line rods and reels don't necessarily have it all together. No doubt we've all seen the yahoo with the $40,000 bay boat potlicking off of those who really know what they're doing. Yet one of the best fishermen I've had the pleasure to fish with, a guy who consistently stays on solid fish year round, paddles a kayak and often shows up with nothing more than a plastic baggie full of soft plastics a couple beat up topwaters and a reel that sounds like a pepper grinder. I'm not really sure he could tell you what brand rod he uses, but the dude catches fish like nobody's business.

Don't get me wrong, most of the really solid anglers own quality equipment that is often treated better than any of their other possessions. I know one who's so meticulous that he cleans his reels even when they don't need it. That's just crazy in my book, but knowing your rods and reels are solid and won't fail on you helps clear your mind to focus on the business at hand. Just don't fall into the trap of thinking that the guy with the best gear is the best fisherman in the group. Regardless of the chosen gear, top anglers are extremely proficient; wielding their rod and reel as if it were an extension of their body.

Another area of equipment does tend to lend a clue, however. And that is the tackle box. Almost without exception the best anglers I've run across carry a fairly small box of lures. They are by no means the same from angler to angler, but these weapons are carefully selected and narrowed down to the essentials in which the angler has extreme confidence. You'll also notice that the really good anglers aren't constantly tying on different lures. They know that if the fish are present and feeding they can usually get them to eat what they're throwing. They aren't necessarily against trying something new, but you'll seldom see them jumping on the latest greatest gotta-have lure.

So after eliminating the "looks good" factor I started thinking about anything else that could tie these folks together. One would think that age could be a determining factor as the total level of experience would surely tilt the odds. However, as that thought came to me I began realizing that I've come to know a whole bunch of relatively young guns who are pretty dang good. What they lack in years they make up for with ability and intelligence. With the addition of experience they'll be among the best on the water if they aren't already. Years on the water will teach you what to do in order to catch fish when the going gets tough and therefore cannot be totally discounted, but I've also known some salty old guys who still don't get it. So it's not age.

Methods do seem to play a part, though it might not be what you think. A common denominator among the "damn good fisherman" I know is their preferred methods for working an area. They've chosen the area they want to fish based on experience and a hunch that their targeted species will be there. So upon arriving at their destination they are going to take their time to thoroughly work the area. They have confidence and are in no rush to try something else on the other side of the bay. Given this, it is no surprise that their methods often include wading or kayaking. Think about it, most of the quality fish I see in pictures are being held by waders and kayakers. Poling skiffs are another method gaining popularity that fit this same mold. All of these allow the angler to quietly enter an area and thoroughly work it over. It is an advantage that often leads to a quality bite.

This isn't to say that the salty dog is married to one particular spot all day. No doubt the best anglers have a carefully thought out second, third or fourth option based on conditions, experience and that all important hunch. If location number one isn't going to work the move will be made and the next stop will receive the same quiet, methodical approach.

But as I sat staring at the empty brush country in front of me there was something else nagging at my thoughts about what it takes to achieve "damn good fisherman." It is too obvious that the solid fishermen will know how to use their equipment, formulate an educated plan and have the ability to execute that plan. Given enough time and effort these skills can be learned and can put you in that "10 percent of fishermen who catch 90 percent of the fish", but what is the thing that puts an angler in the elite status?

As I stated at the start of this rambling, I fish with a variety of people. Quite often it is with someone I've never been on the water with. They have a wide range of experience from pure rookies to folks with years under their belt, yet within the first thirty minutes I can usually sense how successful they'll be. Sometimes it is based simply on their casting skills, but more often it is in how they react to the clues they are presented with. If you can see the wheels turning trying to figure out where to cast when a red blows up a shoreline, it's going to be a long day. However, if they turn and cast without thinking you know they've got it.

It hit me that this is the point where anglers arrive at the most important fork in the road to angling success. I think it is a predator's instinct, something you either have or you don't. It is the innate ability to know that the baitfish are bunching up because a sow trout is lurking and dropping a Corky into the right position to draw a strike without spooking her. Knowing that the splash you heard behind you was an attack by a redfish and then immediately dropping a cast on the spot without thinking about it. Understanding subconsciously how the predator fish will orient to a piece of structure to ambush their prey. Basically, it is the ability to tune in to the surroundings and have a clear understanding of what is going on in the world of predator and prey without having to think too hard about it.

It is something we are all born with. It's in our DNA to be predators, but I think many of us have become so domesticated through the generations of easy living that it sometimes gets suppressed. When we get hungry we just walk over to the fridge instead of having to chase down our next meal. People who are lucky enough to spend large chunks of time outdoors are more likely to cultivate and hone that instinct. I know that I can feel it when I get to spend multiple days on the water or in the field. The longer I'm out the easier it is to reconnect, but when work or other obligations keep me in civilization for an extended period there is something missing. Perhaps that is why we who call ourselves outdoorsmen will do most anything to dodge other obligations in favor of kayaking deep into a marsh or sitting for hours in a deer stand.

And now that this bit of deep thinking is complete, I believe I'll slip back out to the tripod. My instincts are telling me the deer will be on the move after this cold front. Get yourself outdoors and get reconnected, it's good for the spirit.