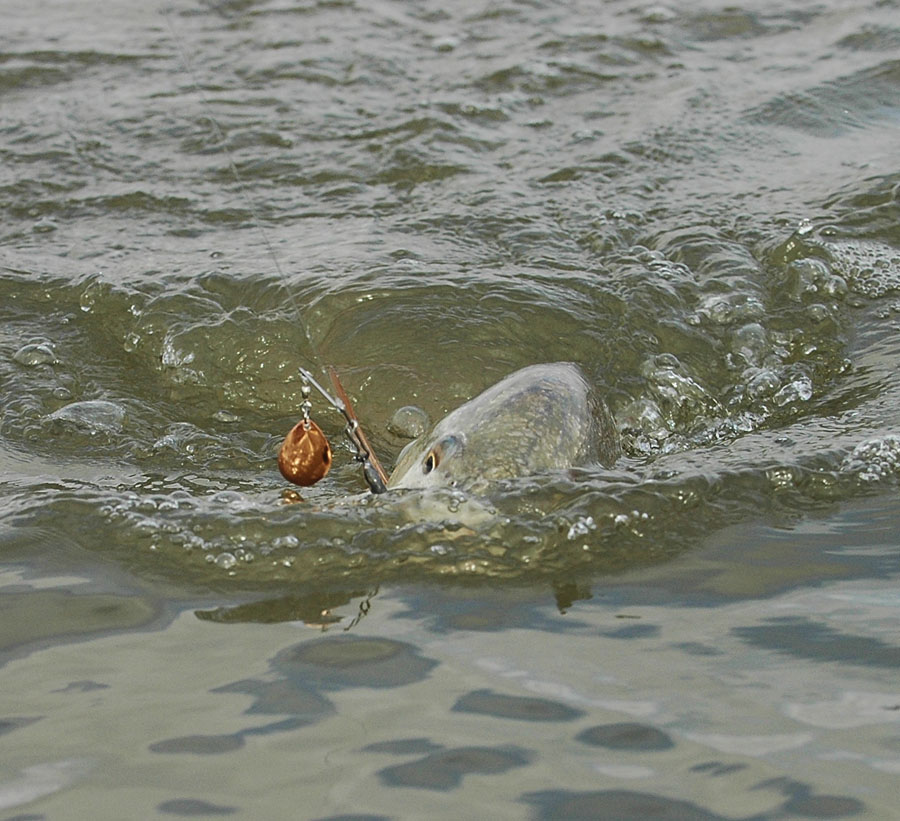 This why we fish from kayaks!
Sitting down to write, I first perused an internet fishing site and happened upon a tale relating the rescue of a kayaker. The young man made several mistakes that most experienced kayakers would avoid and I started to waive it off. Then it occurred how many newbies join our ranks every day and I realized not everyone has had the good fortune to grow up learning to respect the awesome power of the Gulf and its bays. All it takes is inexperience matched with the wrong conditions to turn a fun adventure into tragedy. With the summer season staring us in the face I figured this was probably a good time to touch on the subject.

The young man ventured into San Luis Pass in a kayak without a PFD. I don't know him, but I'm sure he'd heard San Luis is a great place to fish. What he perhaps didn't know is that this is one of the most dangerous places on our coast. On a calm day it looks benign and alluring. Yet below the surface is an ever-changing river that floods and drains a tremendous amount of water on every tide. It is a relatively narrow pass servicing several large satellite bays. If you look at an aerial photo you can easily see how the pass acts as a funnel for Galveston's West Bay, Bastrop, Christmas and Chocolate along with thousands of acres of marsh. Imagine how many gallons must pass through to change the water level one foot in just a few hours.

On the day in question, March 25th, the pass was anything but calm and benign. The wind was blowing hard from southeast and the tide was moving the opposite direction. I've seen this pass under such conditions and there isn't a fish in the world that would get me off the sand. Yet for whatever reason this young man set forth. His day ended with a rescue ride on the back of a PWC thanks to an alert bystander and quick actions of the Jamaica Beach Fire Department. It could have been much worse.

While San Luis Pass has a reputation for danger, it doesn't take a large pass with huge natural forces to wreck your day. When you're paddling a small piece of plastic all it takes is a sudden weather change, a rouge wave or even a simple moment of inattention to put you in the water. Danger can also come in the form of a boater who doesn't see you, a misguided hook, or any number of things that are no big deal on dry ground yet become a real problem when you're on the water far away from the truck.

I don't want to sound as if this is an inherently dangerous sport. Overall, kayaking is pretty safe so long as you are well prepared and pay attention to the weather and what is going on around you. Being prepared means having at least a basic knowledge of the area and its potential dangers, as in the case of San Luis Pass. It also means knowing the weather forecast before you launch and having the proper equipment to get yourself out of a jam.

First and foremost is a solid, seaworthy kayak. I was recently out with a fella who had a leaky kayak. A little water in the kayak is no big deal, but after a few hours his kayak was holding several gallons. Sloshing water makes a kayak extremely unstable, not to mention a bear to paddle. Luckily we were in the marsh and were able to get out on an island to drain it before heading back across open water to the launch. And there doesn't have to be a leak. I've seen more than one kayaker get into trouble by forgetting to screw in their drain plug.

Next on the list is a properly fitting PFD. There are plenty on the market designed for paddling. Look for one with plenty of room around the shoulders and armpits so you won't get rubbed raw. Another feature I insist on is the lower back cut away. This makes sitting against the backrest much more comfortable.

There is much debate on the wearing of PFDs. Some insist you should wear one every minute you're in a kayak, others feel that as long as it's on the kayak everything's good. I'll likely ruffle a few feathers but I fall somewhere in the middle. I've been on the water a long time and feel very confident in my abilities. I don't wear it when I'm in shallow and familiar water. If I'm in deeper or unfamiliar waters I've got it on. I also wear it when fishing near boat lanes or feel the least bit uncomfortable about the conditions. The law states that you must have a PFD and it must be readily accessible.

While a PFD will keep you afloat, it is no guarantee you'll survive an unexpected dunking. Being in the water for an extended period can cause hypothermia, even in relatively warm water. Prolonged submersion in water as warm as 79F can lead to hypothermia. Water in the 50F range can cause death in less than an hour. Given this, it is very important to learn to perform a deep-water re-entry. There are plenty of articles and videos available showing various techniques. Learn this and practice it.

Being seen and or heard is extremely important. First off it can help you avoid getting run over by a boat. The law states that manually driven vessels shall exhibit at least one bright light, visible all around the horizon from sunset to sunrise and during restricted visibility. The light must be visible at a distance of two miles on a clear dark night. One of the most popular lights used by kayakers doesn't actually meet these criteria because it isn't tall enough. If the light being displayed is not higher than your head it can't be seen "all around." You might want to check your set-up.

Many are not aware that all vessels, including kayaks, must have a whistle, horn or sound signaling device. The USCG also requires manually propelled boats operating between sunset and sunrise on open waters to carry three night signaling devices, handheld or aerial flares. The bays on the Texas coast are not considered "open waters" but it's something to think about if you are venturing off the beachfront and not a bad idea to keep handy if you fish anywhere at night.

I recently began using the Visicarbon Pro kayak light from YakAttack. Not only does it place a very bright light above my head, it also has an orange flag and a ring of reflective tape at the base of the light. It can easily be seen day or night. The designer is obviously a kayak fisherman who put a lot of thought into building it. The unit floats, can be inserted into a typical rod holder, and folds for easy storage.

Beyond these, you can also chose a brightly colored kayak and wear brightly colored clothing. I've been on the water in all weathers, day and night. On a sunny day it doesn't matter so much, but in sketchy conditions dark or neutral colors tend to blend into the surroundings. Even if you aren't concerned about boat traffic, in the event you should require assistance it sure is nice to have a fourteen foot piece of orange plastic for a signaling device.

Some other safety gear you may want to consider would include a well-stocked first aid kit. This sport is full of things that can cut, scrape or poke and saltwater is known to harbor some nasty bugs. Having the ability to thoroughly cleanse and patch a wound is a good idea. My kit also includes a product from Texas Tackle Factory for treating stingray hits. It comes with tweezers for removing pieces of barb, hydrogen peroxide, antibiotic and bandages. It also has a heat pack. Having been the unfortunate recipient of a well-placed barb I can tell you nothing feels better than heat placed directly over the wound. The kit doesn't replace seeking medical attention, but it is certainly a better option than allowing time to elapse without proper first aid.

All of the above are the bare minimums everyone should consider, but there are many other items you could add to the list. Side-cutter pliers capable of cutting the shank of a hook, a good knife, a sturdy tow rope, a waterproof VHF, something to start a fire, a dry change of clothes in a waterproof bagyou get the idea. Not everyone needs to carry a full arsenal all the time. If you are in shallow, protected water and never leave sight of the truck you don't need the same equipment as the guy venturing across the bay on an overnighter. Use your head, consider the possibilities and have a plan. Be safe out there, I don't want you to be the next one I read about.