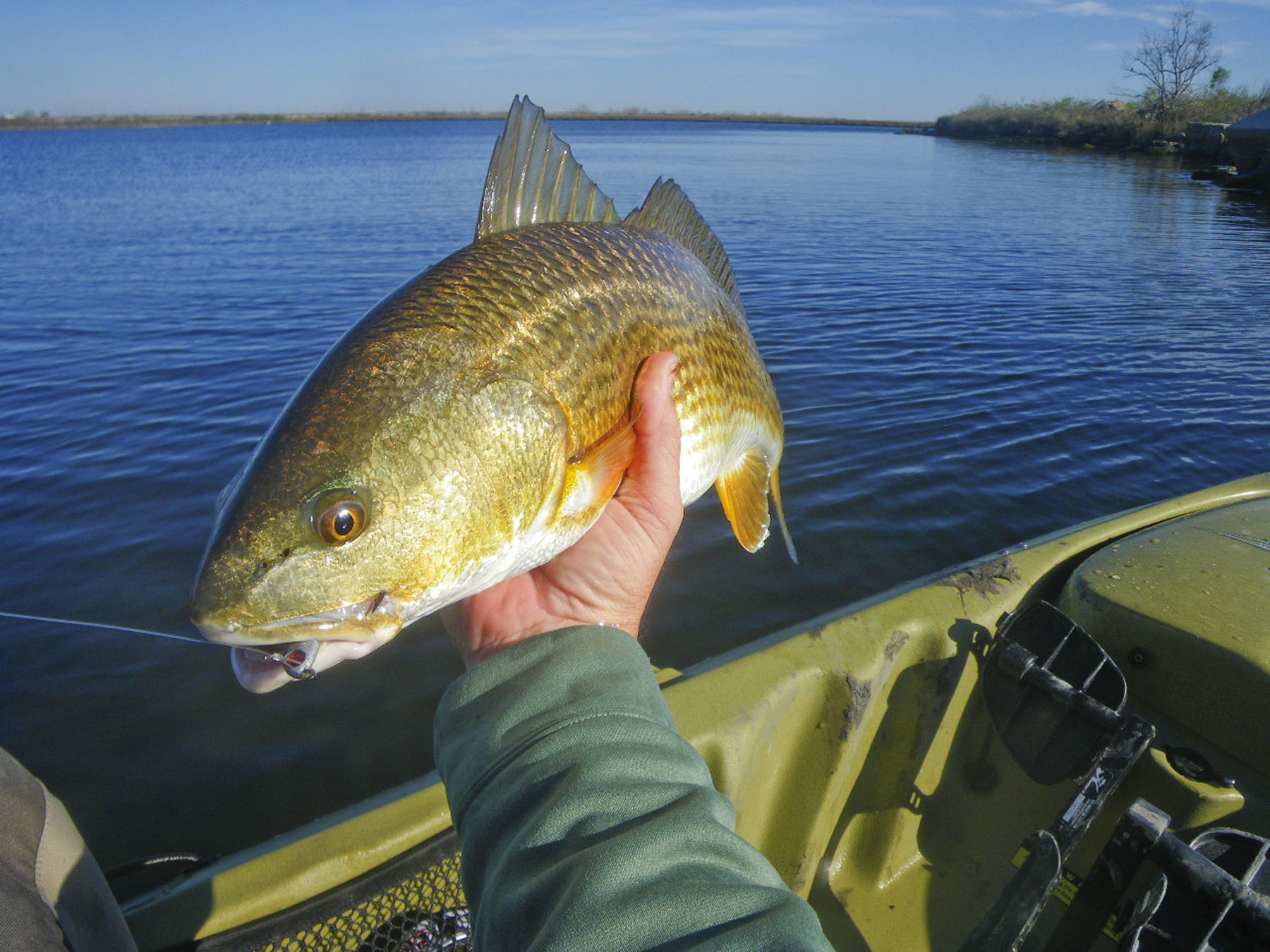 Hopefully by the time you read this we'll be well on our way into the spring warm-up, but right now I'm holed-up in the house tying flies and nervously watching the water temps fall all along the coast. Having been around this block a few times I sure hate to think that we're going to suffer through times like we had after the last deep freezes. All we can do at this point in time is hope and pray that the trout and reds got wind of the front and scurried to some deep water refuge.

Well enough of the doom and gloom, I've got a new kayak to look forward to using once this weather breaks. I've been sampling boats from the Hobie line-up over the last couple of months, taking the rental boats from the fleet at Fishing Tackle Unlimited. The common advice to all new kayak buyers is to always try before you buy and I'm taking that oft dispensed advice to heart.

I want a kayak that is versatile enough to cover a lot of different situations. My traveling and love for sampling all that Texas has to offer means that I might be on a shallow grassy flat, way back in the marsh or perhaps a mile or two off the beach chasing kings. In the past I've kept a stable of yaks, each with a specific purpose to cover a certain situation. I'm now trying hard to simplify. We'll see how long that lasts, but for now I think I've located the right boat for my needs. I figured I'd let you guys in on the process to see how I've arrived at my decision and hopefully give some insight into a few kayaks you might want to water test for yourself.

I started off with the latest offering, the Pro Angler. Hobie considers this more of a small boat than a kayak, but it is sort of a hybrid between a sit-on-top kayak and a one-man boat. Very cool concept. It certainly has its uses and I really enjoyed my time in it. On the plus side it has a ton of storage. A guy who likes to bring along a good bit of gear would absolutely love this thing. On this day I had plans for bringing home a few fish for dinner so I put a 20lb bag of ice in the tub under the front hatch along with several drinks. There was still plenty of room for my limit of mid-slot reds. I likely could have added in a few trout, but I had redfish on the half-shell stuck in my head. It is a super wide kayak coming in at 38 inches which makes it a super stable platform for standing and sight-casting on the flats. I really liked being able to pole around without fear of falling. And by the way, the seat is awesome. If you have issues sitting in the typical kayak seat due to back problems or just plain advancing age you might want to give this a try. The downside for me was in getting where I like to go. It is set up with the Mirage Drive which works great in deeper water, but once I reached the back lakes I had to pull the fins up. That left me with two options, paddle or pole. Well to be honest, it isn't exactly built for easy paddling and covering large areas of shallow marsh by poling doesn't always mesh with the plan. I can certainly see where guys fishing the open bay or beachfront could really use this boat. And those who chase bass would love it. I'd love to have one for those situations, but unfortunately that wouldn't fit into my simplification scheme.

I went the complete opposite direction with the next test. I picked up the smallest of their options for fishing, a Hobie Outback. I knew that this was a fairly popular model along the Texas coast and figured it was worth a shot. This one is a touch over 12 feet and 33" wide. The short length makes it good for maneuvering and the extra width gives it great stability. I could easily stand up and fish which is a big deal for me as I really enjoy sight-casting. The added height allows for better visibility into the water. The downside for me with this one was the deeper seating area and higher sides. I like to sit sideways while drift fishing and that wasn't really comfortable. If you only did this occasionally then I'd advise giving this one a look, but I probably spend as much time sitting sideways as I do facing forward so that was a deal breaker. I also knew that I really wanted a longer boat for crossing open water.

The next trip was going to involve crossing a good deal of open water to reach a marsh area. For this I chose their longest kayak, the Adventure. I've always liked the longer, touring-style sit-on-tops having paddled a Tarpon 160 for many years. The Adventure is a smooth running boat that tracks like an arrow. I would expect that from a 16' boat with a width of 27.5", but what I hadn't expected was the speed I could get using the Mirage Drive. I didn't bring a GPS that day so I can't give you the exact data, but I know I was moving faster than any paddling I've ever done. It just slices through the water. Once I got in the area, I folded up the fins and picked up the paddle. It was just as nice to paddle as it was to peddle. Sitting sideways was very comfortable, but standing up to fish wasn't really an option. No real surprise given the narrow beam.

So... too big, too small and too narrow. On to the kayak I had in mind when all of this started, the Revolution. At 13.5' length and a width of 28.5" I figured this kayak would do most everything I need. After spending an afternoon on the water paddling, peddling and fishing I was convinced that this was what I was looking for. The day was windy and I crossed some open water to see how it would handle. The tracking was good and it rode over the waves without drenching me. The speed using the Mirage Drive wasn't quite as fast as in the Adventure, but still faster than paddling in other kayaks. Paddling and maneuvering the boat was about what I would expect in a boat of this length. Sitting sideways was comfortable and the stability was solid. I could stand up in the calm water of the marsh and although it wasn't as easy as the wider boats, I'm pretty confident I can use it this way when needed. I really like this kayak as an all-around fishing platform. It probably didn't hurt my opinion on the boat when I found a bunch of reds on the feed just prior to this cold front. Ten solid fish in a short afternoon trip will do that.

The Revolution is a good all-around kayak that may not be the absolutely perfect boat for every type of fishing I like to do, but no single kayak could be. When looking for a kayak you need to understand that every kayak is a compromise on some level. You can't have the ultimate in speed and stability in the same boat. For my uses the Revolution has plenty of speed for covering a lot of water, enough stability to stand up or feel quite comfortable fishing far from the beach and it's comfortable enough to fish all day. If I could have two boats I'd likely choose the Adventure and the Pro Angler, the two boats at the far ends of Hobie's offerings. But that isn't what I set out to do. I want a kayak that I can throw in the bed of the truck and head down the coast on a week-long exploring trip and know that it'll cover all the bases.

Now my only fear is whether there will still be plenty of fish out there to slime the new kayak when this cold snap breaks.