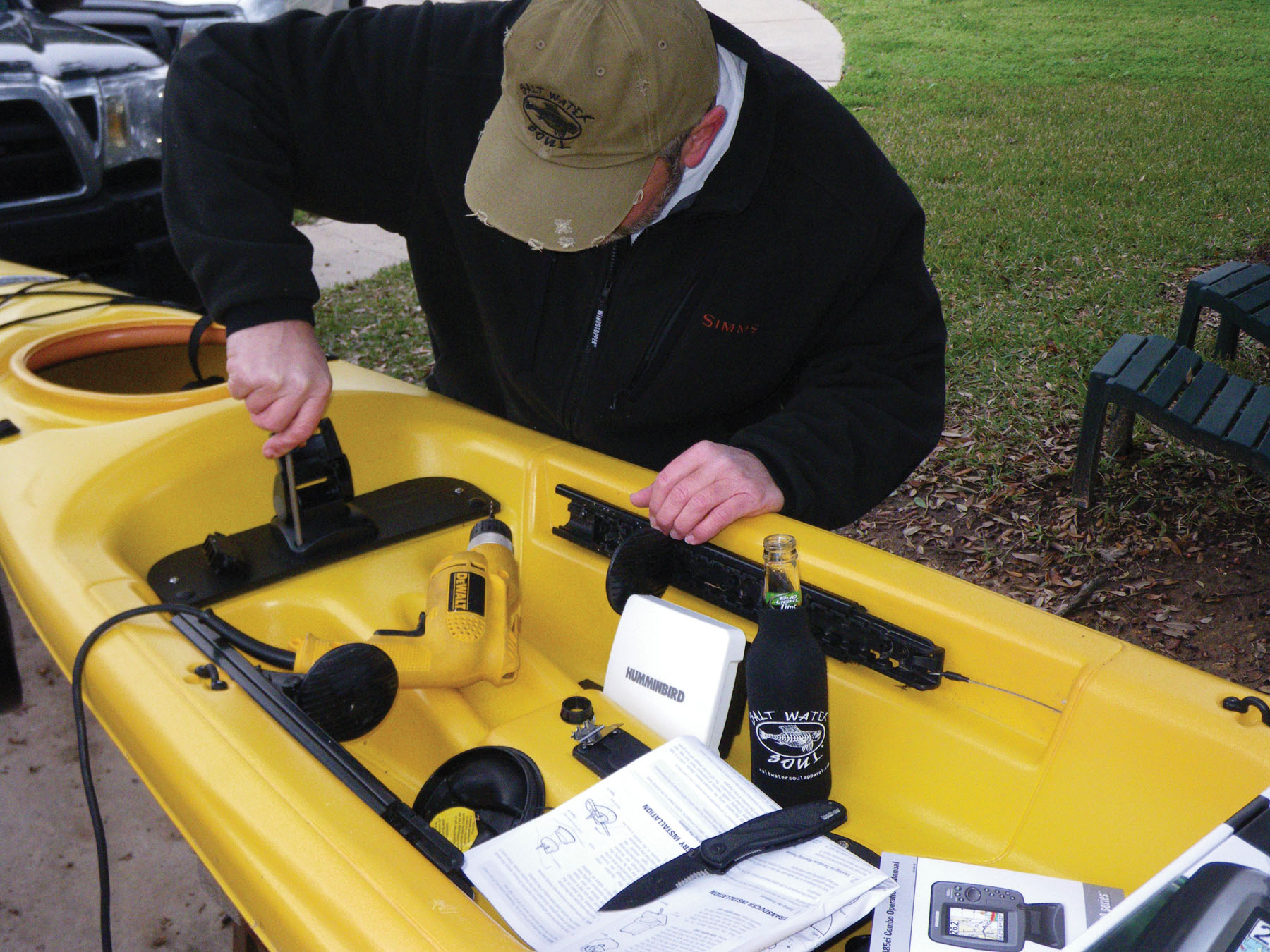 Like most outdoorsmen, I like new toys. Over the dreary winter months I managed to collect a couple things that I've been itching to try out. Between hunting season, weather and work, the windows for fishing have been pretty scarce but, with a story deadline looming and predicted brief break in the weather, it was time. Before I could hit the water, though, I needed to get the new kayak rigged up with the new GPS/Fishfinder combo.

The kayak is the new Elite Series Strike 150 from Pelican. Yes, I said Pelican. In the past they've had a reputation among serious kayak fishermen as "starter" boats and experienced anglers often discouraged newbies from going in that direction. And with many of their previous models they were probably correct. Most of their sit-on-tops were designed more for general recreation and didn't paddle all that well and they had stability issues. However, all that changed when Kelley Woolsey came on board. Kelley was at the helm of Wilderness Systems when the kayak fishing craze took off and he understands what kayak fishermen want.

The new Pelicans are made of thicker plastic and have a better "feel" than previous offerings. The upper deck has been designed with a comfortable cockpit and large tankwell. It also comes standard with rudder, oversized footpegs, two flush mount rod holders and a Scotty rod holder in the forward cockpit. They've also placed a convenient console area at the front of the cockpit for mounting accessories such as my new Hummingbird 385ci Combo Kayak unit.

This little jewel is a combination GPS and sonar with an installation kit specifically designed for kayaks. It comes with everything you need to get on the water including a small 12-volt battery and charger. I was able to complete the installation in about an hour with minimal fuss. The transducer is mounted inside the hull using a small rubber dam that is glued to the hull and then filled with a special marine grease. The transducer unit is then seated into the grease and secured with a hook and loop strap. Once that step is complete it is simply a matter of securing the unit base and running the wiring. The unit itself snaps into place on the base and is easily removable for transport. They even included a soft plastic boot to cover and protect the connections when the unit is not installed. The battery is stored inside a waterproof roll-top bag supplied with the kit. I went a step further and mounted a foam block to the inside the hull with a cut-out area to seat the battery and keep it from sliding around.

With all of the work completed I headed out to one of my favorite cold-weather spots. It is protected from most winds, has deep water with structure and, best of all, it is only accessible via kayak. I've been fishing this place for several years and I've got a pretty good handle on it, but I've always wanted to know exactly what was down there and see if there was anything I was missing. I figured this was a great place to give the new fishfinder a workout.

I started out by paddling some fairly shallow water where I could see the bottom to get a feel for how the unit would respond. When crossing hard sand I got a moderately wide and bright yellow/orange reading. Soft mud produced a thicker blue line. Scattered shell in the mud showed as yellow dots while a slab of concrete was a thin red/orange line. Most of my kayak fishing is in shallow marshes searching for reds so I've never really been a big advocate of sonars on kayaks, but I think I'm changing my mind. This thing is cool.

I spent the next hour just cruising around checking out the bottom. There are places in there where I can almost always count on picking up a couple fish. And while I had a pretty good idea, I never knew exactly why these areas were so productive. Now I have a picture of all the fish-holding structure, drop-offs and holes. And as a bonus I even marked a few fish along the way. Awesome.

Once my curiosity was satisfied I settled into fishing mode and started targeting the specific structure that was holding fish-concrete rubble in 6 to 8 feet of water. Forty-five minutes later I was starting to doubt my strategy and the cold north wind was making me wonder if this was such a good idea. A change to a 6 inch paddletail Bass Assassin in red shad crawled along the bottom was the ticket. Within a few casts I got a solid thump which resulted in a swing and a miss. The follow-up cast drew another bump and a hook-up. The deep water red gave me a good sleigh ride and several hard dives before giving up. I'm always amazed at how hard redfish can pull in fifty degree water. The bite was on for the next hour and a half giving me several more reds before they shut down.

I was totally satisfied with the "fishability" of the new kayak. It is a bit tippy on initial stability, but has solid secondary stability. I never felt the least bit uncomfortable turning around to access gear in the tankwell or reaching out to land a fish. It also drifted quite well at a slight angle and didn't pivot back and forth. Once I decided that the fish were done playing I went about running the kayak through some serious paddling to check out the hull design. Using the GPS I found that I could comfortably maintain a 3.8 to 4 mph pace, in a sprint I pushed it as high as 5.2. Once I stopped paddling the boat would glide nicely. The kayak tracked extremely well without using the rudder. It also responded well to turning sweep strokes. Overall I'd say the performance was pretty close to my Tarpon 160.

While having success in my deeper winter spot was fun, hopefully by the time you read this we'll be well on our way into spring and some shallow water sightcasting. And while that will always be my preferred mode of fishing, I'll be watching the new Hummingbird as I travel looking for some hidden gems for next winter.