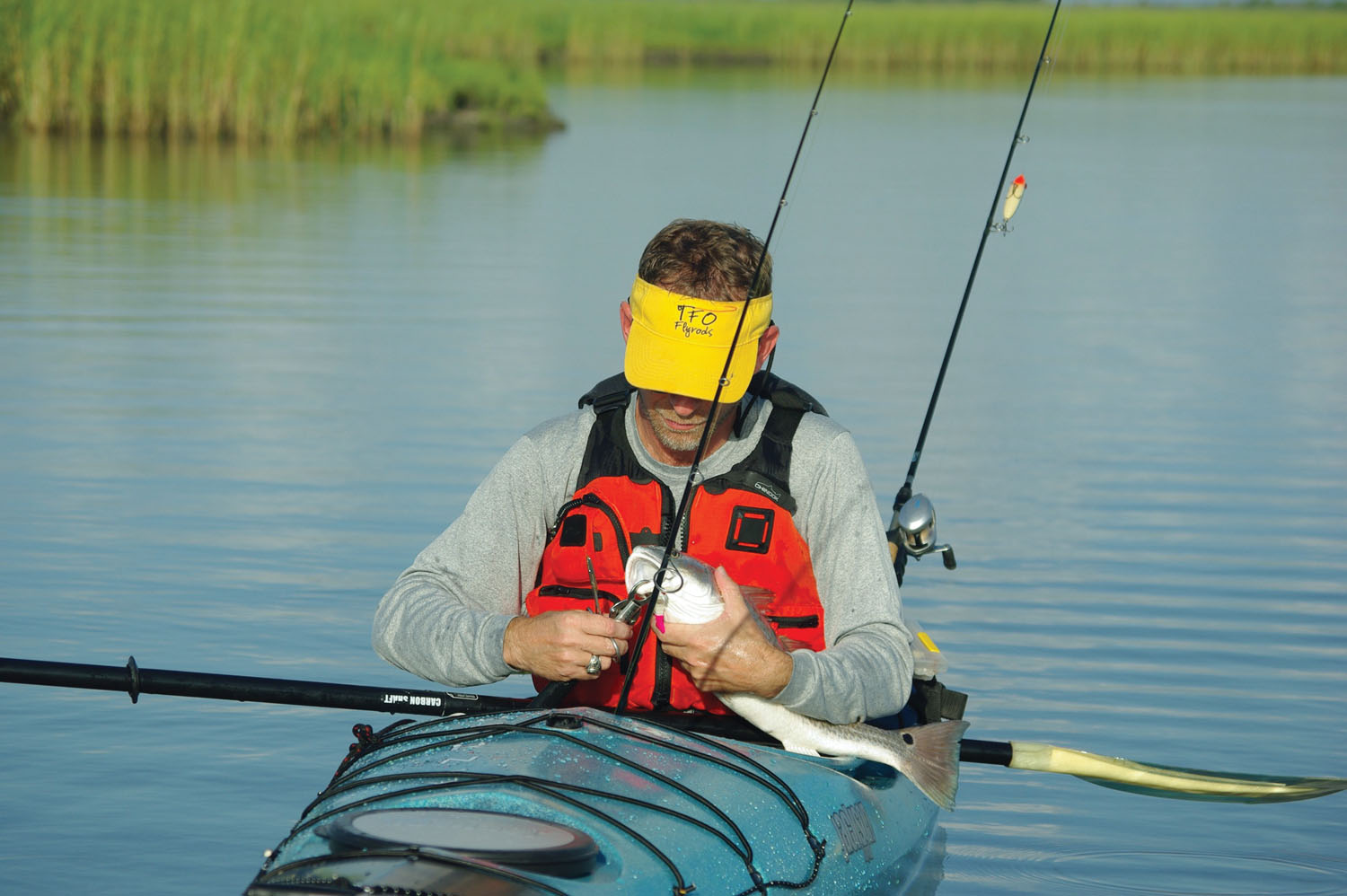 The PFD designed specifically for kayaking is the paddling angler’s most important piece of equipment. (Photo credit Jeff Herman)

I sat down with full intentions of writing a happy fishing piece. Then as often happens with writers, I got distracted and decided to check in on some buddies via social media. They were fishing and I wasn't. While surfing through photos of fish held by grinning anglers, I ran across something that completely changed my mood.

Somewhere out there right now is a young twenty-year-old who fell off his kayak. An extensive search is underway and has been going on more than 24 hours. I hope he's okay but as the hours drag on, people who do this kind of stuff as part of their job will tell you it becomes more of a recovery mission than a rescue. Details are still sketchy but it is clear he and a friend went fishing in some questionable weather. A strong front was blowing in and they had to paddle back to their launch against the wind. The young man flipped and then became separated from his buddy. The friend made it back. So far they have found his kayak and PFD, which he apparently was not wearing.

It seems as though I'm hearing of these incidents more and more. A quick Google search of "missing kayaker" news stories results in several pages of entries. Reading through them, there is a fairly common theme. Most will make mention of inexperience and/or bad weather. But every single one I read noted that the deceased had not been wearing a PFD. Interestingly, most mentioned locating the kayak and PFD prior to recovering the body.

So the PFD is there, it just isn't being worn. Now I'll be the first to admit that I don't always wear one while kayaking. If I'm in my usual six to twelve inches of water and the weather is good, I feel pretty good about my welfare. I know I'll catch flak for that from a few folks, but it is what it is. However, if I'm in unfamiliar water, sketchy weather or around a lot of boat traffic, the PFD is on and cinched tight.

I often launch my skiff out of Louis' Bait Camp at Bayou Vista. This has become a very popular kayak launch over the last few years and what I see as I idle down the bayou towards the bay makes me cringe. Overloaded kayaks, no lights before dawn, and very few anglers wearing their PFD. Hell, most of the time I don't even see one within quick reach. I'm assuming they're stored inside the hatch, but I'm sure that there are more than a few that don't even have one onboard. This is a busy waterway with all manner of boats and jet skis running through it. Yes, it bothers me.

Beyond stressing the PFD point, heading out with a small craft advisory in effect doesn't make you cool. You are in a little-bitty plastic boat. And, with all of the weather information we have available these days, there is little reason to get caught out in bad weather.

I know it's your only day off and you really want to go fishing in your favorite spot, but it just isn't worth it. If you must fish, have a Plan B or even C. Find someplace protected and preferably enclosed to some degree, a marsh lake or something similar. A protected shoreline is okay, but if something should happen you're looking at being blown into the open bay. It doesn't take long for that scenario to turn ugly.

With the growth in kayak fishing, there are always newbies coming into the sport. As noted previously, inexperience is often mentioned in the writings of these tragedies. If you are new and unsure of your abilities, try to find a more experienced friend to go with. The Texas Kayak Fisherman internet forum is full of guys all up and down the coast, willing to let a rookie tag along. There are also a number of kayak guides you can hire to shorten the learning curve.

If you are determined to figure it out on your own, spend some time in protected shallow areas until you become familiar with your new boat. Consider not carrying fishing tackle the first trip or two and concentrate on learning what you can and can't do in your kayak. Lean it over to the tipping point. Turn around in your seat as if grabbing something from the tankwell. Practice falling out and getting back in. Work on re-entry skills in water where you cannot touch bottom–wearing your PFD, of course. The time to learn all these things is not while you are fishing, and certainly not during inclement weather.

Kayak fishing has been popular for a good many years now and one of the biggest changes I've observed is all the "rigging" on paddle boats. Hate to sound like the crotchety old guy but when we started out there was very little excess on our kayaks. We went clean and simple. While that may not seem like a safety issue, some of this rigging bothers me.

Number one on that list would be the anchor trolley set up. I've never used one but I can certainly see where they could come in handy at times. Just be aware of getting tangled in the ropes in the event of a flip.

Sorry for the downer of a column this month but after reading about that young man and trying to imagine the fear he experienced as he was blown away from his friend and into the open bay, I really had no choice but to write my thoughts. I started kayaking about fifteen years ago and through stupidity or bad luck I found myself in a couple rough spots. Luckily I only ended up with only a bruised ego and some hard-earned experience.

I will close with one very important point: If your reason for not wearing a PFD is discomfort, you are wearing the wrong PFD. There are several manufacturers who offer PFDs designed specifically for paddling. They are much less bulky than ski vests and other general purpose devices with larger openings around the arms to allow for greater comfort and freedom of motion without binding and chaffing.

Please be safe out there and never let the macho in your head overrule the gut feeling that's trying to keep you alive.