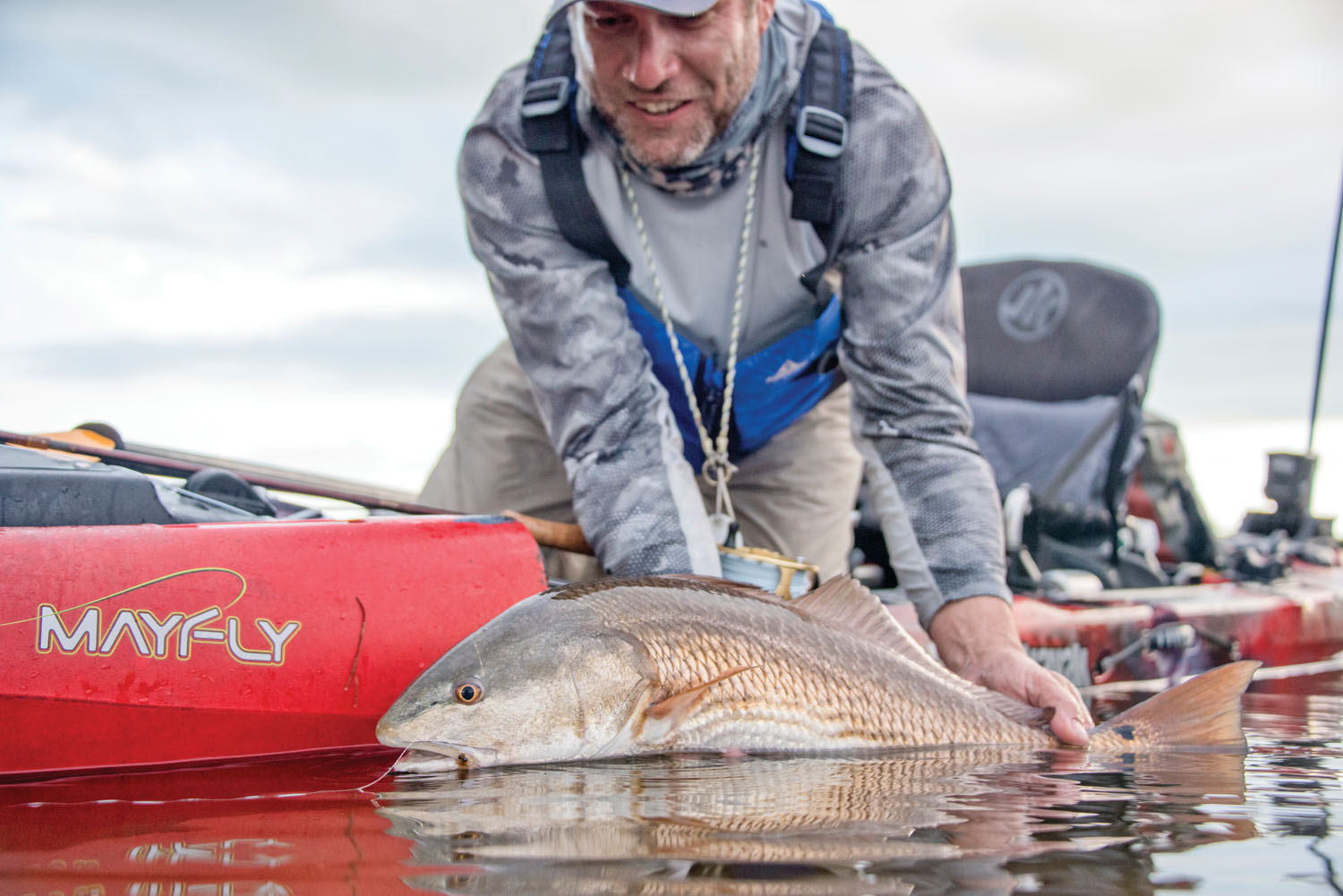 Fishing kayaks have come a long way! The stability for stand-up fishing along with ease of paddling and great tracking make the Mayfly a top choice with fly and light tackle anglers alike. Photo by JK Media House.

The first article I wrote for this magazine, about thirteen years ago, came about because I liked to stand in a kayak while sight-casting. TSFMag’s editor and I chanced to meet one day at Fishing Tackle Unlimited and we got to talking about kayak fishing. Everett was intrigued with my preference for the stand-up style while he preferred sitting down for the stealth it offered.

By the time we parted ways an idea had hatched for a pair of articles debating the virtues of each style. I understand his viewpoint and, under certain circumstances, employ the stealthy sit-down approach, but all these years later I still prefer standing in my kayak. Luckily, I’m not the only one. The popularity of this style has led to kayak manufacturers building craft specifically designed for it. Back in the day, those who wanted to stand were limited to the old Ride or the Drifter; neither of which really paddled worth a damn. Advancements in design have led to quite a few models that paddle more efficiently and offer plenty of stability.

The latest along these lines from Jackson Kayaks is the Mayfly. Not only was it designed with stability for standing, they went to great lengths to make it ideal for fly fishermen. One major issue with every other sit-on-top kayak I’ve owned were myriad fly line grabbing snags in the cockpit. I’ve tried all manner of fixes from damp towels to high-dollar line management tools draped across the cockpit and bow. Nothing really worked and it was just a matter of time before the loose line wrapped around something, causing a flawed cast or busted-off fish.

One of the worst offenders has always been the foot pegs. I’ve tried removing them but that made paddling a pain. In the end I just dealt with it and accepted it was going to cause me grief.The folks at Jackson fixed this with a single-piece foot brace that adjusts on a track in the center of the footwell. They also added a fly patch and gear tracks to the top of the brace. For the conventional angler guys who aren’t so worried about snags the gear tracks are situated perfectly to add electronics or a rod holder.

The entire footwell is perfectly flat and covered with MarineMat foam. It makes standing more comfortable as well as deadening any sounds. Even the tackle storage hatches on the sidewalls of the cockpit are flush mounted and snag-free. You can strip off as much fly line as you want into the cockpit and never worry about it hanging up. Just keep your feet off of it and you’re golden. Been there, done that – not the boat’s fault.

The bow storage hatch is pretty cool too. It’s double hinged with two heavy duty latches and has a strip of Hypalon mounted across the top so you can slide your paddle blade under it for quick and easy stowage. Along either side of the front hatch are molded-in rod tubes to protect your rod tips. They’ll accommodate a nine-foot rod with the reel tucked into molded pockets secured with a small bungee. The reel pockets are set up to also allow you to turn the rods around with the tip pointed off the stern, yet still parallel to the water, keeping them out of the way of your casts.

And as much as I like standing up to fish, the seat is really comfortable. You can set it up at a normal height for paddling longer distances or raise it a few inches once you get to your area and are just cruising around searching for fish. The seat also rides on a track which allows you to slide it forward or back to help balance the weight distribution for better paddling efficiency.As a bonus, Jackson threw in a Platypus hydration pack that attaches to the back of the seat.You can also take the seat out and replace it with Jackson’s Orion 25 or 35 cooler and secure it to track mounted tie downs. I haven’t tried this option yet, but I’ve seen some photos of guys standing atop the cooler like a poling platform. I’m pretty sure I’m still young and agile enough to pull this off. We’ll see.

I’ve never been big on adding a bunch of accessories to my kayaks, but I know it’s the “in” thing to do. Cameras, rod holders, safety flags, electronics, etc., are common add-ons these days.While this boat was aimed at fly fishermen, the conventional guys and gear junkies can easily mount whatever they want on the aluminum gear tracks spaced out all along the perimeter of the boat. They even molded in a spot on the stern to accept a Power-Pole Micro Anchor.

When I first got my hands on the Mayfly I was pleased with all of the thought and attention to detail that went into making it a fly fishing kayak. There was no doubt that some real fly guys had been consulted. It was also obvious from looking at the hull design that it would be plenty stable for standing. My only concern was how it would paddle. In the past I’ve kept a variety of kayaks to cover what I wanted to do on that particular day. I’d compromise stability for some length and speed if I needed to cover a good bit of water or I’d pick out a stable barge when I could fish closer to the launch and standing up was more important. That compromise is always a battle.

I was pleasantly surprised with the Mayfly’s paddling characteristics. At 12’8” it tracks really well without a lot of side to side wobble, even when paddling fairly aggressively. While standing up it still tracked fairly straight whether easing along with the paddle or poling. The boat glides well when you stop paddling with a smooth, gradual decrease in speed. The lower sides reduce sail effect while drifting or paddling with a crosswind. I’ve only had it out a couple times, but overall, I’m very happy with it and feel like I can aim for a distant marsh without dreading the long paddle back.

I’ve been around this kayak business for a long time and still would not say that any one kayak is perfect for every kayak fisherman and/or fishing application. There are simply too many variables and preferences. But if you like to stand while fishing or are an ardent fly guy, you owe it to yourself to give the Mayfly a serious look.