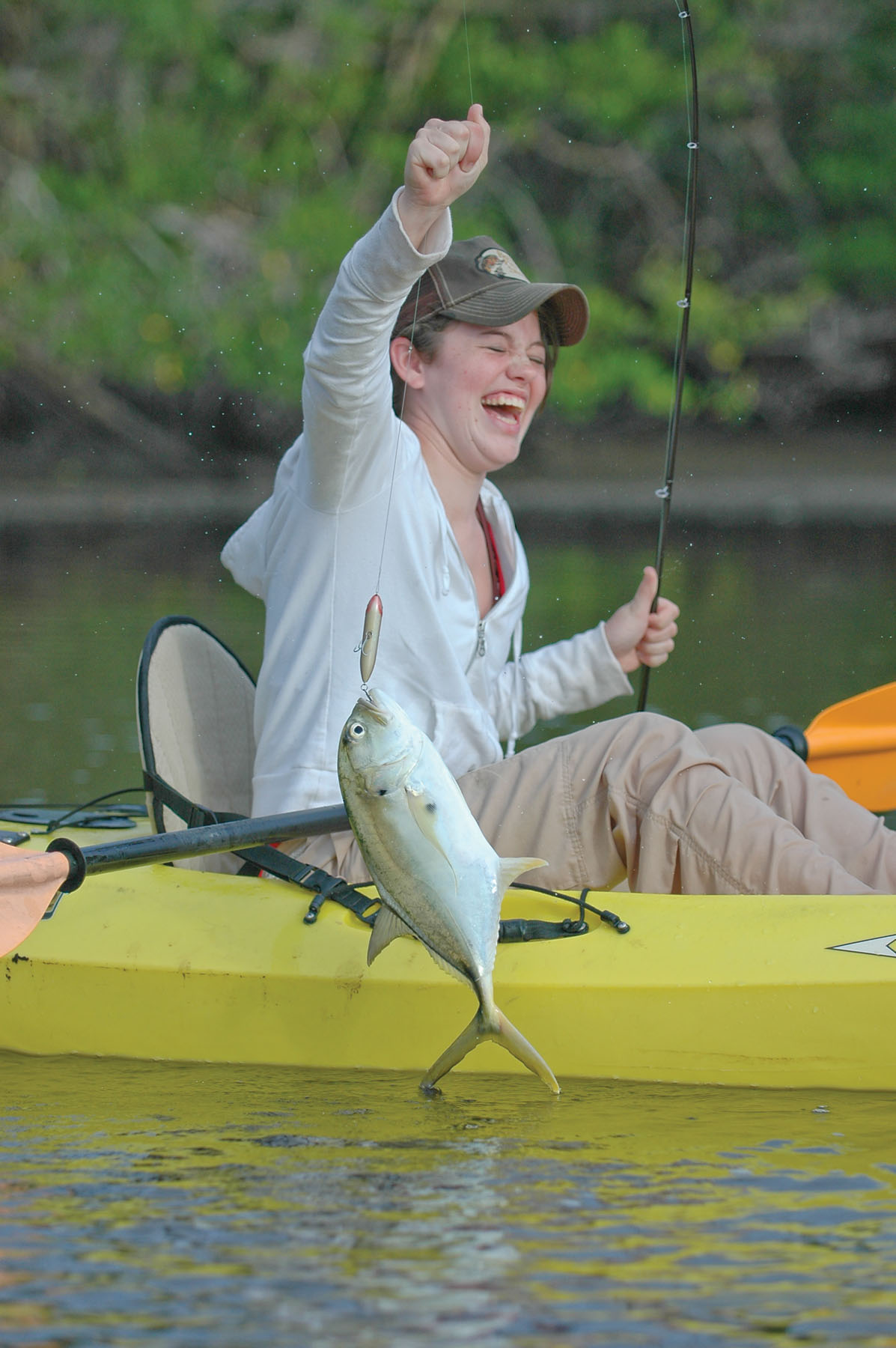 Randi Null, author’s oldest daughter, landed a small jackfish after quite a struggle.

School is out and the summer season is upon us. It's time to turn off the X-Box and get those kiddos outside. Take a kid fishing is more than just a slogan, it is an important thing to do for many reasons. Most of us with a lifelong passion for fishing started as youngsters fishing with a parent, grandparent or possibly another family member. I was lucky to have all the above. Some had no passion of their own but were kind enough to indulge mine.

Some of my fondest memories are of riding the dirt roads of central Texas with my Grandpa after he got off from a long day of work. He worked cattle for several area ranchers and had access to their places. We'd pull up to a stock tank, run a quick moccasin patrol, and then he'd settle into a lawn chair while I fished... and fished... and fished. I never really thought about it then, but looking back I've come to realize he didn't care one bit about fishing. He simply cared about me.

Grandpa left us a good many years ago, but those memories are as fresh as if they happened only yesterday. How awesome would it be to have someone thinking fondly of the things you did for them long after you're gone? You have that opportunity. Whether with kids of your own, nieces, nephews, grandkids or just the youngster next door whose parents are too busy; I'm certain there is a potential young angler just waiting for a chance to wet a line.

My baby girls aren't so little anymore. In fact, the youngest just graduated and the eldest is on her way to becoming a teacher. Both of them love to hunt, fish and spend time outdoors. Earlier today Randi put a smile on my face as she buzzed through the kitchen between school and work and stopped long enough to ask, "With the new boat coming, can I expect to get in a few more days fishing this summer?" Well of course you can. Over the years some of the best conversations I've had with the girls has been while out on the water, sitting in a deer blind or riding in the truck on the way to some great adventure. The best way to get to know what's going on in their young heads is to take them away from the everyday mayhem and relax a while.

Relax is the key word. Don't put too much emphasis on the catch. We all enjoy pursuing the glamorous trout and redfish, the bigger the better. But for a kid starting out it's all about the pull. Who among us doesn't fondly recall watching a red and white bobber sliding slowly sideways and going under? Or the tap-tap-tap on the line as some unknown fish showed interest in the dead shrimp impaled on the hook? It didn't matter if it was a piggy perch or hardhead, it was all about the pull.

The coolest part of saltwater fishing is the potential variety available when you toss a line baited with a dead shrimp. Most everything out there eats shrimp. Keep it simple and fun starting out. If they enjoy those first outings there will be plenty of time to kick it up a notch. Pushing them too fast involves the possibility they'll get bored and not catch the fishing bug!

I've found that kayak fishing is a great way to get youngsters involved. Little ones easily fit in the tank; well, while the older kids can join you in a tandem or even paddle their own kayak. I can't say what will work for your kids, but mine were capable of paddling on their own by the time they were twelve. The initial outings might be best planned without fishing gear and in protected water. Let them get a feel for paddling and just being out there. Spend some time paddling a marsh or creek. Make it about seeing what's out there and not so much of a paddling lesson. I've found that paddling comes naturally to most kids. A few pointers on how to make the kayak go forward and turn should suffice in the beginning. Keep in mind that while the things we see every day on the water can become mundane for us, poking at crabs or watching a heron stalk minnows might be just the thing to flip the switch on a lifetime in the outdoors for your kid.

Safety first! Get them into a properly fitting and comfortable PFD. If they aren't comfortable around the water it might be a good idea to get them in a pool wearing the PFD to show them how it works. Let them play around on the kayak to see just how stable they really are. A lightweight kid will just about have to jump in the water on purpose in a typical sit-on-top style. Anything you can do to lessen their anxiety will make it easier for them to enjoy it.

You know your child better than anybody so base your first outing on that knowledge. Don't plan an extended day if you know they can't handle it. Several short, fun trips are worth far more than one long and potentially boring session. As they get older and show interest you can increase the duration. All of this might sound like common sense, but I've seen gung-ho parents push their kiddos too far and end up taking all of the fun out of it. What constitutes a good day on the water for the avid kayak fisherman probably isn't going to be the same for a youngster.

Pre-trip planning is as important as the actual trip. Make sure they have proper clothing, footwear and sunscreen. Pack plenty of drinks and snacks. An uncomfortable, thirsty or hungry kid will not enjoy the outing. I can easily go all day on a protein bar and bottled water; my girls cannot.

Like I stated earlier, kids just want something tugging on their line. Find a place with some decent water movement, park it and drop a dead shrimp on the bottom. Something will come along and eat it. Keep the gear simple but don't go cheap. The Snoopy rigs are cute but don't fall for it. Nothing spoils the trip like a balky reel that quits working after a couple hours. There are decent quality closed-faced spinning reels available. Pony up and get them something that will last. There are also decent quality kid's rods that will work just fine for most anything they're likely to hook. Once I realized my girls were ready I shortened a couple quality popping rods and installed smaller handles that fit their hands. Another tip is to have them practice casting before going fishing. I made a game out of it with buckets in the yard. Having them familiar with their gear and mechanics of casting made things go a lot smoother.

Data shows that the demographics of fishermen is slowly aging. The future of the sport depends on recruitment of young anglers. It's time for all of to step up and - Take a Kid Fishing!