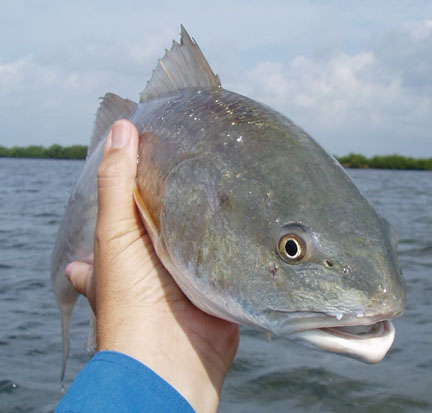 Remain flexible. I've always tried to fish with that as my motto. Sometimes I listen to myself better than others. There are days when I stick with a topwater way too long. Other times I get overly enthralled with a particular area or style of fishing even though the conditions would dictate a change. If everything is right, my favorite kind of fishing has got to be sight-casting to redfish in clear water with a small topwater. I love to watch them react and go from calmly cruising along to fired-up aggressive predators bent on destroying my lure. Luckily my wife shares that passion and will stick with me on that quest even when it isn't working. But sometimes enough is enough and she's ready to just catch a dadgum fish.

Our recent foray to the flats around Seadrift looked perfect on paper. Somehow we managed to put together three open days on both our calendars. The long-range weather forecast was looking good, the major feeding times were doable and the tides were going to be moving. Of course we arrived at the coast to find the weatherman was slightly off with his wind forecast. No big deal, I always figure on adding 10 mph to the forecast anyway.

We launched out of Charlie's and hung a left through the cut to hit one of my favorite springtime areas. I can always count on finding some tailing and cruising reds somewhere in the Lagoon. We hadn't been chunking our lures for more than a few minutes when my topwater disappeared. I reared back into a solid pull. Yep, they're here and this one feels pretty solid. And yes, I did a little trash talking but, in my defense, most foul-hooked mini-reds do feel pretty good. That was about the highlight of the day for me. We tried it all; spending time on the protected shoreline, the windy shoreline, the secluded back lakes and even drifting aimlessly across the deeper grass. In all of that I think we counted maybe three confirmed sightings of redfish to go with a couple rats that fell for Camille's soft plastic offering. They simply weren't home. No problem, we've got two more days.

The second morning we awoke to palm trees rattling in the now howling wind. Undaunted, we headed out of Charlie's and hung a right this time. Different area, same results. I think Camille managed three little guys and one mystery fish that broke her off. They had obviously not gotten the memo about vacating the flats, but every other fish had. I don't think I can recall a time when there was so little life in this area. I floated over a bunch of acres without seeing a crab, pinfish or even a shrimp. Well I ain't the sharpest knife in the drawer, but I can take a hint. If these reds wouldn't act like a dignified clear water flats fish, it was time to try something new.

We headed back to Charlie's and went a little ways down the ICW, partly to duck out of the wind that was nearing the ridiculous level and to try our luck Galveston style. I say Galveston style because the water in the ICW was less than inspiring. We started throwing flashy lures in the off-color deeper water. And we started catching fish. It wasn't exactly fast and furious, but it felt pretty good to be getting bit consistently. Camille and her spoon put a whuppin' on me and my spinnerbait by bouncing the spoon off of the rip-rap and into the narrow gut running parallel to the structure. However, I did manage to salvage some dignity by pulling the biggest fish of the day out of the deeper water at the drop-off.

Day three there wasn't even any serious discussion about where we were headed. While patrolling the edges of the big ditch isn't the same as sniping a big red in gin clear water, it sure beats the hell out of getting blown across an empty grass flat. The reds were still there and willing to eat. I learned my lesson and followed Camille's lead in bouncing my spinnerbaits off the rocks into that little gut. It wasn't glamorous, but it worked for a quick limit of fresh grilling reds.

Should you decide to give this type of fishing a try please be mindful of the barge traffic. A fully loaded barge can and will suck an impressive amount of water off of the bank followed shortly by an equally impressive wave to replace it. This is not an area to be complacent. Always keep your head on a swivel and paddle to shore well ahead of the barge's passing. Have fun out there and remember to remain flexible in your fishing styles.