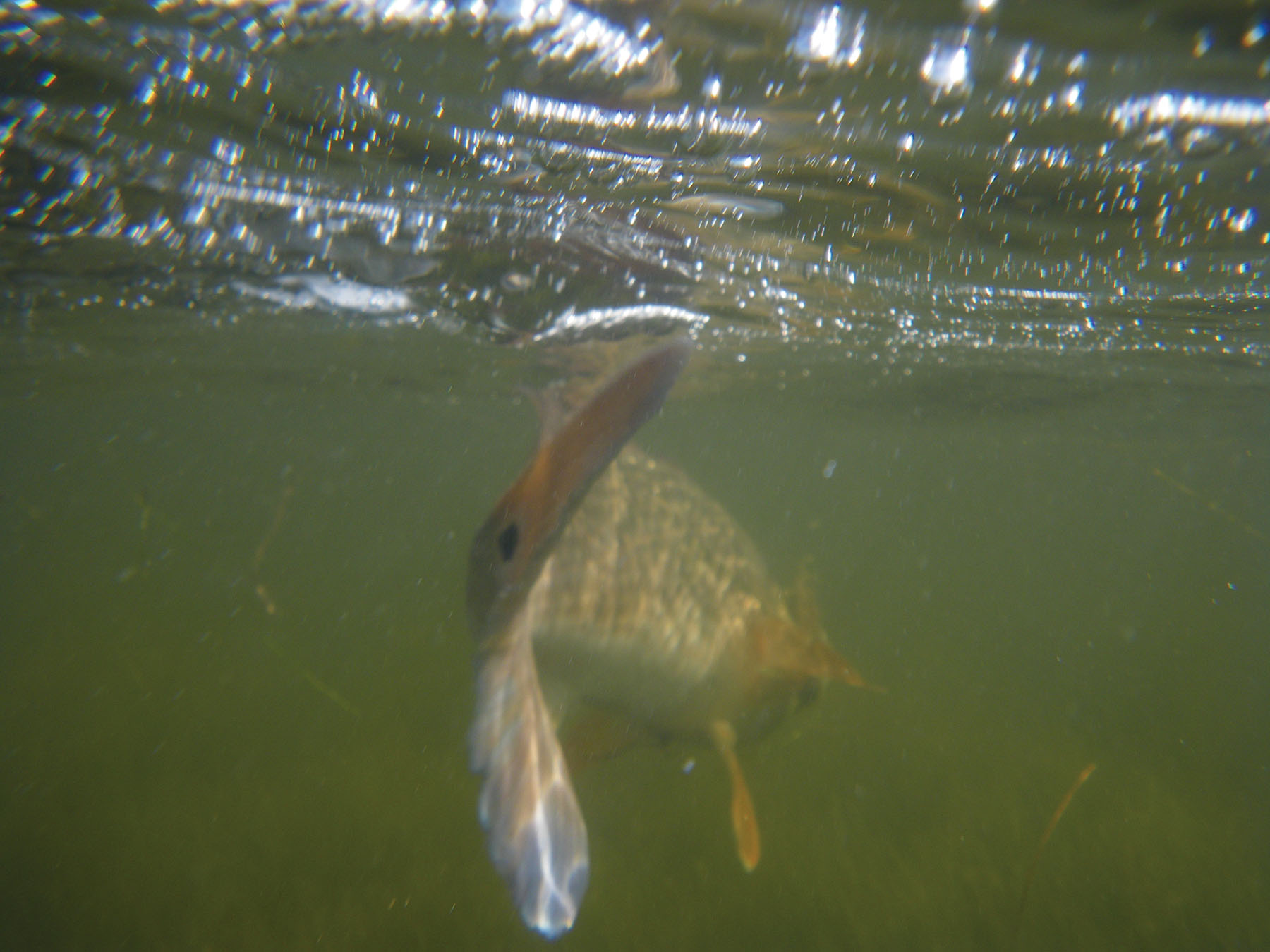 Sitting here on a cold and blustery January night I'm having a hard time getting stoked about going for a paddle. Sure I've got the good ol' Simms gear in the rack that would keep me comfortable and the big momma trout are in their typical winter haunts, but I'm just not feeling it. I've already grown weary of slow-bumping the bottom or twitching a Corky while waiting for that one subtle bite. My mind keeps wandering back to the recent autumn days of schooling reds going crazy on piles of shrimp. Those final days before the marsh water got too cold and the shrimp moved out with the ultra low tides of a blowing norther were simply nuts. Fat reds were eager to jump all over my fly so long as it landed in the same zip code. I much prefer the visual pleasures of active shallow fish over the mysteries of the unseen.

For now I'm staring down the barrel of February, my least favorite month on the calendar. And to top it off it's even got an extra day this year. Guess I've got the winter kayak blues. What I'm looking forward to is that first pre-dawn trip out to the truck when the warm humid air hits me. It's hard to describe, but I know it when I feel it. That morning will certainly be followed by a few more cold snaps, however it will signal the certain coming of another season for chasing the shallow water fish I crave.

The recent start of a new year got me to thinking of all the trips I'd like to make happen in the coming months. The last couple years I've been too much of a homebody, rarely getting too far away from my upper coastal marshes surrounding the Galveston Bay complex. Some trips are to old familiar places I haven't visited in a while; others have remained unchecked on my bucket list for far too long. Somewhere between guided trips and chores I'm going to make time to knock a few of these off.

First off, I need to slip off into the Light House Lakes with my old buddies Dean Thomas and Joe Poole for a couple days of cruising through the maze of mangroves. Some of my fondest memories in a kayak have been spent paddling alongside these two as we worked on solving the problems of the world. It really doesn't even matter if I catch a bunch of fish - so long as it is one more than they get. If you've never visited the paddling trails through the lakes you really need to add it to your to-do list. If I were forced to choose a single place on the Texas coast to fish for the rest of my life this just might get the nod. There is nothing like sliding into the seclusion of the mangroves at dawn, rounding a blind corner and sighting a wad of waggling tails. If that sounds like something you'd like to experience give Dean or Joe a call at Slowride Guide Service and they'll hook you up.

Tops on my list for places I haven't yet fished would have to be down at the southern tip of Texas. South Bay, to be exact. I really can't fully explain why I've never dipped a paddle into these waters. I've fished the jetties, the nearby grass flats and even in the Brownsville ship channel, but never ventured into this little jewel of a bay. If I could manage to snag a snook while I'm there I can cross two things off my bucket list. I've caught plenty of them in Florida, but still don't have my first Lone Star snook. From what I hear, I need to set aside a couple nights for drifting slowly across the flats tossing a big topwater into the darkness. I can almost hear the smack now.

Another place I've never paddled is Baffin. I've fished it from a powerboat, but I'd really like to mothership a kayak into some of the more remote areas and go exploring. More than a few hours of my time has been spent on Google Earth looking at the waters off the main bay and daydreaming of poling my Ride among fish that rarely ever see an angler. Everyone associates Baffin with big trout and they tend to forget about the reds. I'm betting I could give my fly rod a workout on some really fat redfish in some really skinny water. The uninhabited shorelines of this big bay have always been a draw for me. Fishing there is like going back to a time when there weren't so many people living at the water's edge. Yep, gotta make this happen sooner rather than later.

Hopefully this summer will bring about some more lengthy periods of calm weather. For the last couple years the brief windows haven't coincided with my free time, thus I haven't had the chance to paddle off the beach in search of kingfish and other pelagics. I've missed the screaming run of a freshly hooked king and the rush of adrenaline that comes from being pulled through the water faster than I can paddle. Heading several miles straight off the beach at sunrise in a small plastic boat isn't for everybody, but with proper planning it isn't as risky as it first sounds. Going with a group of capable and experienced paddlers is a must. Everyone in the group needs to be self-sufficient as the party is only as strong as the weakest link. Three miles off the sand is not where you want to find out that your partner can't do a deepwater re-entry or is physically not up to the task of paddling that far. My goal this year is a king on the fly from my kayak.

Speaking of endurance paddling, another trip I've been meaning to do for several years is to paddle the Port O'Connor kayak trail. I want to make it a multi-day paddling, fishing and camping excursion. This trail leads through some very productive shallow backwaters over to the old Army base on Matagorda Island. Four days should be about right in order to get in plenty of fishing time. My plan is to push through the first half of the route and then slow down to a leisurely pace while fishing through Mule Slough and Lighthouse Cove before arriving at the camping area on the island. The next couple days will be forays into Pringle and along the south shoreline of Espiritu Santo. The final day will be a reverse of the first. My "one of these days" trip starts off in the same manner, but instead of returning to POC I'd like to keep relocating camp each day as I work my way around Espiritu Bay winding up at Charlie's. I should probably work on getting that one done before I get too old to make it.

All this daydreaming and scheming must be good for the soul because I'm starting to feel the "shacknasties" retreating. See y'all next month, gotta go start tying up some flies and prepping equipment. Spring is coming, I can feel it.