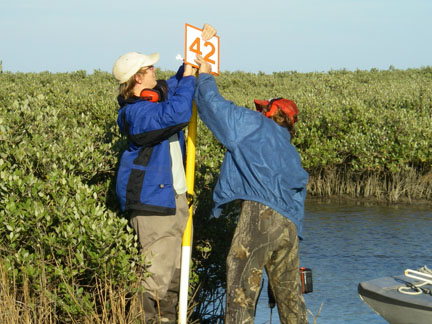 The older I get the more clearly I see that whole generation gap thing we always hear about. I guess it's only natural when you start getting grey around the edges to look at the youngsters and wonder what the heck is going to happen when these kids are in charge. Man, the music they listen to, their clothes, haircuts, weird piercings, etc, etc. Then again I'm sure my parents felt the same way, as did generations before them. I didn't set out to get this way; it just creeps up on you.

Then every so often I run across someone who gives me hope and it seems that most of these kids have one thing in common, they were raised to some extent in the outdoors. I don't know for sure, but it seems that hunting and fishing tend to create kids who have a greater appreciation for the world around them. I've had the great pleasure of watching one such youngster grow from an irritating little kid into a fine young man. D. J. Thomas, son of good friend, Dean "Slowride" Thomas, has just completed a journey that will serve him well throughout his life. D. J. made Eagle Scout and, in the process, helped those of us who enjoy paddling the Lighthouse Lakes Trails near Aransas Pass.

The trails are a special place perfectly suited to kayak fishermen. The area is a winding maze of tidal creeks and lakes surrounded by mangroves. It can be daunting to those venturing out for the first time. The mangroves are just tall enough to make it difficult to see over them and after a while everything looks the same. Several years ago Dr. Bill Harvey, then working as a biologist for TPWD, got turned around and ended up on an unplanned camping trip with only mosquitoes to keep him company. Thus the idea for a paddling trail was born. Markers and corresponding GPS coordinate maps were set up and navigating the lakes became much easier. I have personally been quite happy to run across these signposts after exploring off-trail for reds.

Over the years the markers became illegible and many simply disappeared. Navigating the trails safely and confidently was again becoming something only those with great local knowledge could accomplish. With TPWD funding running thin, replacing the much-appreciated markers was not high on the list. Kayaking has become important to the local economy and without those markers many visitors would likely shy from the maze and miss out on one of the true treasures of our coast. While paddling the trails, D. J. took note of the situation and decided to take it upon himself to replace them.

On the surface this might not seem like such a big deal but it became quite an undertaking. In fact, when D. J. proposed to make this his Eagle Scout project the coordinator felt it was too much. He had to work his way through the government red tape, obtain materials, get the signs constructed and then install the nearly sixty markers in their proper places. Undeterred, he set about getting the approvals in December of '07. The final marker was placed this past February. During that time he not only worked with TPWD, he had the signs constructed via the prison system that makes street signs. The original markers were plastic with vinyl numbers. The new signs are aluminum and painted with the same reflective material used on street signs and should last much longer. It says a lot about his character, for a teenage boy to maintain focus on an extended project and overcome the many hurdles thrown in front of him is impressive.

Equally impressive is Scout Troop 25 of Aransas Pass. Though the figures are unclear, it is generally accepted that only around four percent of boys entering scouting achieve Eagle Scout. This small troop has produced four in the past two years. Prior to D. J., Ryan Wyatt and Mathew Jones both made Eagle and their projects also benefited those of us who treasure the outdoors.

Their troop has been visiting and assisting at the Animal Rehabilitation Keep in Port Aransas for several years. The ARK is a place where injured seabirds and turtles are nursed back to health and then returned to the wild. While working at the ARK, Ryan learned that the facility could only care for a limited number of turtles due to space limitations within the manmade wetland where the animals are kept while healing. For his Eagle project he proposed to construct pens within the wetlands to keep the turtles separated and thus allow for a higher population. Ryan then constructed and installed the pens.

Mathew learned that a boat was need to traverse the wetlands and transport the necessary equipment to care for the turtles and birds. Funding at the ARK is limited and obtaining a boat simply wasn't in the budget. Mathew set out to fill the need by building a wooden clamshell dingy as his Eagle project. He acquired the materials and enlisted the assistance of his troop to build the dingy that was donated to Tony Amos, director of the ARK. This boat is a true work of art and has become a valuable asset to those lending Mother Nature a helping hand.

So the next time you start to think the world is in peril if left to the next generation; remember these fine young men and rest easy knowing there are many more out there just like them.