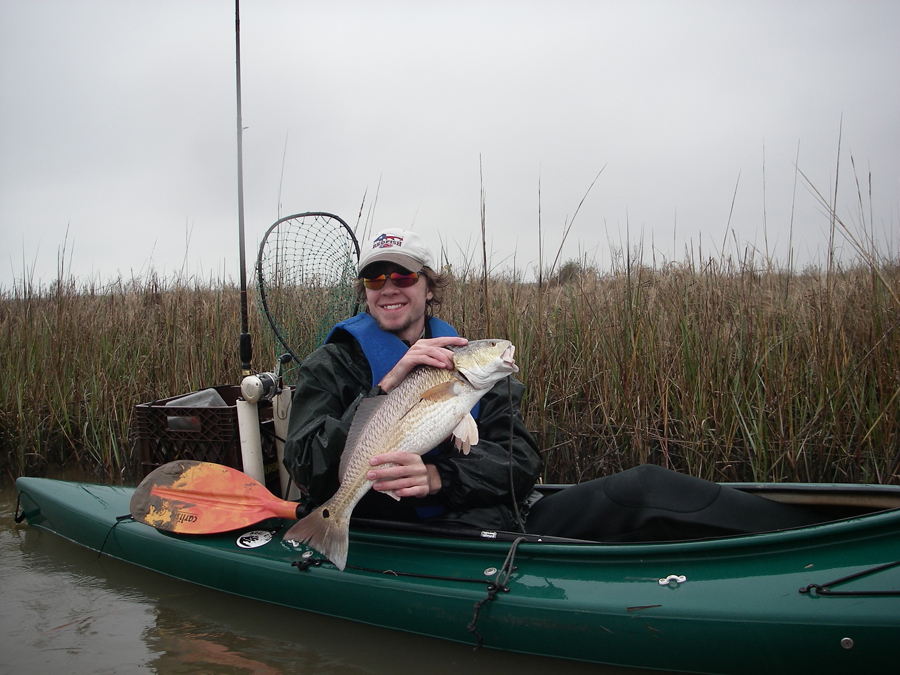 Tyler Tanton enjoyed fishing in this SINK... as if you couldn’t tell from his smile, that’s his first winter red!

The explosion in kayak fishing along the Texas coast came about with the introduction of the sit on top (SOT) kayak. This style of craft is by far the favorite of the coastal kayak anglers and with good reason. The SOT affords kayakers the ability to enter and exit their boat with ease. You also have the ability to move about rather freely in the open and unrestricted cockpit. There's a laundry list of positives for the SOT style of kayak, but that isn't what this article is all about. This month I'd like to get you thinking about a SINK. Now sink and boating aren't usually two words you want to hear in the same sentence, but in this case it makes sense. A sit-inside kayak is often referred to as a SINK, although purists would prefer us to use the term "decked boat."

Prior to the introduction of SOTs the SINK ruled and in certain parts of the country they still do. The reason our northern counterparts are holding on to their SINKs is the colder air and water temperatures up north. As most of you know, staying completely dry in a SOT is next to impossible. There are some models that are "drier" than others, but let's face it, we're sitting inches above the surface of the water dealing with wind, waves, and splashing fish. In the winter this situation requires us to wear waders and rain jackets in order to stay warm and dry. Not that this is a particularly bad thing, but the SINK offers us another option for staying dry while kayak fishing in cold weather.

The first thing most people think of with a SINK style boat is the image of some guy rolling over and flipping himself back upright with a tricky paddle move. Sometimes it's hard to get folks past that image of kayaking. While it is fun to learn, Eskimo rolls aren't something we strive for in kayak fishing. An unplanned rollover while kayak fishing will result in a floating garage sale of equipment, dunked reels, and a few items that'll require scuba gear to recover. The only exception I can think of to this rule is a friend who goes by the nickname of "Pogo." Kurt is an accomplished kayaker who paddles beautiful handmade wooden kayaks and delights in shocking his kayak fishing buddies by occasionally taking a spin to cool off on a hot day. I'm guessing he has to strip-clean his reels after every trip.

All SINKs have several traits in common. As the name implies, you'll be sitting down inside the boat's cockpit. Inside the cockpit you'll find a built-in seat and adjustable foot peddles. The higher priced models will have seats that are fully adjustable and extremely comfortable while a budget model may only have a plastic seat pan. Most of these kayaks will also have bulkheads within the hull to create dry storage areas in the stern and sometimes in the bow. These compartments can be accessed through hatches on the deck. An added bonus of these compartments is the flotation they provide should your cockpit become swamped.

While the majority of SINKs share the above traits, they fall into three separate categories; recreational, recreational/touring, and full touring. Touring kayaks are long narrow boats usually between sixteen and eighteen feet. They are designed more for speed than stability and require a bit more paddling proficiency to maintain an upright orientation. A full touring kayak is not really suited for the kind of kayak fishing most of us enjoy. It is simply too tippy for the average paddler to use as a platform for fishing. They are great for a multi-day camping/fishing trip where you use the kayak to transport your gear to a base camp and then spend your time wading. Perhaps that's a topic for a future article.

A rec/touring kayak is designed more for day use and light overnight camping. It is, as the name suggests, a compromise between a full touring boat and a recreational kayak. These boats fall into the twelve to sixteen foot range. They are somewhat wider and more stable than full touring boats. The Wilderness Systems Tsunami line is a good example of rec/touring kayaks. I've fished from the fourteen foot Tsunami several times and feel perfectly secure in doing so. The biggest advantage of using this boat is the ease of paddling long distances. Most any boat in this category will outrun any of the fishing style SOTs on the market. The downside is in the somewhat restrictive cockpit. There isn't much room to move around during a long day of fishing. If you plan on crossing large open water and paddling extended distances to reach the fish you might want to consider this style of kayak.

The kayaks we're most often looking at for fishing fall into the recreational category. These are usually between ten and fourteen feet in length with large open cockpits. This eases the fear some people have of becoming trapped in the boat should it overturn. In fact the cockpits openings are so large that even a skilled kayaker would be hard-pressed to stay in the boat long enough to complete an Eskimo roll. If you should happen to overturn in a rec kayak, something that is pretty hard to do, you'll simply fall out of the cockpit. The reason I say you are unlikely to flip one of these is due to the extra width and stability designed into them. While a touring kayak may only be twenty-one inches at its widest point, a recreational style kayak will be around twenty-eight inches. Twenty-eight inches is not considered to be all that wide for a super-stable SOT, but a SINK doesn't need to be any wider because your center of gravity is much lower. The additional width also allows you to move around and get comfortable while seated in the cockpit. This comes in handy during a long day of fishing. A further advantage to the added room is gear storage. You can keep an amazing amount of fishing gear, drinks, and snacks within easy reach inside the cockpit.

Most anglers who paddle SINKs leave the cockpit open, but on cold windy days you might want to consider adding a spray skirt to your rig.  Spray skirts come in a variety of materials from lightweight water-resistant nylon to fully waterproof insulating neoprene.  The type of skirt you chose depends on what you intend to accomplish. For the typical recreational kayak, a rather loose-fitting lightweight skirt intended to keep splashing water from finding its way into your lap is all you'll need. For extremely cold weather or rough conditions you might want to obtain a tighter fitting fully waterproof skirt. Not only will this style skirt keep you dry, it will also trap your body heat inside the cockpit. Add a dry top to the waterproof skirt and you'll remain surprisingly comfortable in the worst conditions. Fly fishermen get an added bonus when skirting their cockpit. The smooth material stretched across the opening acts as the perfect stripping basket.

Other than choosing a skirt, outfitting your SINK for fishing is quite similar to setting up a SOT. Add a couple of rod holders, mount a GPS or fishfinder if you choose, and maybe a cleat or two for securing an anchor rope. As with my SOTs, I prefer to mount my accessories behind me while keeping the front deck clear of obstructions.  One thing to keep in mind when setting out in a SINK is the accessibility of your gear. If you are accustomed to keeping everything in the open tankwell of your SOT, you'll need to plan ahead. It is rather difficult to access the internal storage compartment from the cockpit while out on the water. Be sure to put those things that you need within easy reach unless you'll be in an area that allows you to exit your kayak when necessary. An item you will want to keep within easy reach is a large sponge for removing any water that might splash into the cockpit. A handheld bilge pump is also a good idea should you find yourself needing to remove a large amount of water. They are cheap and easy to use.

While I tend to use a SINK only for cold weather fishing, there is nothing wrong with paddling one year-round. I've got several friends who simply prefer fishing from a SINK. They feel the advantage of staying dry and comfortable outweighs the open and exposed cockpit of the SOT.

One final note on SINKs. Anyone who knows me knows how I feel about tandem kayaks for fishing. I don't really like them. Two adults sitting four feet apart with seven foot rods chunking lures festooned with treble hooks is just asking for trouble. The exception is when taking a kid fishing. There are several great models of tandem sit-inside kayaks that fall into the recreational category. These are wide open boats similar in design to canoes, but more stable and easier to paddle. Having your young child within easy reach in the front seat of the kayak allows you to work with them on their fishing skills. I can't think of a better way to put a youngster on a pile of tailing reds than quietly paddling them into position for an easy cast.