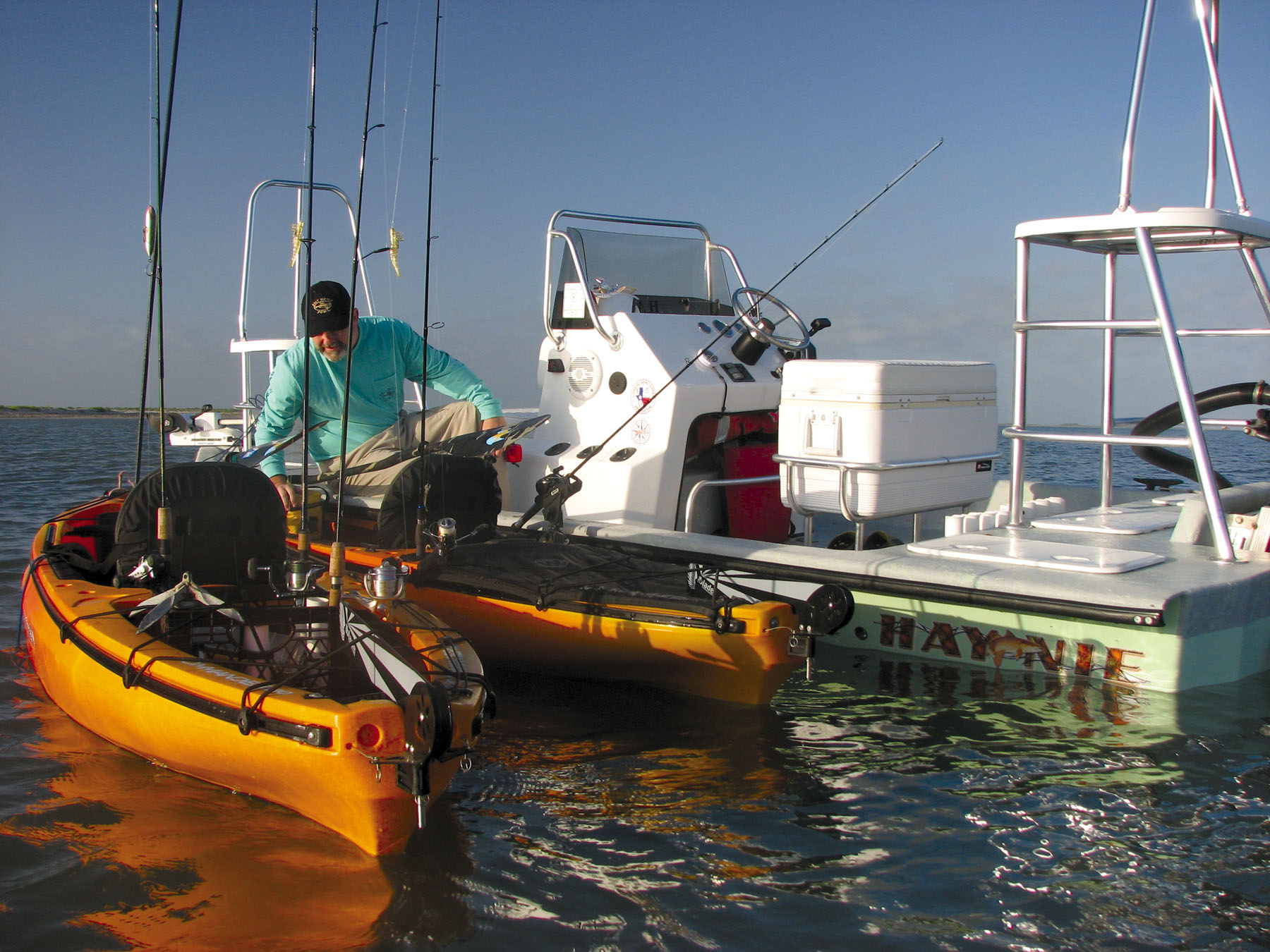 After the nastiest winter I can recall, I was finally feeling that wonderful muggy warmth of a Texas coastal morning. It was well before daylight and the wind was nearly dead still. The forecast was calling for wind, wind and a little more wind, but I didn't really care. I always welcome that first dry, cool morning in the fall and with equal anticipation, I look forward to the morning that confirms winter has passed.

I was standing there taking it in when Dean "Slowride" Thomas burst the quiet with, "You just gonna stand there or you gonna help load these kayaks?" He had been inside checking the tide levels trying to decide where to head. The flats around Aransas Pass had been bone dry for several days with unusually low tides. The tides had come up the previous evening and had him thinking that the reds might have moved up to take advantage of the new feeding grounds. Dean had been on some good schools in the deeper water just off the edge of the flats. It wasn't a sure thing, but worth taking a look.

The only hitch in the plan was the targeted area was a long paddle from any possible launch and the forecasted wind was going to make a really tough paddle on the return trip. It was also one of those places where a kayak is the best option as it was too shallow for a skiff and to muddy to wade. We decided to take the easy way out. No, we didn't blow off fishing in favor of a buffet breakfast, we loaded the kayaks onto Dean's skiff for a mothership trip.
There are thousands of acres of shallow flats on the Texas coast perfect for kayak fishing. Unfortunately, with much of our coastline in private ownership we can't easily paddle to all the places we want to go. Employing a power boat to transport kayaks opens up a whole new world of possibilities.

With the kayaks safely secured, we headed out across the bay. The sun was just above the horizon when we eased up to the edge of the flats and staked out the skiff. The flat was covered with just enough water for the reds to go on the prowl. As we were unloading the kayaks and getting our gear prepared I saw the first hints of life in the shallows. A school of reds was moving parallel to the drop-off a few yards from the deep water. With this being the first day of higher tides Dean had suspected that the reds wouldn't venture too far up onto the flats. He had also mentioned that they would likely be pretty spooky. He was right on the first count and I was sure hoping he was only batting .500 today.

As is always the case when we get a chance to fish together, the race was on. Dean guides kayakers for a living and usually has to let the customer take the lead once the fish are spotted. I am afforded no such advantage and any fish is fair game for whoever gets there first. It's a friendly competition that often involves blocking strategies as well as some inventive casting. This school was not impressed with our paddling skills and wanted nothing to do with our antics. They were long gone before the first cast hit the water. No problem, the next targets were already in sight. The flat was covered up with scattered pods of tailing reds, all within 50 yards of the drop-off.

We split up and started stalking. I had a pair of upper slot fish happily grubbing in the grass with their tails waving slowly moving my way. There was no rush and I was able to take my time and set up for an easy cast. Sometimes in mid-flight you start talking to your lure like a slightly errant golf shot, but not this time. The DOA plopped down a couple feet ahead of the fish, right where I wanted it. Apparently did not agree. Both fish bolted like I had seriously offended them. Dean had the same luck.

Inside of a couple hours we had successfully ridded the entire area of redfish without piercing a single lip. The pre-trip notion that they might be spooky was an understatement. I can't ever recall having that many chances at tailing reds without so much as a bump. Many of them never even let us get within casting distance before the tail went down and a wake would head towards deeper water. It was humbling to say the least.

The exercise wasn't a total loss though. I did get to put the new Wilderness Systems Commander through its paces. I wrote about the boat last summer after seeing it at the Outdoor Retailer Show and had been wanting to try it out. I wasn't overly impressed with the paddling characteristics, but it is a great platform for shallow water fishing. The boat is a cross between a canoe and a kayak similar to the Native Ultimate. It is very comfortable with a great seat that has multiple adjustments. A handy feature for the angler is the molded secondary seat on the rear deck that allows you to sit up a bit higher for a better view while still being able to paddle. The main seat slides up underneath the rear deck to make room for your feet. And from this position it is very easy to stand up for an even better viewing angle. The boat was also designed with rock solid stability. I wasn't the least bit unsteady while standing and casting. This isn't the fastest kayak on the market and I wouldn't chose it for open water-long distance paddling situations, but it is perfect for prowling the marshes and flats on a sightcasting mission.

Once we were sure that all of the reds had been sufficiently harassed, it was time to move to the drains on the edge of the drop-off. Within a few casts into the deeper water I felt the first thump of the morning followed by the thrashing headshakes of a trout. We spent the next two hours picking off trout that were scattered all along the edge of the flat. It wasn't sightcasting to tailing reds, but it was nice to get a line stretched while making plans for a full summer of fishing adventure.