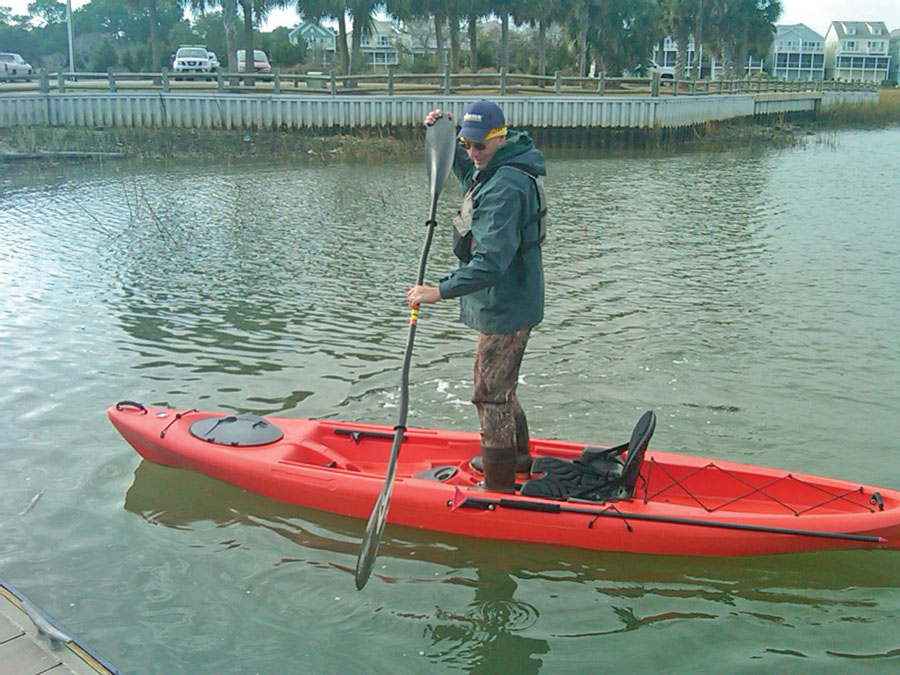 The 2012 Ride 135; finally a boat that’s great for standing and still easy to paddle.

Many years ago Everett (our editor) chanced to meet at Fishing Tackle Unlimited and naturally started talking fishing. Kayak fishing had been around a while, but was really just catching fire. He knew I was partial to standing up in my kayak to sightcast while he was of the opinion that staying seated and stealthy was the way to go. As we discussed the pros and cons he formulated an idea for an article debating the topic. We each sat down and banged out our argument for our preferred styles. I didn't change his mind and he didn't change mine, but the articles were at least entertaining.

At that time standing up in a kayak was unconventional to say the least. None of the boats available were really suited for it. I made do with the old original Ride and accepted that I was going to take the occasional unplanned dive. The pontoon style hull was more stable than anything on the market and gave me the best option for remaining dry. Every kayak is a compromise in some form or another, but the old Ride really suffered paddling performance in exchange for the necessary stability to stand. In other words, it was a true slug to paddle. However, I gladly gave up the ability to glide with easy paddle strokes in exchange for the higher vantage point.

I'd still suffer through that same grueling paddle today if it were necessary, but fortunately there were enough anglers on my side of the fence to catch the attention of kayak manufacturers. Today there are quite a few models with enough stability to stand and fish. The real plus is that they've also managed to design the hulls for easier paddling.

The only issue left was comfort while standing. Even though the various kayaks had the necessary stability, they still lacked a really good flat area to stand. At this year's Outdoor Retailer Show in Salt Lake City several models appeared with solutions to that problem.

Wilderness Systems showed up with their redesigned third generation Ride. I was a bit bummed that they were discontinuing the Ride 135 as I had a hand in the design. My mood changed when I laid eyes on the new creation. Once I got the chance to put in some fishing time on it I was completely sold.

The 2012 model Ride 135 received some minor tweaks to the hull design adding two inches in length and taking away a half inch of width while upping the maximum capacity rating to 550 lbs. It now paddles even better and the foot wells don't take on a bit of water with me and all my gear. The really interesting improvements are on the top side. The cockpit length is increased by thirteen inches and now has a large flat area perfect for standing comfortably at the mid-point of the boat. It also received the new sliding, removable Phase 3 Freedom Elite Seating System. This seat is super comfortable with several adjustment points and it can be moved forward or aft to level the boat according to the load. When you get to your fishing grounds and it's time to stand, you simply slide the seat rearward to expose the large flat space.

Other nice additions include the Slide Trax system already in use on the Tarpon series. You can now add all sorts of accessories without drilling holes in your new boat. For those who like to store extra rods inside your hull, they gave you a large waterproof center hatch that is angled slightly. I slid two extra 7' casting rods into the hatch with the tips pointed towards the rear of the yak. The rods were easily accessible while out on the water. I'll have to give Bob McDonough and his design crew an A+ on this one.

I wasn't really all that surprised to see the redesign of the 135 as the previous model had been around for several years, but what caught me off guard was the announcement of a new 11.5' Ride. I have to admit I was a bit skeptical of this boat as a fishing platform. I generally like a little more length because the shorter boats tend to "walk" back and forth when you paddle aggressively. My attitude changed after spending a couple days fishing from the little brother. It was very easy to paddle and tracked better than expected. The shorter length made zig-zagging through the winding marsh sloughs a pleasure. This model has all the same great features as the 135 along with an incredible 500 lb maximum weight capacity. The cockpit stayed completely dry and standing up was just as easy in this little boat as it was in the larger model. Color me impressed.

A relative newcomer to the fishing market, Jackson Kayaks, also introduced a couple interesting new models at the Outdoor Retailer Show that will fit the bill for the standing angler. Jackson has been well established in the whitewater market for several years and initially dipped their toe into fishing with the Coosa last year. The Coosa has gained a loyal following and will now be joined by two new models for the 2012 season, the Cuda and the Big Tuna.

The Cuda is a 14' low profile sit-on-top with some pretty cool features. The hull is basically a shallow V shape with pontoons for stability. The floor of the cockpit has a 22" wide flat area for standing. It also comes with their hi/lo seating system that allows you to sit low for added stability when paddling rougher water or lift it up a few inches for increased comfort and better visibility while fishing. A long hatch down the middle of the cockpit gives you several options. You can store extra rods inside the hull or use the drop-in tank as dry storage. They've also designed a soft-sided cooler that fits inside the hatch and is large enough for a couple slot reds or enough food and drinks to last all day. My favorite feature is a sort of hood on the bow designed to protect rod tips while paddling. I've broken a couple rods and had several more close calls when marsh grass or mangrove limbs have grabbed my tips while sliding through a narrow opening. The cover ends that worry. I haven't had the chance to fish the Cuda yet, but plan on doing so as soon as FTU gets their demo model.

Jackson's other new number, the Big Tuna, is due out around the first of the year. I'm not usually a big fan of tandem kayaks for fishing, but this one might fit the bill for those of you who need to take along a youngster on occasion. The removable seats can be set up with both facing forward or with the front seat facing rearward, a nice option for keeping an eye on the little one while fishing. For the times when you want to go it alone, the front seat can be removed and the rear seat situated at the center of the kayak turning the tandem into a single. Another unique feature with this kayak is a covered thru-hull center hatch opening. A flow-through basket sits in the opening to serve as a livewell eliminating the need for carrying a bait bucket with aerator. I included the Big Tuna in this article because it also has a huge flat area for standing and is a bit wider and even more stable than the Cuda. The unique features combined with the added stability are intriguing and I'll certainly give this one a spin as soon as it's available.

If you've always wanted to try stand-up sight-fishing but weren't comfortable doing so in your current rig, you might want to demo one of these models. Being able to see your target will open up a whole new world.