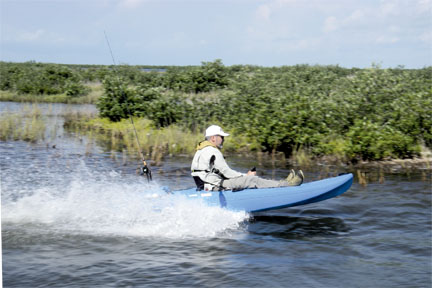 So the other day I get an e-mail from Pam Johnson saying I needed to check out some pictures of her on a Surfango kayak. I open the attachments and there's Pam cruising along on a kayak throwing a wake. The next shot has her fishing from the kayak while standing. Hmmm, looks like fun. A phone call later I learn that Surfango has a rep in Victoria, Texas. Cool. Even cooler was the invite to spend the day fishing out of one with Pam, EJ and Robby, the rep. I love this gig.

We meet at the Johnson's house around dawn and head down to the launch at Charlie's. The plan is to load a couple of Surfango Hawaii GTs onto EJ's flats boat and mothership to Matagorda Island. From there we'll cruise the back lakes testing the kayaks and looking for October reds. On the run over I get talking to Robby about the company, the boats, and how he got involved. The gist of it is he's been a pro racecar driver who turned family guy and needed to settle down. From California, he is used to fishing deep water and loved doing it from a kayak. Upon landing in Texas, he discovered flats fishing and got hooked on tailing reds. One day he walked into a store and saw a kayak with a jet-drive and bought it. He enjoyed it so much that he got involved with the company and now sells them.

EJ winds us through the backcountry and settles down near Power Lake. It's the middle of the week and we've got miles of marsh to ourselves. We off-load the kayaks and Robby gives us a brief run-down on the operation of this little jet boat. It has a 9.5 hp four-stroke engine, jet drive, and steers with a console joystick. You need about 6-8 inches of water to get on plane and it'll run through 3-4 inches. Next thing I know I'm sitting in the yak and wondering if I shouldn't be getting more instruction. Robby fires his motor up and says, "Come on, let's go." I hit the start button, pull the joystick throttle trigger, and off I go. Sweet.

Now I need to turn before I hit that shoreline. I lean the joystick left and the little boat responds in a smooth arc and I'm headed off chasing Robby's wake down a winding bayou connecting to the next lake. Controlling the boat is totally intuitive and takes only a few minutes to get completely comfortable. It's like a go-kart on the water and with the joystick you get to pretend you're a fighter pilot. All I needed was a missile and I could've taken him out from his six.

As we enter the lake he kills the motor and starts paddling. I follow suit and find that this little motorized yak actually paddles pretty good. I had figured it would be good for motoring, but tough to push with a paddle. We start casting and within a few minutes my first red of the day jumps on an Assassin paddletail and gives me a little sleigh ride. Robby heads back to the boat to let EJ have a turn. A few minutes later here comes Everett cruising by with a huge grin stretched across his face waving me on to follow him. I honestly don't think you can pilot one of these boats without grinning. We zigged and zagged along the winding bayou into Power Lake before stopping at the far shoreline to set up a drift. First thing out of EJ's mouth was, "This is cool." I have to agree. I have a powerboat and I obviously have a bunch of kayaks, this little craft is the best of both worlds. You can motor away from the crowd and then quietly paddle your way into the fish.

An hour or so later and with only a couple reds, it was obvious Power Lake wasn't the place to be. We decided to head out to the open bay and try the south shoreline where EJ had found some fish earlier in the week. Had we been paddling it wouldn't have even been an option due to the distance involved, but with the Surfango we just powered up and headed out. The funniest part of the whole day was cruising by some guys building a duck blind and watching the expressions on their faces as we zipped by doing 30 mph. I could just imagine their conversation when we faded from sight.

Upon leaving the protection of the lakes we headed straight into the chop of the open bay shoreline. It wasn't outrageous, but it was a little bumpy. I figured we were about to take a beating but was pleasantly surprised to find that the little boats cut the waves pretty good. I won't try to blow smoke up your skirt and tell you it was like riding a deep-V bay boat, but it certainly wasn't uncomfortable. In fact, it was fun.

A couple miles later I got hit in the face by that sweet smell of feeding fish followed up with the visual confirmation of a big slick just off the shoreline. I eased off the throttle and looked over to EJ who was doing the same. Without words we turned off the shoreline and circled upwind of the feed before cutting the motors. Within a few casts I was hooked up and getting pulled in circles by a solid red. The wind was pushing us too hard for a drift so we slid the yaks onto the shoreline and waded into a good bite. At one point I got the school cornered in a small cove and landed five reds on five casts. It doesn't get much better than that.

The bite slowed and EJ said the words I wasn't ready to hear, "I've got magazine business that needs to get done." Reluctantly, we waded back to our trusty steeds, powered up and cruised on over to the mothership for the ride back across the bay.

I know it may be blasphemy to the purist paddlers, but this little motorized yak is high on my "wants" list. For me it's all about the tools. I use the tool that fits the job at hand, whether that be my flats skiff for reaching far-off back waters or my kayak for silently pursuing tailing reds. I think the Surfango just might be the angler's multi-tool.