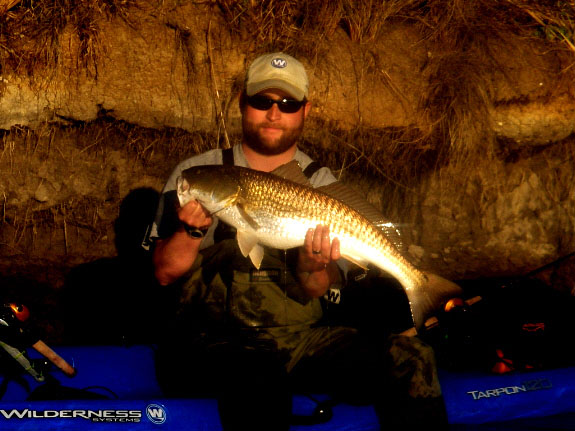 Redfish like this are what kayak anglers anglers in the Galveston Redfish Series and the Texas Kayak Series will be looking for this Summer.
Scott asked me to step in this month and give an update on the happenings in the ever-changing Texas kayak tournament scene. I'm fresh off appearances at the Texas Redfish Series event in Port Aransas and the Redfish Cup stop in Kemah. Fishing with the big boys in the "go fast boats" is fun but I'm ready to get back to the world of paddle power and plastic. No kill switches to test, no lower units to lose, no electronics to short out, no gas to buy it's just you, your little plastic boat, and the fish. That's the way I like it.

When most people think about fishing tournaments, they think big big boats, big engines, big entry fees, and big personalities. Many anglers envision a sport where the only thing that exceeds the horsepower is the amount of money you have to spend in order to compete. Trying to break into the world of "big-time" tournament fishing can be intimidating to say the least. It's tough to show up for an event and hear Trouty McRedfish talking about how he's been on the water every day for two straight weeks and how he's running 250 miles round trip to catch 18 pounds a day. Been there, done that. But let's face it; that is the reality you have to be ready for when you put it on the line to compete at the highest level.

But, there is an alternative.

What if I were to tell you there is an alternate universe where the only limiting factor on how far you can run is not the size of your gas tank or the speed of your boat, but rather how determined you are to reach your destination? What if I told you that in this strange universe, you could compete with some of the most knowledgeable and dedicated anglers in the state of Texas and all for the price of an entry fee that doesn't require a bank loan to pay off?

It's not a dream or the far-fetched ravings of a mad man. This is the world of competitive kayak fishing. There is a stigma among the general coastal fishing population that kayak anglers fish from kayaks simply because they can't afford a boat. After all, nobody would actually CHOOSE to fish from a kayak if they had access to a boat right? Wrong. Some of the most gifted and die-hard tournament anglers I've ever had the pleasure of fishing with are members of the kayak fishing community. We're talking about guys that will endure gusting north winds in the middle of February and blistering temperatures during the dog days of August just to bring a fish to the scales. Oh, and let's not forget, they have to reach all their destinations by paddling. That means no engines, no props, and no high-octane fuels (unless you count what they ate for breakfast). Dedicated or downright crazy? Even I wonder sometimes.

Texas kayak anglers have a couple of new and exciting events to look forward to in 2007 but before we discuss the new kids on the block, we have to give credit where credit is due.

The Stars & Stripes Saltwater Kayak Series is one of the longest running and most successful kayak tournaments in the state. From the beginning, the focus of the Stars and Stripes events has been fun and fellowship. These tournaments provide a great platform for new kayakers or first-time tournament anglers to get their feet wet and see what the world of tournament kayak fishing is all about. You won't get rich off the payouts but that is a result of the low-risk, low-cost entry fees and the payouts are always supplemented with a lot of great prizes from various sponsors. Throw in a laidback atmosphere, a weigh-in on the beach, some good food and plenty of drinks, and you've got a recipe for success. Even if you get skunked, the fun, food, and camaraderie shared among anglers are worth the entry fee alone. To learn more about the Stars & Stripes events visit: www.starsandstripesco.com

The "Speck"tacular Kayak Series is in its second year and still going strong under the direction of Sal Bautista. This year the "Speck"tacular kayak division has stepped up with a first place prize package in each tournament worth nearly $1000 and the angler of the year will receive a new kayak courtesy of Wilderness Systems (www.wildernesssystems.com). Anglers can turn in any combination of two fish (trout, redfish, or flounder) and there is a lb. live weigh-in bonus for each live fish weighed. Individual anglers also have the option of entering a team side pot. Teams may consist of up to four competitors and the heaviest combined stringer of four fish (any species) will take home the team money. The "Speck"tacular tournaments are extremely well organized and are smooth from the point of sign up, to the captain's meeting, right down to the weigh-in. Another added bonus of these events is the fact that the weigh-in is held in conjunction with the boater events. This gives kayak anglers an opportunity to rub elbows with some terrific trout anglers and show their stuff in front of the big boys. For more information about the "Speck"tacular Kayak Series check out: www.specktourney.com

Now let's talk about two exciting events that I believe have the potential to elevate the sport of competitive kayak fishing to levels that kayak anglers have never experienced before. The first is the Galveston Redfish Series. Again, kayak anglers owe a debt of gratitude to tournament director Sal Bautista and his staff for providing a venue where we can compete and exhibit our skills to the Texas saltwater fishing community at large.

The Galveston Redfish Series is unique in that it's the first redfish tournament series in Texas that will allow kayak anglers to compete head to head with boaters. Teams of two competitors can boat, wade, kayak, or use any combination of the three in their pursuit of two slot redfish. Kayak anglers pride themselves on the fact that they can fish and explore water where even the shallowest boats can only dream of going. This series will finally let them pit their redfish catching prowess against some of the best redfish anglers in the state. Based on the entry of 100 two-man teams, these one-day events will pay out ten places and the top dogs will take home $3450. A fifth place finish will net you $1050 which ranks right up there with one of the most lucrative paydays kayak anglers have ever had the opportunity to attain in a single-day event. You think you're ready to compete with the big boys? Now you can step up and prove it! For rules, payouts, and other information go to: www.specktourney.com


The guys at the Texas Saltwater Series must be doing something right. The Texas Trout Series is one of the most popular trout tournaments on the Gulf Coast. This is evidenced by the fact that the tournament has nearly doubled in size since last year. The Texas Redfish Series events are busting at the seams and there are teams literally waiting in line to get in on the action. But the boys at Simrod Outdoors aren't content to just ride the wave of popularity they've garnered in the boater world. New for 2007, they're introducing the Texas Kayak Series.

The Texas Kayak Series is offering kayakers a level of competition and exposure that exceeds anything that's ever been done before. Segments of the Texas Kayak Series will be featured on the Texas Saltwater Series television show, which is broadcast on Fox Sports Southwest. One innovative aspect of this series is the fact that a livewell apparatus will be required on ALL competitors' kayaks. While this will present some considerable challenges to many competitors, I applaud this requirement. I believe if we want to see the sport of competitive kayak fishing move forward, then we must work to develop a way to sustain live fish while in a kayak. I, for one, am thankful that a reputable organization such as Simrod Outdoors has stepped up to help us in this quest and I hope the kayak community as a whole appreciates this opportunity and embraces the challenge.

For years, the competitive kayak fishing community has struggled with the notion of a live weigh format. In the past, catch/photo/release (CPR) tournaments have been used with some success. However, the excitement and crowd appeal of a live fish weigh-in is tough to imitate through photos. The staff at the Texas Saltwater Series took the live weigh-in challenge head on and initiated a livewell design contest to see what the anglers could come up with. They are working closely with some of the winning designers to come up with an affordable way to transport live redfish that is safe for both the fish and the paddling angler. To get the details on the Texas Kayak Series visit their site at: www.saltwaterseries.com

I have been fortunate enough to fish other events put on by Simrod Outdoors and given their reputation for excellence and their dedication to get things right, I foresee a bright future for the Texas Kayak Series and the anglers who participate in these events. I believe this series, along with the Galveston Redfish Series could prove to be the stepping-stones that help take the sport of competitive kayak fishing to the next level.

To sum it all up, I'd like to encourage every competitive kayak angler, novice and veteran alike, to do two things...

First, I'd like you all to take a sense of ownership over this sport. Each and every one of us is an ambassador of this new and exciting way to fish and it is we who will determine how the competitive aspect of this sport will grow for years to come. In order for our sport thrive, we must always be good stewards of the three C's: conservation, courtesy, and the competitive spirit.

Second, I encourage you to get to know the tournament directors and their staff members who help to put on these events and be sure to thank them for giving us a place to compete and exhibit our skills. These individuals work incredibly hard, often times for very little or no compensation, all so that we can show off a few fish. Next time you're at a tournament, be sure and shake their hands and let them know you appreciate what they do for us. See you at the weigh-in.

Other tournaments of interest:

To stay up to date on upcoming kayak tournaments, keep an eye on these websites: