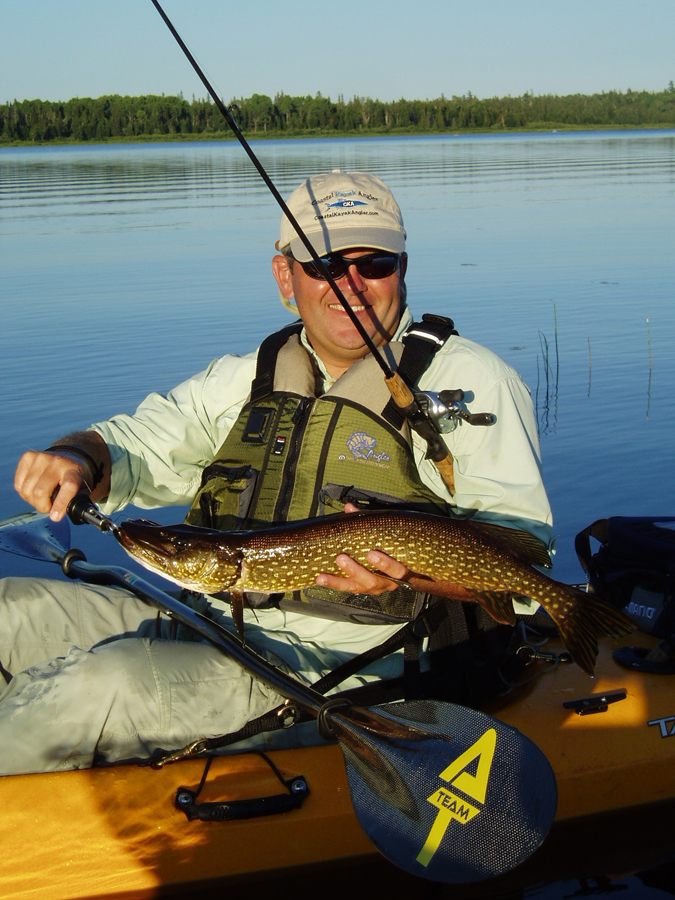 Last month I left you on the banks of the Ottawa River where we had been catching smallmouth bass in rough water. We were well north of Texas, but not nearly as far north as our next destination. The Outaouais wilderness area, located in northwestern Quebec, is a vast area with very few people and no paved roads. Our home for the next few days would be Brendan's family fishing camp on the shores of Luc Dumoine in the middle of the Outaousia. Brendan's father and his fishing buddy have had this camp since the early 70's. No road to the camp, no cell phone service, and no electricity. We were about to get as far away from the daily grind as possible in this day and time, but first we had to get there.

The morning after getting beat up by the whitewater on the river came a bit too quickly. I was worn out and not exactly looking forward to the projected six hours of driving we had ahead of us. On top of that, I still had not heard any word from the airline on my lost rods. I love fly fishing, but I sure did want to have my full quiver of conventional tackle available to us. Upon arriving at Ken's house Joel and I found the crew busy loading the two trucks. I was relieved beyond words to see my rod tube leaning against the side of the truck. Holding my breath, I slid the bundle of rods from the tube and found everything intact. Sweet. Now we can go fishing.

Two trucks full of people, kayaks, gear, and food headed out of Beachburg just slightly behind schedule. An hour and a half later we were at the end of the paved road and getting our permits to travel into the wilderness area. For the next 100 miles we bumped and bounced along a dirt logging road through some beautiful and remote country. Four hours in we came upon an unbelievable sight. There in the middle of nowhere was a grand fishing lodge perched on the banks of Ten Mile Lake. It was hard to imagine anyone living this far from civilization, but there was Mr. Richard (pronounced Reeshard) Lauson. Richard and his wife live at the lodge year-round and host fishermen from all over the world. Once a month Richard makes the four to five hour journey to town whether by truck or by snowmobile. He proudly showed us all around the lodge that he built himself and then gave us a tour of his 15,000 kilowatt hydro-electric power generation dam. Amazingly he also built the dam and installed the generator himself. I think Richard could build a city in these woods if he put his mind to it. As crazy as it sounds, he was talking of putting in a nine-hole golf course next year.

After our visit at the lodge we were off again for the final thirty minute stretch of rough road leading to the boat ramp at Luc Dumoine. The crew split up at this point with four of the guys paddling off in the kayaks headed to the camp while the rest of us stayed behind to unload the trucks. An hour or so later the kayaking crew returned in three small aluminum motorboats that are kept at fish camp. We severely pushed the limits of the little fourteen footers with all our gear, but somehow we crammed all our stuff into the boats and made it to camp. By the time we got settled we only had a couple hours before sunset.

I guess we could've taken the evening off, but here we were in the middle of the most pristine wilderness I'd ever seen and the fishing bug was biting. It didn't take much convincing to get everyone out on the lake. But there was a twist. Ever heard of a fishing lease? Seems Richard has leased the rights to fishing for a huge chunk of the area around the lodge. His lease included the waters in front of the camp. It was actually illegal for us to walk to the end of the dock and cast! We were required to travel by boat several miles north of camp before we could even wet a line. I was dumbfounded. According to Brendan it had been this way for several years. Could you imagine having one of the floating cabins in the Land Cut and not being able to fish off the porch or even in 9 Mile Hole?

So off we went in the power boats pulling the train of kayaks. Once settled into my kayak I paddle off alone to a nearby cove and just sat there taking it all in. It was one of those cool moments when you stop everything and just think about where you are in the world. A year ago I couldn't have ever imagined that I'd be sitting in a kayak on a lake six hours from civilization casting into the waters of a beautiful glacier-formed lake. Life truly does have some incredible twists in store.

I was snapped back to reality by a vicious slashing strike. A big pike had just taken a swipe at my topwater and missed. It was time to concentrate on the business at hand and catch a few fish for the cameras. I was throwing my standard redfish pattern Spook Jr just like I do on the Texas bays. My Canadian partners weren't too impressed. They had their own ideas about what would work and the Spook Jr didn't pass muster. The little pike in that cove had no problems with it. Apparently a baby pike will eat a baby redfish. The evening drew to a close with a fantastic sunset. As per our previous adventures we hadn't exactly slain the fish, but a few good film clips were captured and we had gotten a taste of what to expect for the remainder of the week.

The following morning dawned clear and cool. There was hardly a breath of a breeze leaving the lake looking like a huge mirror. It felt a bit odd to put on a jacket in July, but about five minutes into the boat ride to the fishing grounds I was happy to have it on. Apparently the fish weren't too impressed with the conditions. The first couple of hours were spent practicing our casting. It wasn't a total loss though. The photographer, Jock Bradley, managed to capture one of the coolest photographs I've ever seen. Joel and I were casting into a cove full of pickerel weed just as the sun was starting to peek through the trees. The cool air and warm water combined to create a foggy haze that was rising from the water all around us. Jock triggered his camera just as I cast towards the sun and caught the brief reflection of light off my line as the lure sailed through the air. I don't know when or where that photo will get published, but I imagine Jock will get a pretty penny for it. You guys know the fishing was bad if all I'm talking about are the pretty pictures, huh?

Turns out the afternoons were the prime times. Even these northern fish appreciate a few hours of sun to warm things up before they feel like eating. Every morning was cool and the fishing was slow. The afternoons were much warmer and that seemed to turn the fish on. It took a couple days to decipher the full pattern, but just like everywhere else there was a certain combination of factors that led to the best fishing. The first clue was the higher activity levels in the warmer water. Several western shorelines had exposed rocky cliffs above the water. The rock extended down into the water. The eastern facing rocks obviously get the most hours of direct sunlight and absorb the heat. The rocks in turn radiate that heat into the surrounding waters. One afternoon I paddled over to the base of one such place and could feel an obvious difference in the water temperature compared with the open water. I put out a diving crankbait and slowly trolled parallel to the base of the cliff. I couldn't travel more than a few yards before getting bit by pike from eighteen to twenty-four inches. It was very satisfying to put the old brain to work and come up with the correct answer in a foreign place on a fish I had no experience with.

The next revelation was in the choice of lures. Being new to this type of fishing I had relied on my hosts for advice on what to throw. Diving Rapalas and small white curly-tail jigs were their favorites. I caught fish on them and even had a few on my trusty Spook Jr. But as the days went on I noticed that the bigger pike were trailing my lures right up to the boat without ever attempting to strike. I tried varying the retrieve and still had no luck enticing the big ones. On a leg stretching shore break it suddenly became crystal clear. I was staring at the water watching these little minnows swimming around in the pickerel weeds when I realized they looked just like my favorite tequila gold Norton Bull Minnow; same size and about the same color. Damn, why had I waited until my last afternoon to figure this one out? I dug through the tackle box and tied one on with a 1/16 ounce weedless head. I tossed that Texas transplant into the weeds and dragged it back towards the drop-off. It didn't take long to verify my hunch. Pike after pike slammed the little paddle tail lure with the top fish going thirty inches.

While I was busy wearing out the pike, the rest of the guys had unlocked the combination for the walleye. They had found a submerged weed bed in about four feet of water that was crawling with keeper-size walleye. As the sun went down I paddled across the lake and joined them for about thirty minutes of non-stop action. It really didn't matter what you threw as long as it ticked the top of the grass without getting hung up.

That was a fantastic afternoon of fishing, but unfortunately it was our last in this wild and beautiful place. Too soon it was time to pack our bags and prepare for the long trip home. Later, after a dinner of fresh walleye I went out onto the dock and stared at the night sky. I always like to get out in the country where the skies are darker and the stars are bright, but I'd never seen anything like this. On top of seeing more stars and planets than ever before, I could easily see the cloud-like Milky Way from horizon to horizon. I love that uneasy feeling of coming to grips with how insignificant we as individuals really are in this huge universe. It helps keep the small problems in perspective.