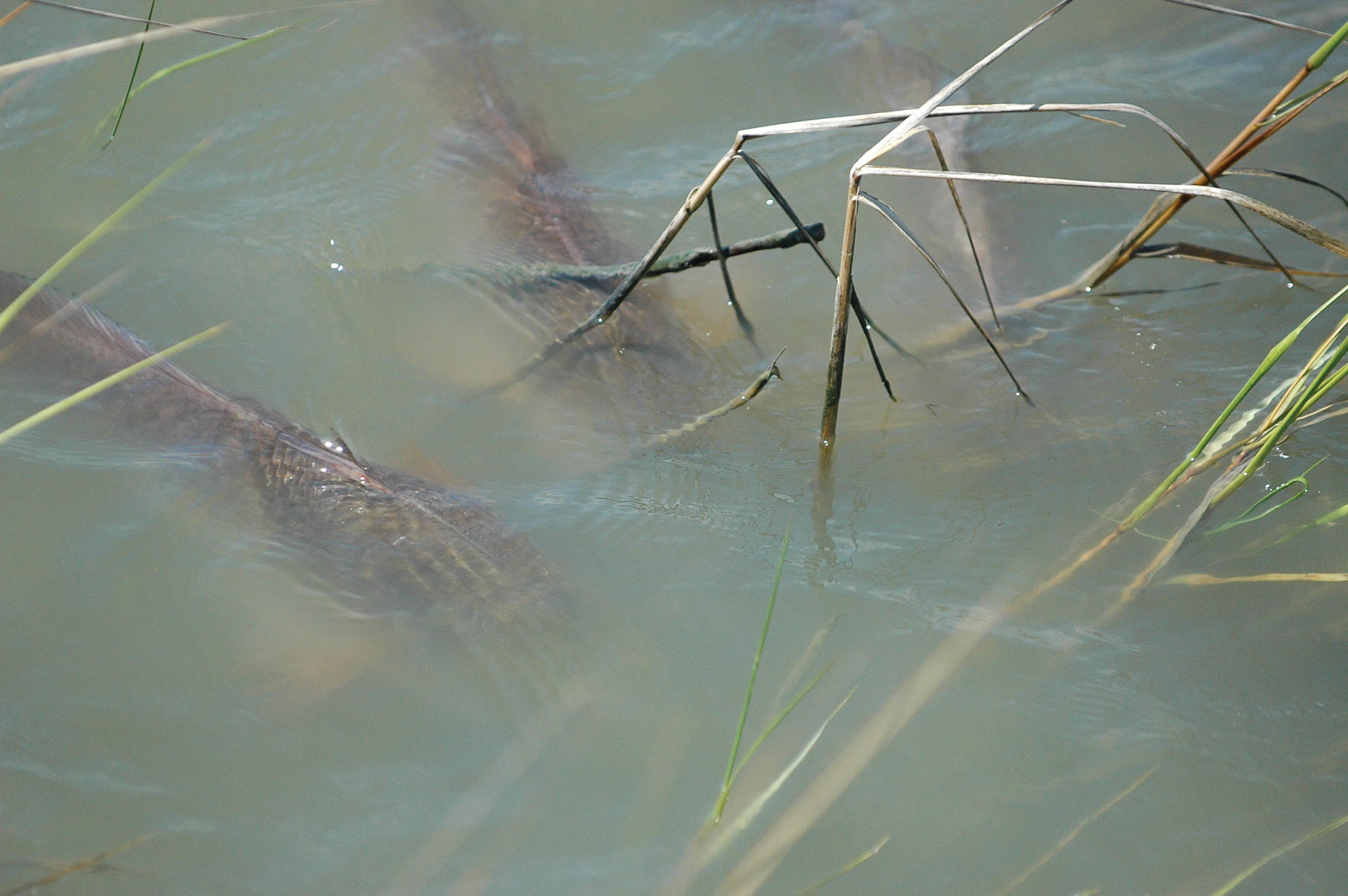 Fishing from a kayak affords the ultimate in stealth – take advantage when you can!

I am hopeful that by the time you read this we will have had some nice soaking rain over the Texas coast to set us up for fall fishing season. October is usually my favorite month of the year for fishing the marsh. The weather is nice, the bait is plentiful, and the gamefish sometimes feed all day.

The only hitch in the plan so far is the dreadful drought we've been experiencing. Much of the bait we count on need freshwater to flourish. Our normally brackish marshes are currently as salty as the Gulf, in some cases even more. It has been one weird summer in the back lakes. Sharks, dolphin, and jacks have all been unusual company further into the marsh than I've ever seen them. The shrimp migrations have been sporadic and this has led to unusual movements of redfish, presumably constantly on the search for areas with abundant forage. At times I have been on large concentrations of reds for several days only to return one morning to find the entire area void of fish. In normal years an area will slowly build a good population and then lose fish much in the same manner. Suffice to say what I've experienced this year is highly abnormal.

As we all know, successful fishing is all about figuring out the patterns. It has always been my experience that if you find a pattern that is working in one part of the bay system then chances are good you can replicate that pattern in other areas even though they may be miles apart. That has not been the case for me this season and it has led to some serious head-scratching. The only explanation that makes sense are the widely scattered pop-up showers giving rise to isolated forage species hatches and migrations in the areas where the rain has fallen.

On the plus side, it has led me to study the marsh and its inhabitants more thoroughly. In the past I tended to rely heavily on my tried and true method of slowly paddling through the marshes watching and listening for reds feeding on the shorelines. Once a red made its location known by blasting the bank I would ease in and wait for the fish to show once more. An accurate cast to the next toilet flush would often be rewarded with an immediate reaction strike. When shrimp are present, the reds tend to work slowly and methodically down a shoreline making them fairly easy to figure out.

But what about when there aren't any shrimp? First, you must accept two constants. Reds are almost always present in the marsh and they are opportunistic feeders. In addition to the normal variety of shrimp, fish and crabs; I've seen or heard of reds with eels, frogs, snakes, and even field mice in their stomachs. Your assignment is to figure out what they are targeting and adjust your approach accordingly. Here are a couple scenarios and the solutions I found.

Throughout the late spring and early summer the winds were relentless and led to higher and somewhat off-color water deep in the marsh. Shoreline blow-ups were basically non-existent and the clarity wouldn't allow you to see the fish. At first I thought they were likely still working the shorelines, but higher tides masked the feeding activity. Relying on lures that would quickly cover a lot of water seemed the way to go. My go-to search lures are spinnerbaits rigged with TTF Killer Flats Minnows and also small topwaters. It worked, but the overall catch numbers were not that inspiring. Also, while paddling close to the shorelines there were very few mud puffs leading to the conclusion that there weren't many reds in these areas of the marsh.

That plan was blown apart when I started running over scattered fish far off the shorelines. Grunting reds scooting out from under the kayak leaving the telltale mud clouds got me to thinking they were in some sort of non-feeding funk. After all, there were no obvious signs of feeding and they weren't overly responsive to my search lures. Upon cleaning a couple of these fish, a stomach examination revealed nothing but crab parts. I don't claim to be the sharpest hook in the tackle box, but I got the hint.

The next trip I decided to target these fish with a slower and more deliberate approach. While staked out near a drain to one of my favorite ponds I started tossing out a Buggs jig and slowly bumping it along the bottom. The seductive wiggle of the rabbit fur jig along with the small puffs of mud created by letting the lure hit bottom were just the ticket to drive those reds crazy. I suppose these jigs look enough like a crab to fool them. Problem solved.

The next mystery occurred a couple months later. There had been a few decent rain showers over the marsh leading to a decent showing of shrimp. The reds went to pounding them along the edges of the grass and I fell into my old pattern of tossing light colored Killer Flats Minnows up against the banks wherever there was a blow-up. An erratically jigged KFM in the right color can easily pass for a fleeing shrimp. Then something changed. The reds would blow up hard on a shoreline and then disappear. There weren't any follow-up strikes and tossing a lure in there was a waste of energy.

It took some time and close observation to put the pieces together. First off, the blow-ups were almost always on points or in the back of small coves, nothing on the straight run shorelines. Paddling right up to the spot would result in spooking a red ten feet or so off the bank, but nothing up tight. The action was so sporadic and unpredictable that it was tough to anticipate where it would occur in order to observe what was going on. By sitting quietly in an active cove I got lucky and saw the event unfold. Single reds were herding small schools of baitfish up against the grass and then blasting into them using the shoreline to cut off their escape. Following the strike, they would ease off the shoreline a good ways and sit still for a couple minutes before returning to the hunt.

The solution was to watch for a school of bait that started getting into a tight ball and hugging the shoreline. Tossing the trusty spinnerbait or a TTF Big Mino right into that bait school would send the baitfish in all directions and induce the red to make a move on his escaping meal. The lure would often get their attention as it was the slowest to flee and my reward was a solid thump.

The whole point here is that we often fall into a rut of throwing the same favorite lures into the same familiar places without much thought about what is really going on out there. When times are easy we'll still catch some fish, but when times get hard it can lead to some frustrating skunks. As kayakers, we have the advantage of stealth. Make use of that advantage to quietly enter an area without causing too much disturbance. Slow down, watch for the clues and use that brain for something other than daydreaming about the last time you actually saw it rain.