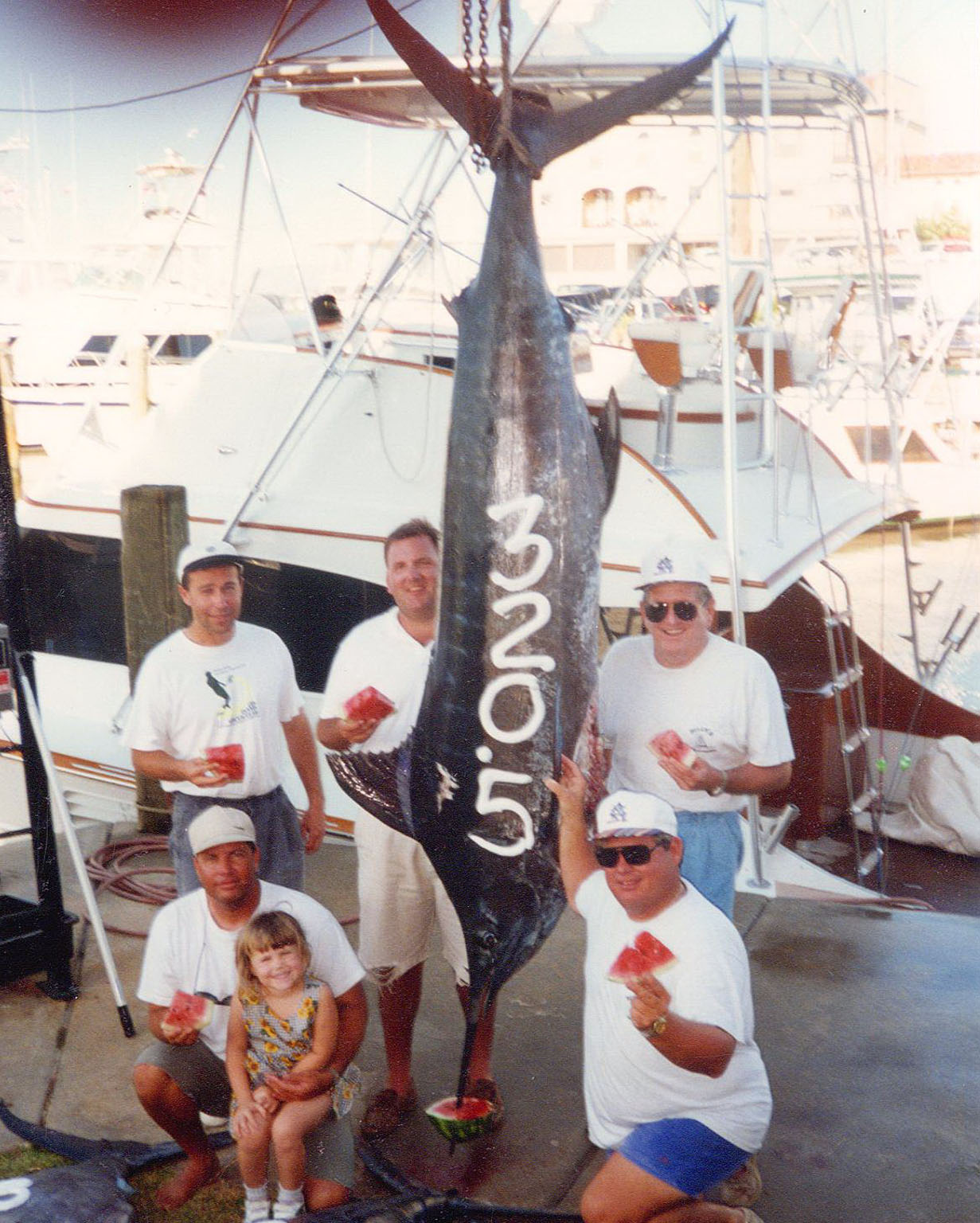 Well, it's been a year now since we started this column and we hope you have enjoyed what we've had to say. Throughout the year we try to give you an inside look at what's happening in the world of big game fishing in the Gulf of Mexico. We are dedicated bluewater fishermen and are excited to be part of this great magazine. This time of year we get a lot of questions about tournament dates and locations. Many anglers start planning their summer schedule right now, so we thought we would highlight some of our favorite big game tournaments coming up.

This is a tournament we put on each year that runs the entire summer. Anytime you go fishing, you are fishing the tournament. No pressure, no dock times, just go fishing and have fun. The largest blue marlin of the season wins the tournament. If you catch a fish in another Texas tournament it counts in this one. Contestants can call in to find out what size blue marlin is on the leader board, so non-qualifying fish are not taken. There are also divisions for wahoo, tuna, dolphin and swordfish. You can win $50,000 for breaking the blue marlin state record state record or $15,000 for breaking the yellowfin tuna state record. For more information contact Byrd & Cochrane 281-291-0656

This tournament is held out of Venice Marina in Venice, Louisiana. It's a relatively new, big money tournament. The rules are similar to the Mississippi Gulf Coast Billfish Tournament with many divisions and jackpots to enter with big payouts. It is held just before the Biloxi tournament, so boats traveling over can fish both tournaments back to back if the choose. For more information go to www.comefishla.com

This is a very large event held each year out of the Isle of Capri Casino in Biloxi, Mississippi. This big money event usually draws around 100 boats and is one of the richest tournaments in the Gulf. There are divisions for many species and the payouts can phenomenal. The total money awarded at this tournament has exceeded $1,000,000 in years past. How about $90,000 for 1st place wahoo or $40,000 for 1st place dolphin? It can happen at this tournament, but you have to pay to play. For more information go to www.marlininternational.com/isle.htm

This is a billfish release tournament organized by the Houston Big Game Fishing Club and held out of the Galveston Yacht Basin. Awards are based on video release points, no billfish are brought to the dock. Top woman angler and top junior angler receive trophies. For more information go to www.hbgfc.com

The Port Aransas Masters has been around for many years and is now combined with the Fred Rhodes Memorial Tournament. Proceeds from the tournament benefit the Fred Rhodes Memorial Fund. This is the kick-off tournament for the summer fishing season in Port Aransas. The tournament has a video release format for billfish and includes pots for tuna, wahoo and dolphin. For more information contact Riley Rhodes at 361-850-7804.

The 23rd Annual World Cup Blue Marlin Championship is held July 4th worldwide. We included this tournament because it is very unique. Founded in 1985, by former Dallas Cowboy's President and General Manager Tex Schramm and Miami Herald sportswriter Jim Hardie, their concept was to fish anywhere in the world on the 4th of July from 8:30 to 4:30 local time. The tournament slogan is "One Tournament, One World, One Champion". The minimum size for qualifying blue marlin is now 500 lbs. Entry fee is $3000 per boat and the heaviest blue marlin wins it all. IGFA rules must be followed. Although you are fishing against boats in places like Bermuda, Madeira and Hawaii, there is still a chance of winning here in the Gulf. In 1989, it was won off Texas with a 544 lb. blue. For more information go to www.bluemarlinworldcup.com

One of the premier tournaments on the Gulf Coast, "Poco" is an invitation only, giant party/tournament held each year in Port O'Connor. The fishing and non-fishing episodes of this prestigious event are legendary. You better rest up for this one because it's five day long and takes at least five days to recover from. This is not just a tournament; it's the social event of the summer for most sportfishermen. Boats are entered in the tournament and then of their potential prize winnings are bid on in a calcutta-style auction. Rival boat owners and anglers bid on each other's boats and the end result can be a payout of immense proportions to whoever wins. There is an offshore and inshore division, so you can take your pick blue water or brown water. For information on this tournament contact Kim Brown or John Blaha at 713-626-4222.

Another big tournament on the coast is the Rockport Offshore Challenge (ROC) held out of Key Allegro Marina in Rockport, Texas. Last year's tournament had 79 boats entered and the winning blue marlin was 533 lbs. caught by Donnie Seay on the "Seay Goddess". In addition to the other prize money, Riviera Yachts, the major sponsor, puts up a grand prize of $25,000 for the largest blue marlin. The tournament also has divisions for wahoo, dolphin, kingfish, tuna, ling and red snapper called the "Super Six". Last year's "Super Six" overall champion was Ed Bass on the "Akela". Located near Port Aransas, this tournament takes advantage of the great fishing just offshore. For more information go to www.rockportoffshore.com

The Texas International Fishing Tournament (TIFT) is one of the oldest tournaments on the Gulf Coast. This year marks the 69th annual TIFT, held each year out of Port Isabel /South Padre Island. It is also one of the largest tournaments in Texas with inshore and offshore divisions and this past summer a record 520 boats fished. Also, 56 billfish were caught or released. This southernmost port in Texas is the closest to the 100-fathom curve and many anglers take advantage of this feature. The drop-off is known as "The Canyons" and is where the continental shelf drops steeply away only 45 miles offshore, a short run for Texas bluewater fishermen. Other deeper structures like "Colt 45" and "Camels Head" are farther out and attract many big game fish as well as big game fishermen. For more info go to www.tift.org.

The Texas Legends Billfish Tournament is held each year to honor all of the fishermen who have passed on in our sport. The top boat of the tournament will receive the prestigious Bob Byrd Memorial Trophy to keep for one year. A Texas Big Game Fisherman's Roll Call was created to include the names of all those who have passed on. This year we have added the Capt. Bill Hart Memorial Trophy to be awarded to the top captain. Capt. Bill passed away this year and his presence will be sorely missed by all. We have also established a "Hall of Fame" to include not only Texans who have contributed greatly to the sport of big game fishing, but to all segments of saltwater fishing. Each year several inductees will be voted into the Texas Saltwater Fishing Hall of Fame and they will be recognized at this tournament annually. Other inductees will be honored in different ways. This recognition is long overdue for Texas fishermen and we consider it a privilege to celebrate the lives of those who have made a difference in our sport. This tournament is unique in that once you are registered you may leave from any Texas port. We have pioneered the concept of a big money - video release format with points awarded for blue marlin, white marlin and sailfish. Last year's top boat was Robin Parsley's "Rock-N-Robin" with two blue marlin and one white marlin released. For more information on the Texas Legends Billfish Tournament and the Texas Saltwater Fishing Hall of Fame, contact Byrd & Cochrane at 281-291-0656

The 10th Annual Texas Women Anglers Tournament (TWAT) is a one-day ladies event located in Port Aransas. With 53 boats fishing last year, it is the largest Lady's billfish tournament on the coast and is a favorite among the girls and guys. The tournament also includes pots for tuna, wahoo and dorado. It's a lot of fun and the whole tournament is designed to cater to the ladies. All proceeds go to the women's shelter in Corpus Christi, Texas. For more information go to www.gofishtx.com

The first ever Texas International Boat Show will be held at the brand new Corpus Christi Downtown Marina, April 26-29th. It's the first big Florida style "in the water" boat show to hit the Texas coast. Exhibitors from all over the nation will be there. At the show you will see lots of new boats, motors, accessories, trips, guides, tackle and electronics. Come see us at the Tops-N-Towers booth and talk about fishing or rigging your boat. This time of year many boat owners decide to sell their boat and move up to a bigger boat while there is still time before the fishing season starts. Byrd & Cochrane is an authorized broker for Fox Yacht Sales who will also be in the show representing Cabo and Riviera Yachts. Come by the Fox Yacht Sales booth and see our new Cabo 32 and Cabo 40 as well as several new Riviera sportfishing boats, made in Australia. Fox has an extensive inventory of brokerage boats as well and will be displaying pre-owned Cabo express models and a like new 2006 60ft. Riviera enclosed bridge sportfisherman. We specialize in sportfishing boats and motor yachts. Come by and get a great deal on your next boat. For more information call our Houston sales office at 281-291-0656 or the Port Aransas office at 361-749-4870 or check out our website at www.foxyachtsales.com or www.byrd-cochrane.com.