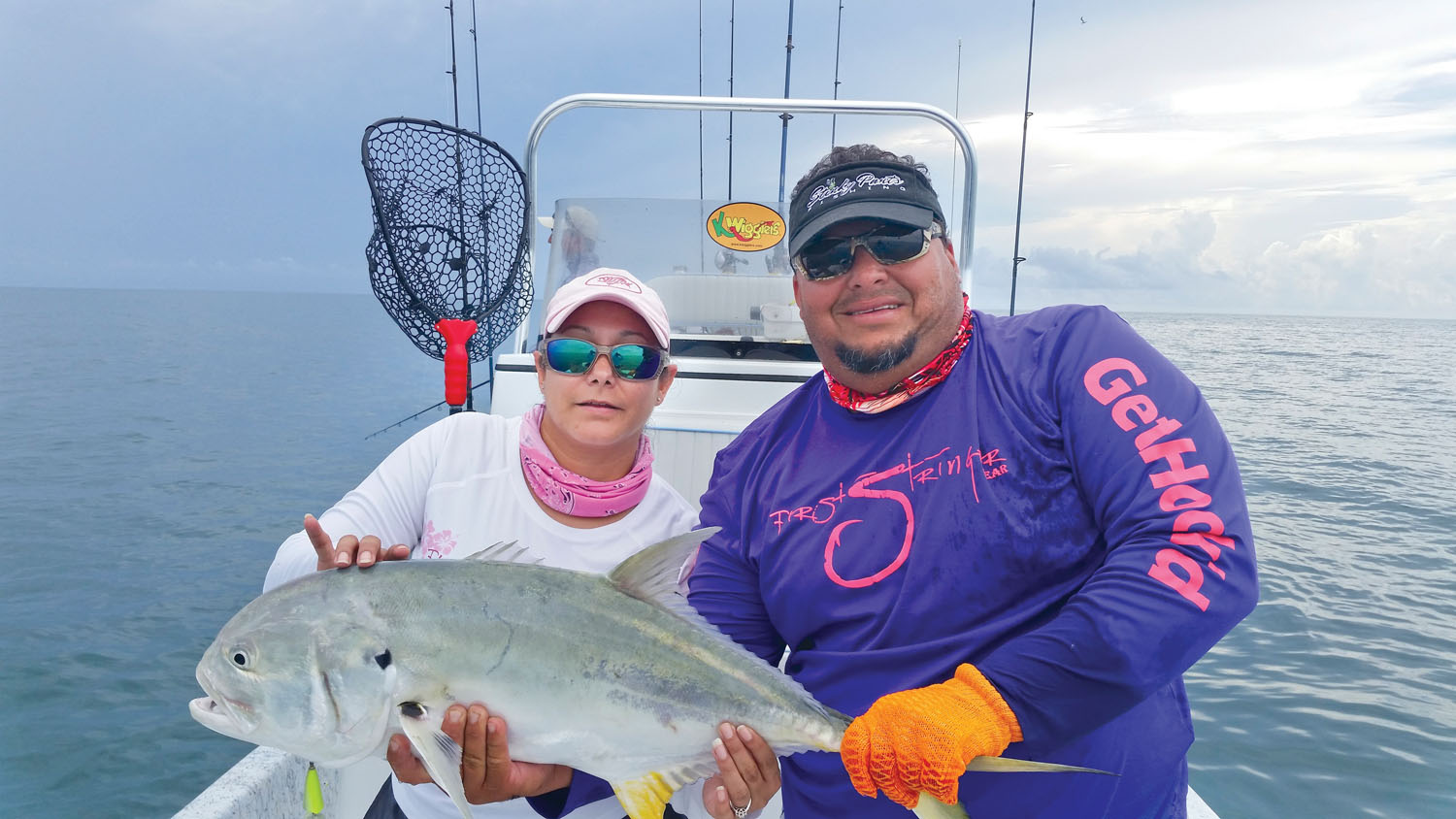 Jackfish crashing bait are common sights around jetties and willingly take whatever you throw.

Generally, when you think sight-fishing you think shallow, but that isn't always the case. The next two or three months are prime for slipping out through the jetties to target a variety of hard-pulling pelagics. When the weather and fish line up it is one of my favorite diversions from the heat of summer.

While skinny water sight-casting to reds and trout in the backwaters and on the grass flats is all about slipping around and being library-quiet, nearshore and beachfront fishing is more like rolling up on a frat party. In the back lakes you are searching for an individual target or perhaps a small pod of tailing reds. Nearshore is about throwing into the melee and knowing something will eat. The visual stimulus is off the charts when the feed is on.

The nearshore and beachfront is often overlooked as the offshore folks aim for the horizon. Quite often they are driving right past the feeding zone which could be along the edge of the rocks or even just past the third bar. It isn't always like that though, at times the best zone could be a couple hundred yards off the beach on out, two or three miles.

So what's out there? Kings, bull reds, Spanish mackerel, bonito and jacks are generally the ones causing the biggest ruckus. When you see the birds working or frothing whitewater, chances are you'll get your line stretched by one of these bullies. A variety of sharks will also get in on the act and are attracted to the feeding commotion. A good blacktip or spinner shark is a blast and will sometimes put on a show to rival a tarpon.

Speaking of tarpon, that was how I got started playing this game. I was going out with some serious tarpon hunters who would snub their nose to these "lesser" species. Personally, I like anything that'll eat a fly or lure and offers a visual target. Don't get me wrong, I'm always looking for tarpon when I'm out there but I certainly don't bypass a school of feeding bonito.

There are other less obvious targets in the nearshore this time of year as well. Tripletail and ling can be found around most anything that is floating. Everything from trash to sargassum. My largest ling was sitting under a Clorox bottle. I never pass a piece of trash without taking a swing past it for a quick look. Depending on how close the blue water has come in and what part of the coast you are on, these same floating fish magnets can also hold schools of dorado.

The most obvious floating fish attractors are shrimp boats. They'll often come right up to the surf zone this time of year. Everyone that has ever pointed a bow towards the Gulf already knows a culling shrimp boat is a prime target, but don't discount those that are lying at anchor during the middle of the day. Ling, tripletail and dorado are often lurking in the shade even when the cull isn't flowing.

The drill for this style fishing is fairly simple. I like to clear the jetties at daylight and start the hunt right there around the rocks. Depending on what the tide is doing there could be action right along the rocks or perhaps a hundred yards or so off the tips. It's all about the bait. Find the bait balls and the predators will be somewhere close. If the jetties aren't paying off I'll start cruising the beach looking for flocks of feeding birds. It usually doesn't take very long.

Once a feeding school is located, it is best to ease in on the trolling motor or try to set up a drift. Running the big motor to casting distance works every once in a while, but knocks your batting average way down. It's hard not to get overly anxious when faced with a crazy feed, but settle in and take your time. Most times they aren't going to shut off. You have time to do it right.

I'll usually stop a ways off and try to determine what I'm looking at before tossing something into them. Try to get a feel for the size of bait being chased and match it as best you can. And, if you can determine what is doing the eating, match the tackle to the predator. I like a good fight so I tend to err on the light side with tackle. Sometimes it gets me in trouble, but I'm still smiling even when a really big king runs off with my Spanish mackerel offering. Eh, it's just a fly and some leader.

If I'm doing a fly trip I'll have everything from a 7wt on up to a beefy 12. Most will have a short length of steel ahead of the fly to combat the toothy critters, but you also need to have something rigged with fluorocarbon. Tarpon, ling, dolphin and tripletail tend to shy away from steel. As for flies, most any baitfish imitation will work. Have a variety of sizes handy, some flashy and some more natural. You never know what they'll want on any given day. Big poppers and large shrimp patterns deserve a spot in your box as well.

Same general ideas for conventional tackle. A variety works best, but nothing too heavy. I want rods capable of casting a lure accurately and then properly working the lure. I see guys out there with beefy sticks trying to lob lures all the time. With a proper drag and good technique, most everything out there can be handled with at most a med-heavy popping rod. Most times I'll be throwing medium or med-light actions. Topwaters are by far my favorite for this style fishing, but there are times they won't eat up top. A big Rat-L-Trap or some of the smaller lipped trolling lures are killers. And never overlook the old reliable spoon.

On the rare day when the fish just won't come up and give themselves away, you can always try trolling while you look around. This is actually not a bad option on those dead-calm hotter-than-Hades days. It'll keep your crew fresh and probably draw at least a few kings.

Weather permitting I will be hitting the nearshore out of Port O'Connor as often as possible through August and on into the fall. If you're in the Aransas Pass/Port Aransas area, look up Capt. Dean Thomas with Slowride Guide Service. Further south, down Port Mansfield way, check in with Capt. Ruben Garza. Both of those guys are a blast to fish with and know the nearshore light-tackle drill very well.