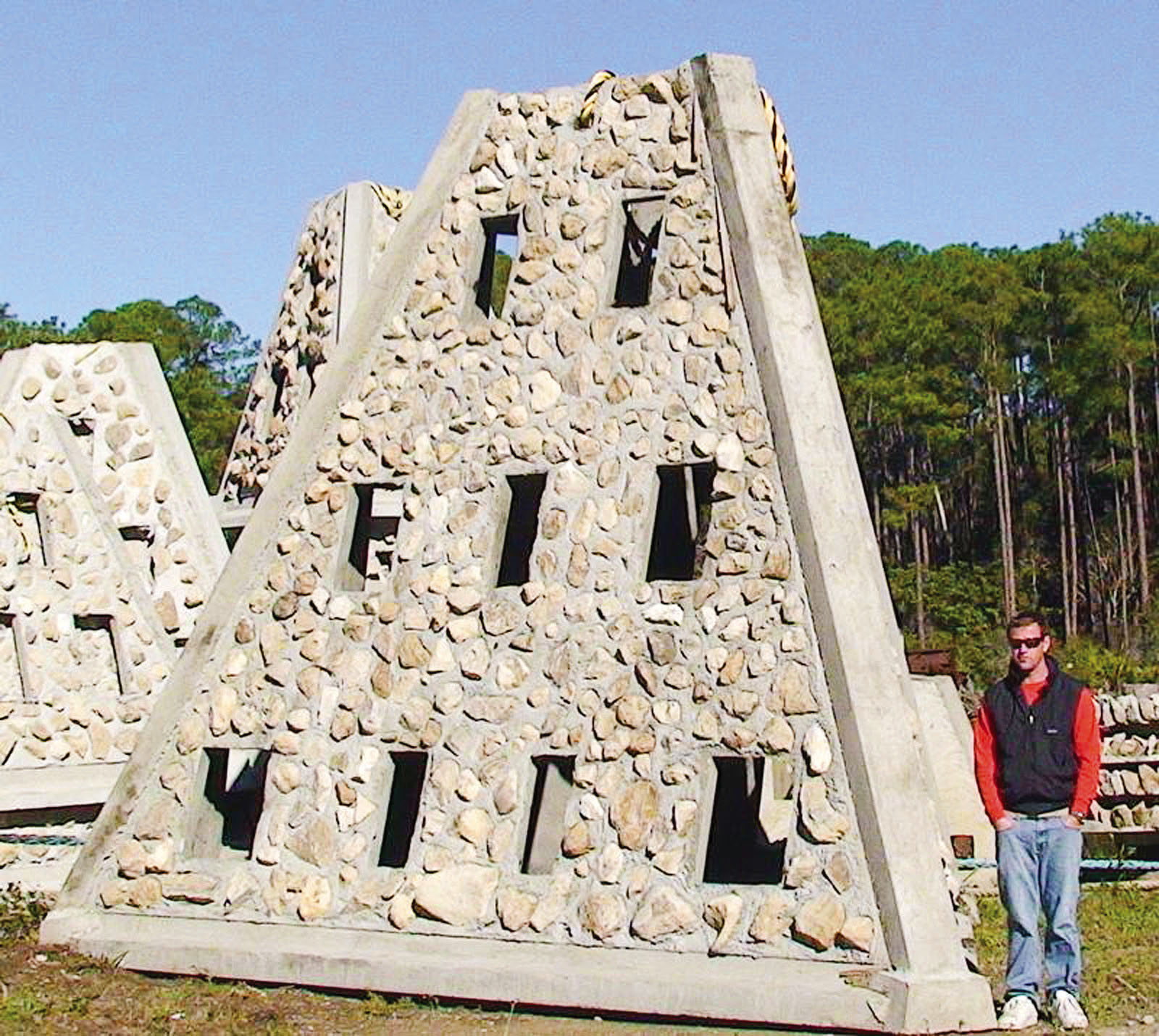 So-called “supper reefs” are much bigger than a standard reef ball, and incorporate natural limestone for better coral growth. Photo by Walter Marine.
It's no secret that Texas is woefully short of artificial reefs offshore, whether in blue water or within sight of the beach. Texas offshore anglers depended heavily on the offshore gas and oil industry to provide fishing spots for the past 50 years, and it was great fishing. But now that 1,000 platforms have been removed, and the feds have almost strangled recreational harvest of snapper beyond nine miles, where to fish? Especially in state waters, where red snapper fishing is allowed all year, but little fish-attracting structure exists.

What a difference between Texas and Alabama, in the Eastern Gulf. Forrest Gump's state, with about 50 miles of coastline, has nowhere near the fishable, continental shelf that Texas has. But they've allowed thousands of offshore artificial reefs to be built. Their offshore policy remains: Build it and they will come. Today, Alabama anglers catch the majority of recreationally caught snapper for the entire Gulf, and often within sight of land.

There are a few artificial reef sites off Texas, and even several shipwrecks. Texas dabbled in reef-making in 1979 by sinking nine Liberty ships offshore, sites that are mostly forgotten today. The Texas Clipper from Galveston was cleaned at great expense and volunteer effort, and sunk off South Padre Island. But the cost and time involved in cleaning these ships before sinking has become prohibitive. Huge Navy aircraft carriers, sold for a penny, are towed to Brownsville and cut up for scrap (and shipped into Mexico). Sinking ships for artificial reefs has now fallen from favor, because of toxic materials in each vessel.

What about all of those platforms removed from Texas waters? They were hauled away for scrap, as well. Many were dynamited loose from the bottom, destroying all fish within a fair distance, sometimes floating thousands of snapper with their eyes bugging out. A few Gulf platforms were even loaded onto barges and towed into Florida waters, and sunk 50 feet below the surface, ripe habitat for many fish today.

What's to be done in Texas? Offshore snapper fishing has hit a low ebb, but the situation should begin improving. CCA Texas is in the process of securing several 160-acre sites along the coast, and several have already received reef material on the bottom. They're concentrating efforts on state waters only, where Texas Parks and Wildlife determines snapper harvest.

"At Freeport's Vancouver site, we've donated $50K for a project there run by Texas Parks and Wildlife, says John Blaha with CCA. "The material so far includes 120 culverts, and also large granite rocks. At Port Mansfield, where fish are already being caught, we gave about $50K. That project has about 4,000 culverts.

"The site off Corpus Christi, we gave about $100K for that one, another TP&W project. It has 470 pre-built pyramids. We're also involved with a new site out of POC and we're committed to $100K, though permits for that one are still being worked on. We also contributed $200K to a new site off Matagorda; we're hoping to secure enough funds from the Deepwater Horizon restoration fund to reef the entire 160 acres there."

"On the upper coast they're permitting a site 160 acres between Galveston and Freeport. We already have donated material, big pipe structures that weigh 20 tons each.

"We've also been part of the Idle Iron issue. We're trying to build a feasible plan to make reefs out of that old platform material, instead of hauling them away. We want to bring different agencies together, to build a cohesive plan that is good for the ecosystem."

Tom Hilton also has a plan to build a great many artificial reefs along the entire Texas coast, but so far that hasn't happened and the cost will obviously be high. For quality fishing, you need a great many sites that can't be cleaned out each summer by fishing pressure. They would certainly offer good fishing during autumn or winter, when Texans are preoccupied with football weekends or with that deer lease. During those two seasons, you can launch and run only a few miles offshore, and may not see another boat.

"I call it the Texas Great Barrier Reef," says Hilton. "I proposed to build a 1-mile wide artificial reefing corridor along the entire Texas coast, positioned just inside Texas territorial waters. It ended up being 64 separated reefing areas, due to the requirement of avoiding conflicts with shipping fairways, anchorages, oil platforms, pipelines, etc.

"The concept revolved around providing more fishing opportunities for Texas recreational anglers close to shore and during Texas' 365-day snapper season. Creating close, inshore reefs would provide easy access to the fish. Not require a lot of time, fuel or expense and would jump-start coastal economies like nothing we have seen.

"People could go for a snapper run and be home for lunch. It would encourage people to take their kids, since they wouldn't need to travel so far to catch fish. It would be free from federal fishery management meddling, since it would be located inside Texas territorial waters. It would mitigate the loss of habitat we are now experiencing, with the removal of over 1,000 oil platforms since the BP oil spill. There would be a lot of positives."