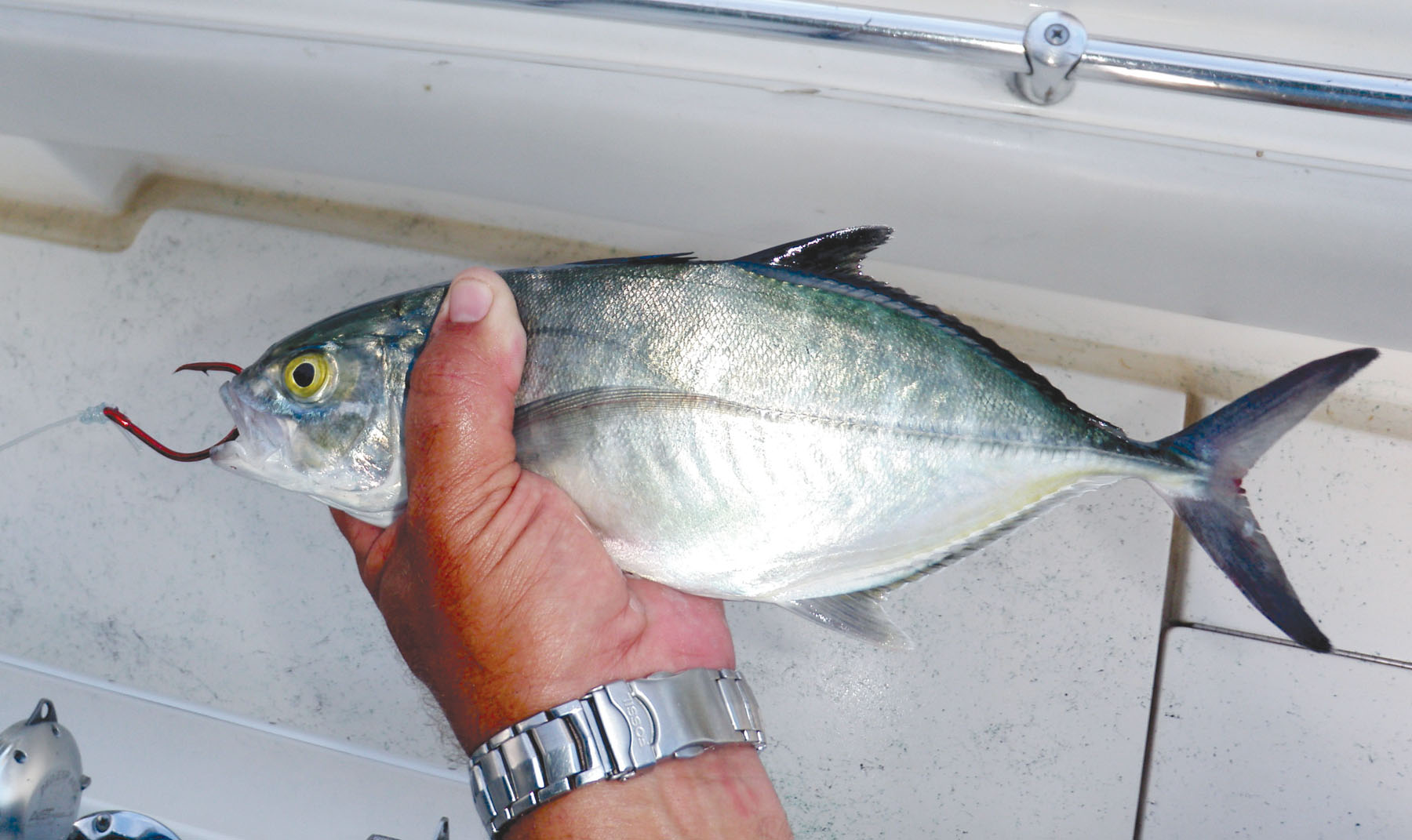 Blue runner – AKA hard tail – rigged and ready to be lowered.

For the first time in history, recreational anglers have been very anxiously awaiting the reopening of the greater amberjack season that has been closed June 1 through July 31, 2011. According to the data used by the regulatory agencies, recreational anglers overfished the greater amberjack quota back in 2009 and it is now payback time to allow the species to recover. Some salts, though, are having trouble understanding this year's closure as the Deepwater Horizon incident and the resulting fishing closures certainly kept us from overfishing them in 2010.

The Gulf of Mexico Fisheries Management Council presented a couple of options for public comment; one being to simply allow the season to run until the 2011 quota was fulfilled and then close it for the balance of the year. This we are told would have likely forced a closure of the greater amberjack fishery long about late July or sometime in early August. The premise of the other proposal called for closing the season during the two months of peak harvest - June and July - projecting that the season could then be kept continuously open for the remainder of the year without worry of overfishing the quota.

The proposal to close the greater amberjack season during June and July evidently appealed to many survey respondents who liked the idea of having at least one of the most popular bottom species (red snapper scheduled to run 48 days beginning June 1 through July 18) open all but a few days throughout the year. Basically if the amberjack season had remained open, we would have lost the opportunity to retain both red snapper and amberjack by the first of August. The public comment via email, letter and open testimony at council meetings largely favored the June-July closure. Thus, in the opinion of many, staggering the two seasons would allow extended opportunity and likely favorable economic impact to our coastal communities and local fishing related businesses.

Now that we have our amberjack back, it's time to go put a few on the deck. I am often asked to explain my strategies and tactics for targeting various species but the when-where-how of amberjack fishing probably tops the list. Greater amberjack are known to be almost suicidal one day and as finicky as you can find the next, and this adds to the confusion and mystery in targeting them. Many factors come into play such as fishing pressure, available forage, water clarity and current just to mention a few.

Many of these factors can be overcome with the simple approach of using tackle as light as possible for any given situation. I often fish live bottom areas with leaders as light as 80lb and sometimes as heavy as 500lb when pulling them away from deep water platforms and cut-off rigs. If they seem to be a little reluctant to bite, I will simply downsize until I get them to cooperate, using as little weight as I can get away with while still sufficient to overcome the pull of live bait being used and current.

Amberjack will congregate over and around just about any structure that will hold suitable forage, and although I have caught them as shallow as about 60 feet, I rarely see consistent success in less that about 160. They also seem to have a fondness for structure made of steel. Over years of fishing known wrecks, the steel-hulled boats seem to just hold them better as do platforms and cutoffs, with areas of live bottom running a close second.

When thinking about an area to target amberjack, it has been my experience that their Achilles Heel seems to be beeliners (vermillion snapper). Any place that holds beeliners will almost always have amberjack and, before it became illegal to use reef fish for bait, beeliners were hands down the best live bait for a hungry jack. Second to live beeliners would be blue runners and pin fish (piggy perch). Recently growing in popularity is the knife or butterfly jig. The jigs seem to work fairly consistently and with a high-speed retrieve they will spur a bite on occasion when the fish seem to be a little reluctant to cooperate, or in a location that has seen a lot of fishing pressure. My reservations on the jigs are twofold. They are expensive and they don't seem to consistently catch the larger jacks. I usually consider them as Plan B and almost always begin my day with live bait.

Rigging for amberjack leans more toward personal preference that any one method proving more successful than the other. I will use a variety of leader configurations with what I call a sow rig on lighter tackle over live bottom. The sow rig consists of a leader about six feet long with one or two egg sinkers located just off center and the hook on the trailing end. The weights, if placed just slightly closer to the hook rather than the swivel, will cause the bait to be less likely to wrap around the leader or main line if it spins or spirals on its way down. With larger leader material used for fishing heavy structure such as standing rigs, I prefer a leader with a large single drop loop, placing the bait in the center, and a suitable bank sinker at the bottom. I will often attach the weight with a short piece of lighter line of about 40lb test. This lighter line will allow the weight to easily break away from the main leader if it becomes entangled in the structure.

Amberjack didn't earn their nickname of rig or reef donkeys by being pushovers, hence the common approach of trying to entice them to come to you rather than dropping all the way down to them. Begin your drop as high in the water column and as far off the structure as you can and then slowly work your way closer until you get the fish to cooperate. This method will afford you a little extra time to get his head turned and coming your way before he has you tangled in his nest.

Success with these brutes is sometimes every bit as much a product of blind luck as it is skill. As much as I like to believe that I know what Im doing, there is simply no single definitive method or tactic for consistently putting them on the deck. I take every opportunity to try new approaches and refine what the fish have taught me.

The undeniable fact of fishing for large amberjack is that you win some and you lose some. Most important is to keep trying new approaches and keep sending those baits down. Your success rate will increase with every lesson and every whipping the truly big ones put on you. I look forward to this month's reopening of the greater amberjack season and hope that we all enjoy many safe and successful days on the water with lots of jacks landed!