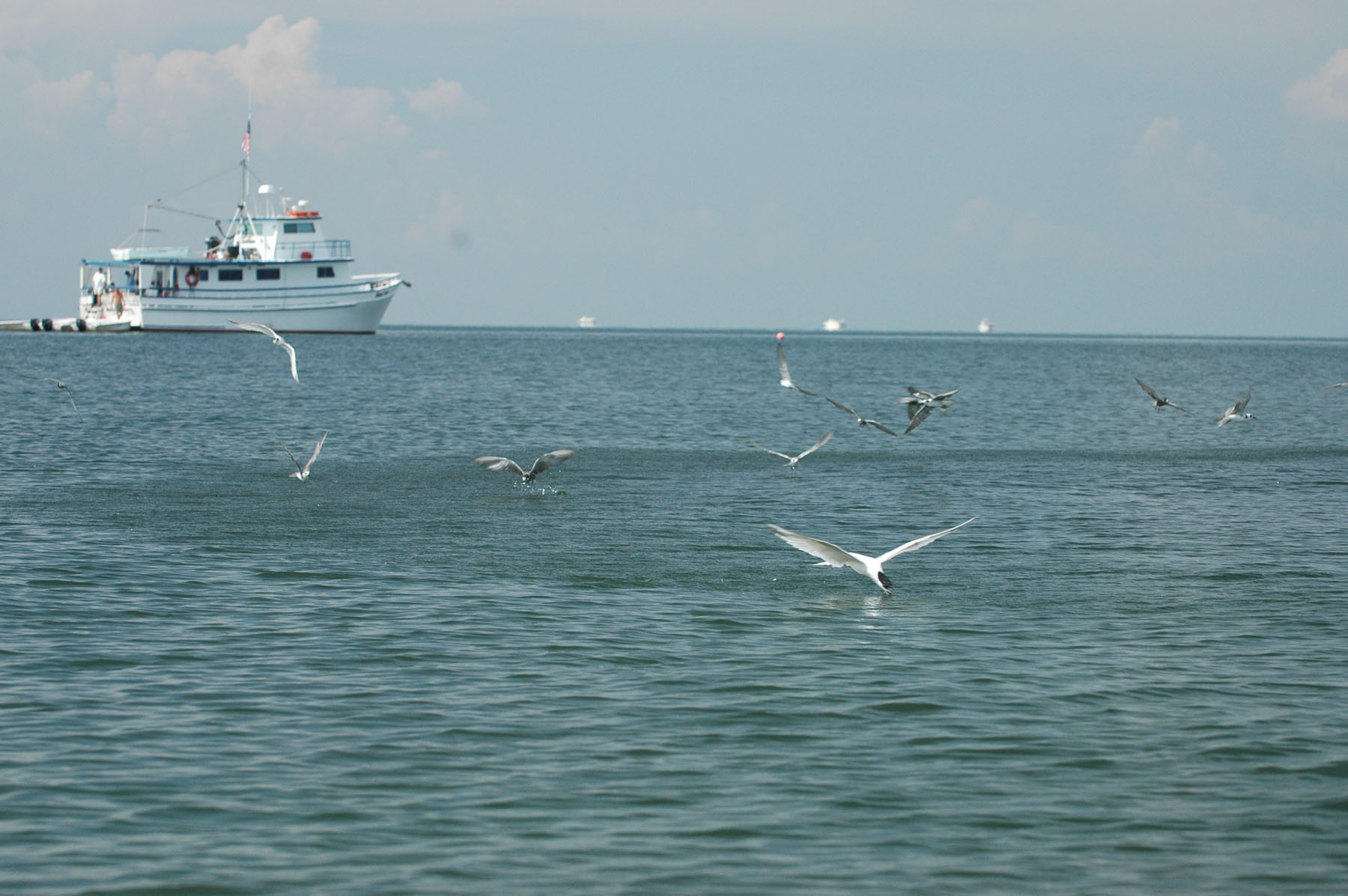 The Chandeleur Islands have long been a preferred destination of Texas anglers looking for adventure and top-notch angling. As a teenager the islands always held a special place in my fishing-obsessed mind. I first heard the glory of the Chandeluers during the late-seventies and early-eighties working at Marburger's Sporting Goods. I still recall the customers coming in with a shopping list provided by my fishing idol, Rudy Grigar. They'd clean the pegs holding the gold Johnson spoons and fill their baskets with MirrOlures and Kelley Wigglers. I longed to join them, but as a kid making minimum wage I might as well be wishing for a trip to Alaska. I couldn't afford the stockpile of lures much less the cost of a guided trip. Around 1982 I almost got my chance when Mr. Marburger set up a sales competition among the store employees. Whoever sold the most Ambassadeur reels would win a free trip. I lost out to the store manager, Lonnie Smith, by only a few. Thus my trip would have to wait many years.

During my 20's and 30's I got busy with a career and raising a family. I still thought of the islands and upon reading Rudy's book, Plugger, I had a renewed interest. I vowed to make the trip happen. Then a few years ago I met Captain Troy Fountain at the Houston Boat Show. Troy runs Chandeleur Charters out of Biloxi, Mississippi aboard his 65 foot boat, Double Trouble. A couple months later I was on my way. And the islands didn't disappoint. The fishing was fantastic and Captain Troy's crew made the trip most enjoyable. In the following year I managed to sneak aboard the Double Trouble a couple more times and loved every minute of it.

The Chandeleur Islands have an interesting history dating back approximately 3000 years. It is a history that is in peril of coming to an end within our lifetime. The islands began as the outer edge of the Mississippi River delta back when the river had a more easterly flow. Around 2000 years ago the river began to change course and migrated west. In time, the marsh behind the outer beach sank into Breton Sound leaving a long and graceful curve of a nearly unbroken barrier islands.

The islands belong to Louisiana even though they lie much closer to the Mississippi shore. I've never been able to find any verification, but the story I've heard regarding this is another chapter in the area's colorful history. Apparently there was some dispute between the states regarding where the state line should fall and to whom the islands belonged. To settle the dispute a whiskey barrel was set afloat in the Mississippi River. A floating party followed the barrel on its course out into the Gulf of Mexico. By chance, the wind and currents pushed the barrel eastward between the north end of the Chandeleurs and the coast of Mississippi. Thus, the islands became a part of Louisiana.

In the 1800's the island consisted of a fairly large land mass. It is hard to imagine, but there were woodlands, farms, and fishing villages scattered along the length of what has now become little more than a large sandbar. In 1904 President Theodore Roosevelt declared the area a protected bird reservation because the islands' brown pelican populations were being decimated by plume hunters looking for fancy hat feathers. Breton NWR became the nation's second preserve in the National Wildlife Refuge system. Though he created many other refuge areas, this was the only refuge ever visited by President Roosevelt.

A strong hurricane in 1915 swept over the islands and wiped out the settlements. The area has remained for the most part uninhabited since that time. Today the Chandeleurs are listed as a Class I protected refuge and can not be disturbed. Visitors may roam and explore the islands, but no overnight camping is allowed. Thus the emergence of operations such as Captain Troy's where large motherships are used as a base for multi-day fishing trips.

Over the decades many storms have struck the Chandeleurs with devastating power. Each time the unique currents and positioning of the islands has allowed Mother Nature to replenish the beach and marshes with sediments from the Mississippi River. A huge upwelling of currents along the continental shelf colliding with the outflow of the river combined to rebuild the barrier island. The effects of the river water were evident in the area based on the presence of oyster beds which require a mix of fresh and salt water to thrive. The health of the islands is vital to the protection of the Louisiana coast during times of storm surge. This important protective barrier appears to be in severe jeopardy at present.

Historically the time between storms affecting the area has been sufficient to allow the natural rebuilding process to take place. A 1980 survey found that the islands were retreating towards the mainland at a rate of 20 to 30 feet per year. At the time, geologists estimated that the islands would last another 300 years. However, since 1998 the hurricane activity has apparently been too much to handle. The area has been heavily affected by seven storms in eight years. The most recent storms being Hurricanes Ivan (2004), Dennis, Katrina, and Rita (all in 2005). With each successive storm the erosion has been greater and the recovery slower. During Katrina the area lost approximately 50 percent of its land mass. And it is showing little signs of recovery.

Geologists with the USGS have found disturbing evidence of landslides all along the continental shelf adjacent to the Chandeleurs. These slides have disrupted the flow of currents and thus the replenishing sediments necessary to rebuild have been redirected. Without the sandbars and beaches the relentless pounding of ocean swells is quickly eating away at what is left. The current rate of retreat since 1996 has been estimated at 300 feet per year. So don't count on your GPS when navigating through the islands. Waypoints I had marked as marsh are presently in the Gulf of Mexico. Scientists now fear that the islands will be completely submerged within the next decade.

I recently witnessed the effects firsthand on my first trip back to the Chandeleurs since the stormy summer of 2005. I'd read all of the rumors on the fishing websites immediately following Katrina stating that the islands were gone. On the long boat ride out I wondered what I'd find. Well it's bad, but not that bad. The beaches and sand dunes simply no longer exist. On previous trips I had great success fishing the surf side of the islands. There were beautiful sand dunes towering 15 to 20 feet and a wide, gently sloping beach. The first gut was deep, but the first and second sandbars were easily visible. Behind the dunes was a vast marsh network where I explored in my kayak for hours. I was deeply saddened when I approached the islands from the marsh side. There is very little left of the marsh. In fact I found a mile wide cut to the open gulf where I had enjoyed some classic marsh redfishing a few months prior to Katrina. While running the skiff towards the back side of the islands I could easily see the tops of the waves in the gulf. The point of land was perhaps four feet and most was much lower. The swells from the Gulf of Mexico were crashing onto a barren, narrow shell bank. As I stood atop the shell there was no first or second bar, only deep open water. It is easy to see how even a modest storm will have no trouble cresting the entire island, wreaking even more havoc.

And now for the good news. The fishing on this last trip was superb as always. The lush grass beds have recovered and the rafts of baitfish seem to indicate a healthy ecosystem. Our crew consisted of several husband and wife couples. Many of the women had little fishing experience, yet they all caught fish. My wife and I had no trouble catching dozens of trout on a variety of lures. One of my buddies stuck with his topwater throughout the day and still managed good numbers of solid fish. The trout seemed to be a good bit larger than in years past. The Chandeleurs have always been known for big numbers of rather small trout. Our party caught plenty of solid specks in the two to three pound range with a few pushing five pounds and more.

So if you've always wanted to experience the Chandeleurs and have been putting it off for one reason or another, I'd suggest you get busy. Give Captain Troy a call. He'll take good care of you and your party with great food and comfortable accommodations. The fishing is as good as ever, but who knows for how long. As I type this, tropical depression four just formed in the Atlantic and another area of disturbed weather is making noise in the Caribbean. The next storm to slam this special place could possibly be the last and you'll never get another chance. As I was leaving the islands I had some mixed feelings. While I was concerned at the very real possibility I might never see them again, I was pleased to know I've had the great fortune of spending some quality time in this unique environment.