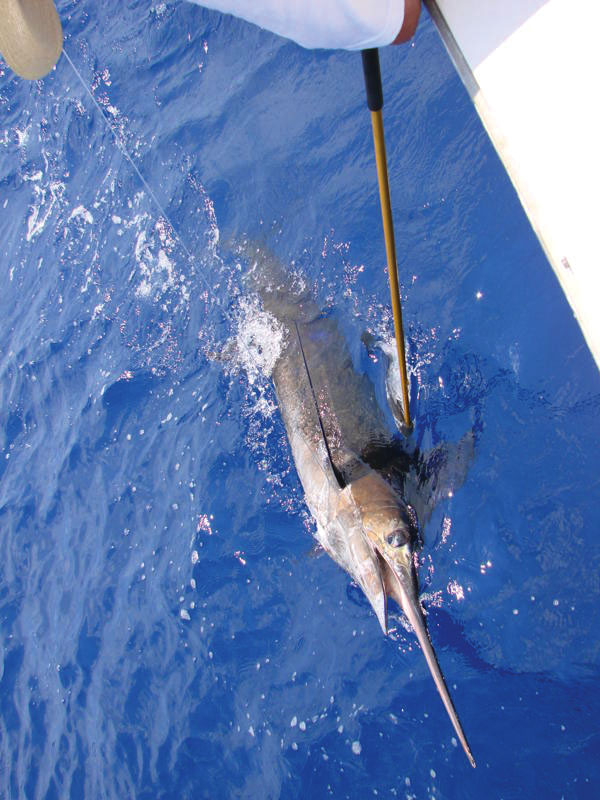 With summer fast approaching, we begin to look forward to the ability to target pelagic species like dorado and kingfish. We will see more wahoo and sailfish moving in shallower where they can be regularly targeted by the average angler with limited fuel capacity. All of these fish can be found in and around rips, weed lines, and an array of flotsam.

Rips are associated with the edges of opposing currents and usually have a noticeable temperature and water clarity change as you cross from one side to the other. Rips will trap anything floating, especially sargassum, forming what many call weedlines. These sometimes massive mats of vegetation are a critical habitat for many marine species including numerous fish that rate high on a fisherman's list.

Weed lines attract a variety of baitfish that can usually be caught very easy along the edges. I regularly fill my livewell on one or two stops in the morning on surprisingly small patches. With the amount of bait present, weed lines are a natural gathering place for wahoo, dorado and other pelagic species looking for easy forage and also to simply take advantage of shelter on the open ocean.

Much of this is well known by avid fishermen, but most don't know that the South Atlantic Fisheries Management Council has taken measures to preserve what they call "essential fish habitat" by creating the Sargassum Fishery Management Plan, thus placing restrictions on the commercial harvest of sargassum. Approved in 2003, the management plan protects sargassum throughout the blue waters of the South Atlantic and Gulf of Mexico. Commercially harvested sargassum is used in fertilizer and dietary supplements in animal feed.

The ongoing protection of this fish-holding algae (it is really not a weed at all) is definitely important to all within the recreational fishing community, and another example of how complex the management and conservation of our fisheries has become. Just how many of us have ever given a thought to what the ramifications might be if this floating habitat was lost through over-harvest?

While the National Marine Fisheries Service is tasked with protecting this fish-holding resource, it leaves you and I free to fish it at every available opportunity. There are many ways to approach a weed line and all can be productive. On a given day or weed line I may catch fish with a combination of tactics.

For round patches of weed with little to no obvious current change, I will often ease up, chum along the edges, and then just wait to see what will come up to investigate. This approach will not only pull in curious dorado (also called dolphin fish) but often produces ling and occasionally a tripletail or two. When using this approach I will pre-rig at least two rods with a fluorocarbon leader and a 4/0 to 6/0 live bait hook. When fish swim into the chum, simply bait the hook with the same chum that attracted them and drop it in. With school-sized dolphin you can often boat multiple fish before the bite falls off.

On many occasions this approach will draw larger dolphin that will hang below the smaller ones feeding at the surface. These larger fish will usually be finicky, appearing sluggish and disinterested. This is where you change tactics. I have caught many large dolphin that I first saw under my chum by easing away from or down the weed line and rigging a few Jet Heads or Resin Head trolling lures. Giving myself enough room to put out the spread and settle into a good trolling speed of about seven to eight knots, before passing the area that I had been chumming. You will often see a knockdown on the very first pass. If not, you know he is there so don't hesitate to work the area again and adjust your speed. I will regularly pull baits close to ten or eleven knots before I see the fish showing interest.

On weed lines along a rip with obvious current changes I will usually start with a trolling spread. These are normally the longer more narrow lines that often have a noticeable color or clarity change on either side. Start on the side of the rip with the best water clarity, it will usually produce the best results. You will find that trolling with or against the current can make a difference, but for starters it's just a coin toss.

I often get a surprised reaction from people when I tell them just how far back I pull a spread. Personally, I like my spread positioned well back and away from the outboard exhaust. I regularly pull them five to even six wakes back, rarely inside of three wakes. I also find consistent success with as little as three baits; staggered, with the shortest line closest to the weed line. I prefer a simple, small spread and rarely use outriggers. This gives me the ability to easily make turns and quickly reverse direction. It also allows me to easily swap sides of the line through small breaks in the weed if necessary. The most important aspect to me is trolling speed and running your lures in water clean enough that they can be seen from below. So don't think it requires outriggers and complex spreads to produce fish.

With summer quickly approaching, we will see the sargassum begin to arrive. With it will be the highly prized dolphin, wahoo and even an occasional billfish. Fishing these weed lines is one of my favorite pastimes and such a dynamic fishery that no approach can be considered the rule. We can only start with a tactic or style that has proven to produce fish in the past. When it fails us we have to tweak it to that day's conditions until it works and then file the lesson in our mental Rolodex for future reference. Therein lies the biggest secret to consistently catching fish.

A good fisherman has much that he can teach others. A great fisherman realizes there is much he can learn from the fish and never misses an opportunity to be taught.