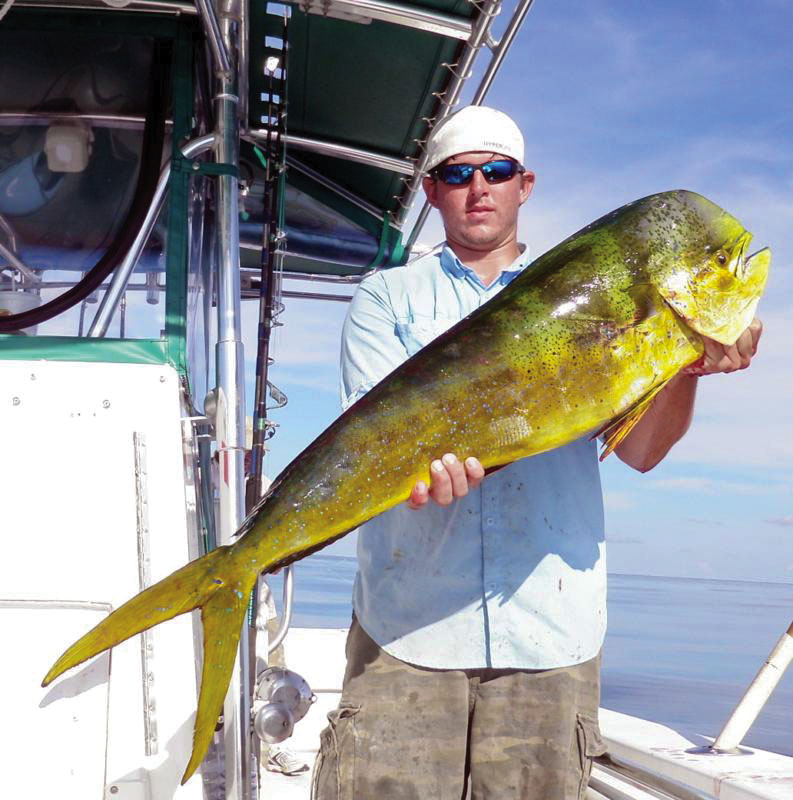 With winter weather keeping us at bay (pun intended), I can't help but to reflect on this year's turn of events. The Supplemental Red Snapper Season was a complete success in my opinion and for about half of it the weather was fairly cooperative. Our late summer slump in the amberjack action picked up about the time the snapper season opened to give us some fantastic fall fishing. The lack of fishing effort due to the oil spill also held off the early closure of the amberjack season allowing us to access them longer than originally expected.

I would have to say the largest surprise with the fall red snapper fishing would have to have been the average size of the fish. We were seeing fifteen to eighteen pound averages with many fish over twenty pounds. It was not just the guides that were landing these fish; I was seeing it from just about every boat that pulled up to the dock. Although this was great for those of us that were able to take advantage of them, I can't help but wonder how the National Marine Fisheries Service will figure these daily landings of such large fish into their models and will it drive up the average size of the fish caught, only to push us close to overfishing them for yet another year? Only time will tell if it has any effect on next year's season.

For the most part the fall fishing was fairly predictable, with a couple exceptions being our dorado and blackfin tuna. Many of us are accustom to targeting the blackfin behind the deepwater shrimp boats late in the year, but they have been difficult to find in the usual large numbers, if not just downright nonexistent at times. Although I received some decent reports on them from the lower Texas coast, those of us in the Freeport/Galveston area saw them in limited numbers to say the least. The dorado were not as bad, but never seemed to show in the numbers that we are accustomed to seeing. The downturn of these two fish over the last two years leads me to wonder if we are seeing the effect of the El Nino weather pattern we have experienced recently and its suspected impact on fish distribution, especially along coastal regions.

Even with the unpredictable weather patterns and changing temperatures, offshore fishing in December is alive and well off the Texas coast and as the days shorten and the temperatures fall we will see some changing but predictable patterns with many offshore species. The least predictable aspect is obviously the weather, and although our fishable widows are limited and short, the action can be hot for those who can take advantage of them. The Red Snapper Season may have come and gone, but the vermillion snapper fishing is going strong. Most scientists will tell you that snapper, being a reef species, will not migrate but most fishermen know that they can be found during the winter in places that they did not exist six months earlier. With the vermillion snapper you can expect them to move shallower this time of the year, allowing you to target them without running quite as far offshore. Although they will still be where you found them in the summer, I will consistently find them in fishable numbers this time of year as shallow as 140 feet. And if the bottlenose dolphin will leave you alone, they seem to be willing to rise higher in the water column making them even easier to target.

The ever-present kingfish have left their shallow water haunts , and although I suspect that many migrate south toward Mexico, many will also congregate over large live bottom areas in excess of about 180 feet that will sustain them throughout the winter. Stetson Bank is one area that will hold large populations of kingfish well into the late spring and is a popular winter location for many fishermen. They will seem to be a little deeper than seen in the summer months, usually requiring you to drift your baits a little deeper or use trolling bait that dives, rather than one that runs just under the surface.

One of my favorite winter fish is the scamp grouper, as with the others they can be targeted in the warmer months with regular success, but nothing like they can be in the winter. These fish are prized as table fare and will congregate in large numbers around deepwater structure such as oil rigs and cutoffs. Just about any rig or reef area that has been built with Rig Jackets in excess of 250 feet will hold scamp grouper in the winter months like at no other time of the year. Target these fish with live pinfish or diamond jigs, at or near the bottom, or mid-way down the water column as close to the rig leg as you dare to fish.

Although the fickle winter weather will keep most of us in port dreaming of warmer and calmer days ahead, there is a great fishery to be experienced when that occasional calm day occurs. Just always remember that whether the weather is perfect or not; there will be days when the fishing will be better than forecasted and others when it will be worse. Either is far better than just staying home.