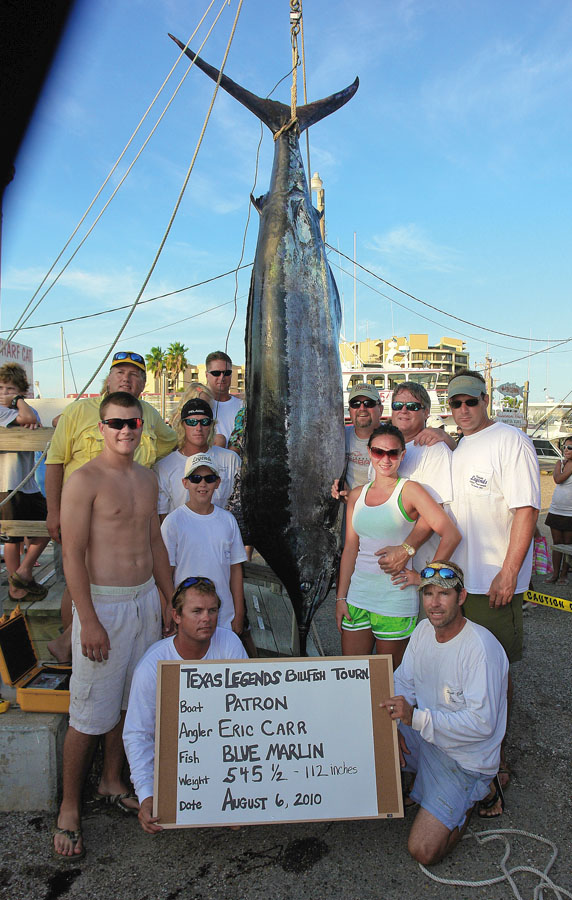 The 5th Annual Texas Legends Billfish Tournament was a big success this year in more ways than one. The field of sixty-seven boats and boat pools worth over $729,000 was a great start. The weather was very cooperative with calm seas and clear skies. However, the real success was the fishing, in particular, the arrival of a large number of white marlin and sailfish along our coast. This year white marlin dominated the billfish released, followed closely by sailfish. The total catch was 52 billfish, including 8 blue marlin, 23 white marlin, 21 sailfish and 1 swordfish. Blue Marlin were hard to come by, but the largest blue marlin ever weighed in the history of the tournament came in the first day. Tom Shumate's 67 ft. custom sportfisherman Patron boated a 545 lb. blue marlin early Friday morning and it was enough to earn them first place and the perpetual Bob Byrd Memorial Championship Trophy to keep for one year. The Patron also received the Alfred Glassell Memorial Trophy for the largest fish caught in the tournament.

Contestants battled off-color water and high sea surface temperatures on the upper coast, but along the middle and lower coast, fishing was red hot! Large numbers of white marlin showed up with plenty of sailfish to keep anglers busy and crews working hard to build up video release points. The number of white marlin released compared to an average year was astounding. Many boats released multiple whites and had strikes from plenty more. Port Aransas /Rockport based boats swept the field to win all four places this year. Gary Edward's Let It Ride came in a close second with three white marlin and three sailfish released. Third place was Dennis Wilkerson's Tico Time, edging out Bert Steindorf's Bandit which came in fourth place. Both boats caught a blue marlin, white marlin and sailfish, but the Tico Time released all of their fish before Bandit, thus winning on earlier release time.

In the fish pools, the largest yellowfin tuna was a 163 lb. beast caught on the Happy Hour. Mo Azul weighed a 125 lb. and Sea Mixer a 107 lb. yellowfin. The largest wahoo, caught aboard the She Bangz weighed 57 lbs. and was followed by a 48 lb. on the Double Trouble. In the dorado pools, the largest fish was 38 lbs. caught aboard the Reel Attitude. The Rhumba weighed a 36 lb. followed by the Incognito with a 35 lb. fish. The Bandit scored again in the swordfish pool winning with a 106 lb. swordie, the only one brought to the scales! Another notable catch included a 345 lb. blue marlin, caught aboard the Uno Mas, which got tail-wrapped and came up dead. It met the length requirements for federal law, but did not meet the tournament's minimum 102" LJFT short length. It was unfortunate, but still a very nice fish.

The large numbers of white marlin being seen this year are a good sign that these fish may be in better shape as a population than previously thought. Recently, they were actually considered for the endangered species list. So please don't kill whitey! For that matter, it's a good idea to let all billfish go unless you are fishing a tournament or they are large enough to be a potential record. Before the summer is over, get your ballyhoos out there and take advantage of the bite!

White marlin and sailfish are a lot of fun to catch on lighter tackle, so keep it light, use light leaders, circle hooks, fresh bait and have a blast! Please practice releasing these fish quickly and with the least amount of trauma. Also, remember, Federal Law prohibits removing a billfish from the water if it is intended to be released. To find out more about big game fishing in Texas, visit us at our Fox Yacht Sales - Seabrook office at Tops-N-Towers. At Fox we have an extensive inventory of brokerage boats and we are the exclusive Texas dealer for Jupiter and CABO Yachts.