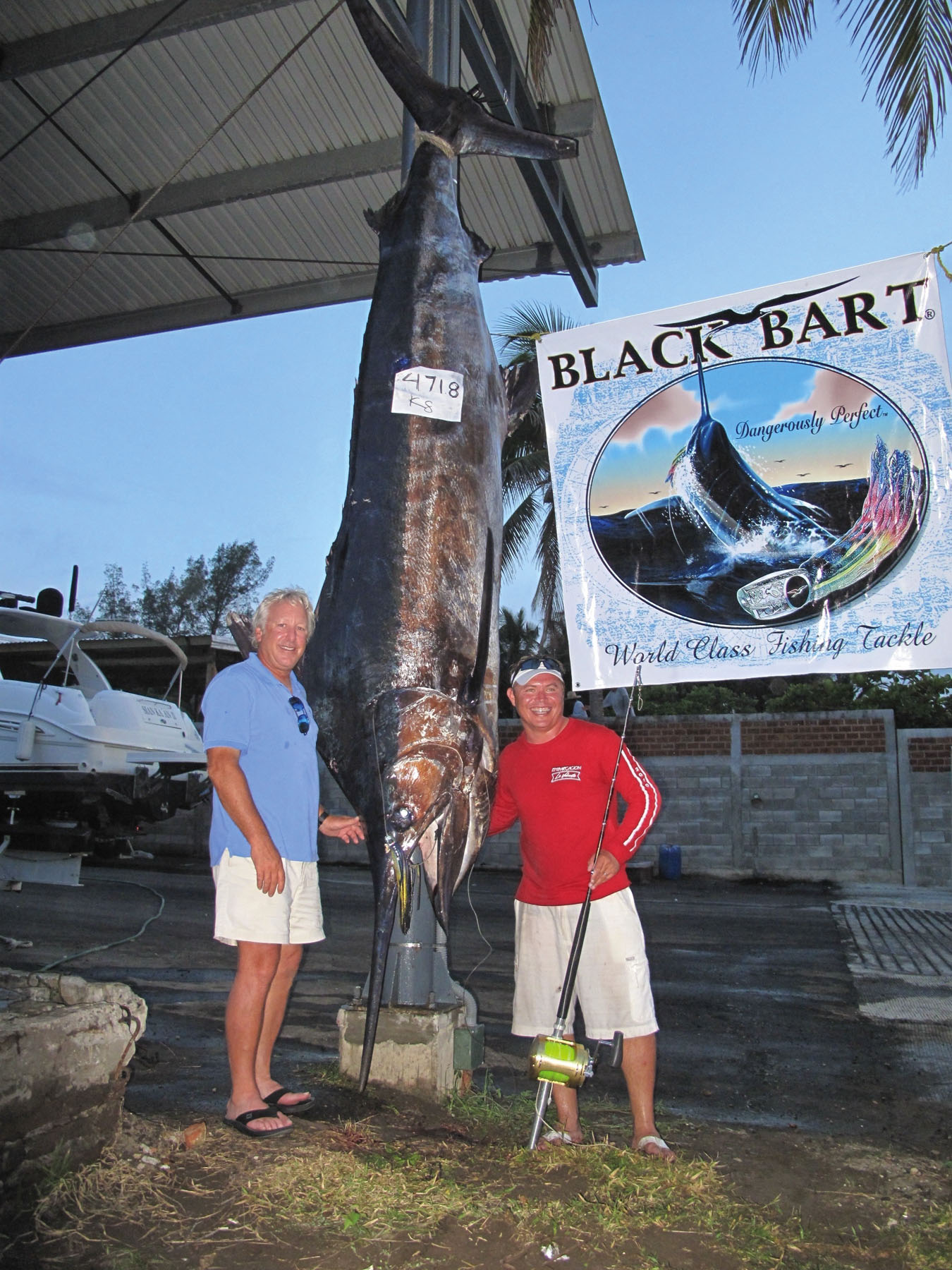 Jack Tullius of Black Bart Lures and proud “grander” angler, Francisco Iniquez.
Veracruz is famous for Spanish galleons that carried New World treasure back to Spain. Steeped in history and myth, Veracruz is becoming known for a new kind of treasure - big blue marlin. On June 19, 2010 the first grander blue marlin, (over 1,000 pounds), was caught in the Veracruz Canyon. Nestled in the Southern Gulf of Mexico, it is a fascinating destination for fishermen interested in fishing a new location with fewer boats and potential for big fish.

In 2001, Adrian Ponce de Leon arrived in Veracruz, saw the fishing potential and opened El Pescador Tackle Shop. It wasn't until then that big game fishing there became popular. Adrian is a very driven man and you will not find a more dedicated big game fisherman anywhere. His enthusiasm is addictive and soon most of the prominent fishermen in Veracruz were fishing for tuna and marlin. In his quest to learn everything about big game fishing, Adrian became very good friends with Jack Tullius, of Black Bart Lures. The ever-courteous Jack set Adrian up with the right tackle and then mentored him on rigging his equipment professionally. The results can be seen today.

Many blue marlin and tuna are caught every year in these waters including an 806-lb and a1038-lb blue marlin on lures and tackle rigged by Adrian. The main hurdle for visiting fishermen is the lack of a good deep-water marina. The Club de Yates (Yacht Club) in the main harbor has moorings and fresh water, but no fuel. Just south of town, the river entrance at Boca Del Rio is too shallow for most large sportfishing boats. This is about to change though as five new marinas are under construction. One of the premiere marinas will be at the Playa Conchal Resort. This first-class marina is scheduled to open in spring 2011. The potential for more big fish being caught in this area will increase when these new marinas become available.

The 9th Annual El Pescador Marlin Tournament was held June 17-19, 2010. The weather was a little unsettled the first day for the 25 boat field, but after morning showers the seas subsided and the weather was perfect. A semi-submersible, located about 45 miles southeast got about half of the fleet's attention, but the Veracruz Canyon, only 20 miles offshore, ended up being the place to be. Two identical blues were caught the first day, both weighing 128 kg. The rig also produced a few yellowfin and that was about it. The second day was also rather slow, but as more boats moved into the canyon things started to heat up. Several blues were lost (along with a rod and reel), but as a 32' Donzi, owned by two-time tournament winner Rafael Morales, trolled along the canyon wall, he was shadowed by a small boat that ended up getting the bite of a lifetime. The smaller boat hooked up and called in that they had a big fish on. The owner of the 21' Trophy was new to big game fishing and had never caught a blue marlin or fished in a marlin tournament. His luck and experience were about to change.

A dark shape appeared behind one lure, then dropped back, and reappeared behind another. The fish accelerated, striking the lure three times with no hookup. The mate suggested the captain speed up a little. As the boat rose on plane, the marlin hit and was hooked solid game on!

The experienced mate onboard knew the line was disappearing much too quickly and turned the boat around to run at the fish. They gained line at a remarkable rate and within 20 minutes the big fish was near the boat. The mate asked the owner to get the gaffs and was terrified when he realized the only gaffs aboard were homemade affairs for kingfish. He radioed his brother on the larger Donzi nearby and they decided to transfer the angler to that boat for a better chance. Capt. Rafael told his mate to get the flying gaff ready, only to be informed it had been left it in the truck that morning!

Undaunted, Rafael kept the heat on the fish and after an hour it came up jumping. After a total of three hours the fish was finally at the boat. The marlin was very tired and did not give them much trouble on the leader. The fish was caught on a small Black Bart lure, confirming the old adage "elephants eat peanuts", proving you don't necessarily need big baits to catch big fish!

The fish was very well proportioned and it wasn't until hung on the scale did we realize just how big it truly was. When the fish hung freely, the electronic scale settled at 471.8 kg. After consideration for the rope, the weight was established at 1038.2 lbs. An awesome fish anywhere and the third largest blue marlin ever caught in the Gulf of Mexico. It was an incredible fish and an incredible accomplishment. Sure, there was a lot of luck involved, that always helps, but a lot of credit has to go out to Adrian at El Pescador Tackle and his mentor Jack Tullius. The excellent tackle and rigging he does for his customers assures they have the best possible chance for success. Francisco Iniquez caught this magnificent fish, but part of that catch belongs to Adrian and Jacktrue pioneers in a modern day fishery.

Are you ready for a billfish tournament? Join us in Port Aransas, August 4-8th, for the Texas Legends Billfish Tournament. Also, the Texas Tuna Mania and Swordfish Championship was rescheduled to August 19-22, due to Hurricane Alex. For information, go to www.txlegends.com and www.tunamania.com. You can also find out more about big game fishing by visiting Fox Yacht Sales - Seabrook office at Tops-N-Towers. At Fox we have an extensive inventory of brokerage boats and we are the exclusive Texas dealer for Jupiter and CABO Yachts.