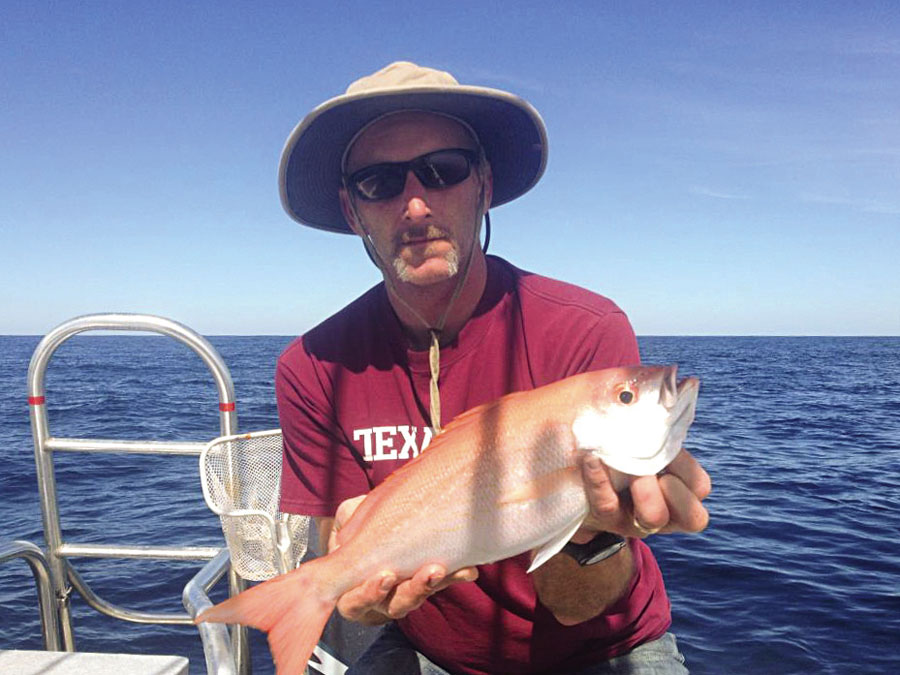 Fighting mad about red snapper and asleep at the wheel on beeliners.
Red snapper are enormously popular all across the Gulf of Mexico. Over the past several years any discussion you're likely to have engaged in with avid offshore fishermen, the topic no doubt eventually turned to red snapper. Depending who was involved, the conversation might have become heated when the management of the snapper resource surfaced; or perhaps it was termed "mismanagement" as a growing majority are fighting-mad.

Blame has been levied against the Gulf of Mexico Fishery Management Council. Some blame the MagnusonStevens Fishery Conservation and Management Act. Some point (or wave) the finger at the commercial fishermen. Still others have concocted longwinded conspiracy theories involving federal resource managers and certain environmental organizations. Last but not least is a group that's been banging a drum for better data.

While all these issues may or may not have merit, I personally see much of the mismanagement of our Gulf of Mexico fisheries arising from a combination of factors.
First, I believe the MagnusonStevens Act has some serious flaws; i.e. unreasonable and unrealistic stock rebuilding timeframes, that work very well for fish but not so well for fishermen.

Second is the so-called data the managers reference during decision making. The extrapolation process they use to formulate stock assessments and actual landings has been challenged to no end. As a matter of fact, the Louisiana Department of Wildlife and Fisheries recently offered hard numbers gathered during dockside surveys that showed the feds were overestimating the number of fish landed by somewhere around 70%. How's that for over-guessing?

As you delve into the Fishery Management Council you find that the internal politics along with the personal and individual state agendas render them all but incapable of making much headway when it comes to better managing your fisheries.

And before you throw your hands up in disgust and decide to play golf instead, you need to stop and consider a very important fact.

Beginning in the late 80s and early 90s we all realized red snapper were in trouble. I doubt you could find a single veteran recreational angler of the mid-70s to 1990 era who would not agree totally or in some part. The scientific data of the time showed it and the recreational fishermen saw it in their catches. All things scientific as well as anecdotal pointed to the fact that something had to be done to help the fishery recover. Thus the recreational and commercial fishermen's access to red snapper began to be restricted.

I have a feeling that when the majority of recreational anglers can clearly see that we are taking more fish than a fishery can sustain, we are all for laying off them. But where are the commercial fishermen in thiswhat should they be doing? And if restrictions are to be imposed, should they not be imposed equally?

The vermillion snapper (beeliner) fishery comes to mind here. The recreational limit on beeliners was just recently slashed from 20 per day to 10. You might say 10 is still a lot of fish but let's look a little deeper.

The Gulf of Mexico vermillion snapper fishery has long had an annual recreational quota of three million pounds and it has never been exceeded. The recreational average has been about 800,000 pounds. In 2010, the year of the Deepwater Horizon disaster, recreational landings exceeded one million pounds, but only that one time.

To add fuel to the fire; there is no current stock assessment of this fishery and no scientific data I can access that would point to a decline. Yet the management council felt it necessary to cut your limit by half. And you, the recreational fisherman, are the minority user by far in this fishery that is shared with commercial interests.

Now you're probably curious as to whether the commercial users were treated similarly. The answer to that is no. They will continue to operate under no annual quota, no trip limits, and no seasons. The commercial fisherman may fish for vermillion snapper any day they wish and legally take as many as their boat can hold.
As I watched this fiasco unfold over many months and multiple Gulf Council meetings, something struck me as very odd.

The recreational regulations were changed based on anecdotal information and public testimony provided by a small number of commercial fishermen and fish house operators. This small group succeeded in having your limit slashed by a whopping 50% while they will continue to operate unregulated. All by simply claiming that the fishery must be hurting because they have been struggling to catch them off the Florida coast.

It strikes me as greatly unfair that the minority player in the fishery, recreational anglers and charter boats, will face Draconian restrictions while the other side is allowed to fish on as they historically have.

Remember what I said about recreational anglers being willing to back off when the data says a fishery is in trouble? Well there is no such data and the recs and charter boats have been having no problem catching them.

So the next time someone brings up the so-called "mismanagement" of red snapper, kindly remind them that while we were all focused on red snapper, the recreational fishermen lost a huge piece of our historic vermillion snapper fishery. Asleep at the wheel. Sabotaged by the commercial fleet and a few Florida fish house owners.