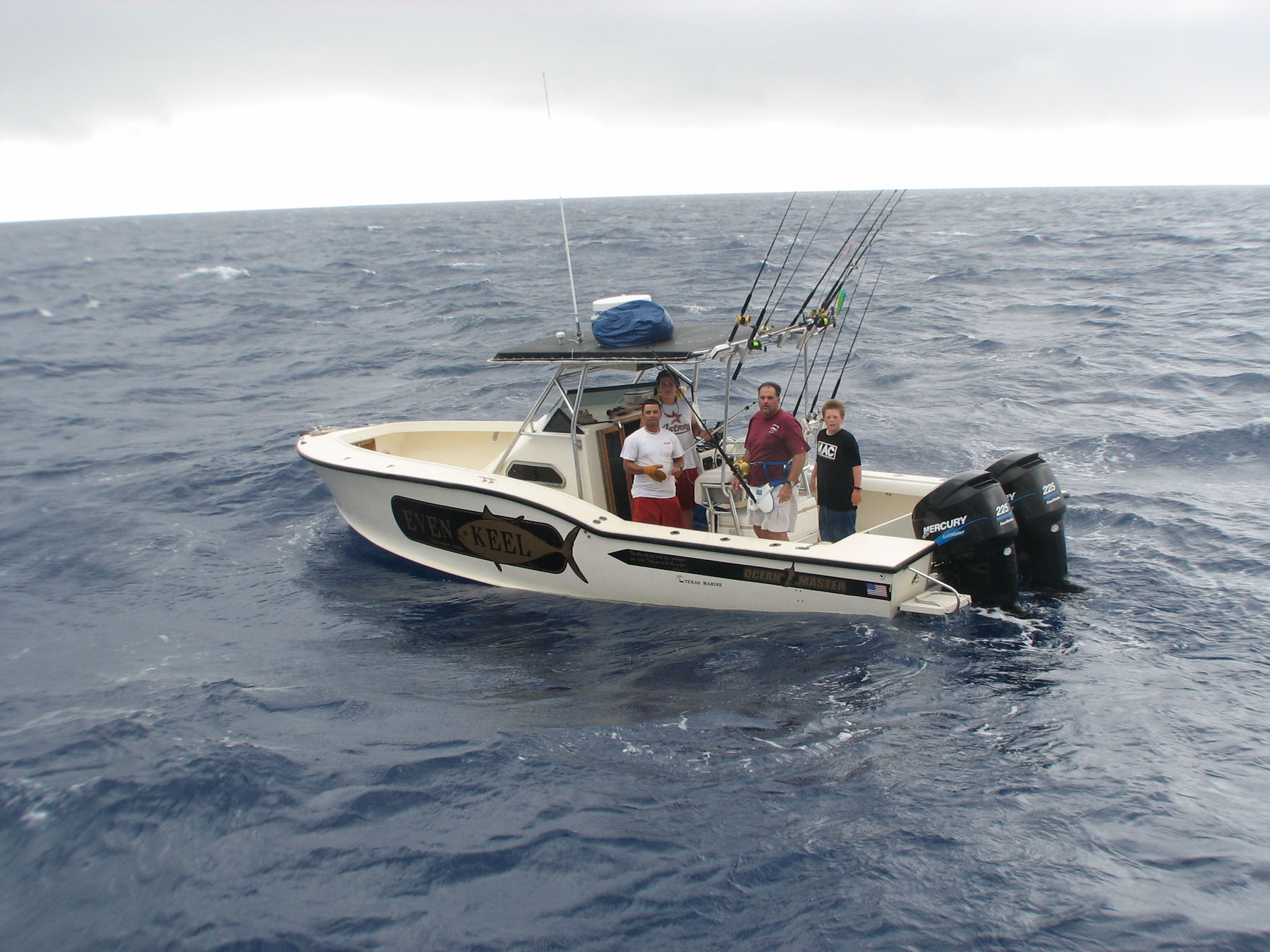 Even Keel and her crew with our mate aboard.

It had been a very busy morning of dodging lightning and rain and we finally managed to find a rig that wasn't covered up by thunderstorms. The conditions looked good dark blue water, plenty of current and lots of bait.

There were several outboards around the rig also, some trolling, some fishing live bait for tuna. We set out a couple of baits and started fishing the up-current side of the rig. Three frigate birds were following a school of dorado, trying to pick off some of the flying fish they were kicking up. A big black cloud was looming nearby but it looked like it would miss us. Some of the wind off the storm started kicking up the seas a bit, but it was still OK.

One of the outboards was passing near the rig when all of a sudden a blue marlin came up jumping behind their boat. We could see it was a small blue and was hoping the bite was on, so we might get a shot. A call comes over the radio. "Hey this is our first blue, can you give us some advice?"

We didn't really know the situation on board so it was hard to help much. "How big is the fish?" The answer came back, "We don't know, we've never caught a blue before." That made sense.

"Keep the line tight," we advised. The angler looked like he was near the bow, a good place to be when fighting a big fish on an outboard.

"How big does it have to be to keep?" they asked. "Well, around 100-inches short length," the other boat fishing nearby added. "Take a picture and let it go, there's no reason to bring it in."

"We can't find the camera, and what's a short length?"

"The short length is from the lower jaw to the fork in the tail. The federal minimum is 99, but you better give yourself some room for error and make sure it's at least 100 inches" we replied.

"Maybe we'll just measure it back at the dock."

"Can you come take a picture for us?"

Our baits were looking real good. We had a nice blackfin tuna on the short bait and a blue runner long. The seas were also real choppy, not good conditions for getting close to other boats offshore and doing much. We discussed the situation for a minute and then decided to go over and try to put the mate on their boat to help them. Also, it would be nice if we could get a satellite tag in the fish. We would take pictures of the action from our boat.

We called the small outboard back. "The boss says its OK, we're coming over."

When we arrived at the boat we realized the situation. Dad was on the bow, strapped into a harness and fighting the fish. His two young sons were watching the action and trying to do what they could. "We're going to put the mate on board to help you." "That would be great" the father replied.

We got the mate transferred to their boat without killing him or the boat, so that part was good. We handed over the tag stick and backed away to give them some room. The fish was tiring and the seas didn't help as the angler was trying to walk around the boat fighting the fish. In a few minutes, the blue was beside the boat and we could see it was about 150 lbs. Not big enough to meet the federal minimum, but still a blue marlin and a great catch.

The mate grabbed the leader and was reaching for the tag stick when the leader parted. We watched the fish swim away to fight another day and give some other angler the thrill of a lifetime. "You made a great decision, it was a small blue."

We retrieved the mate back on board, once again without killing anybody and told the father we would find them back at the marina that evening. We continued fishing until late afternoon with no success and then ran on in. All the way in we talked about the father with his sons and how it was a great experience for his boys. Hopefully, that experience will stay with them and encourage them to continue fishing.

Back at the dock we finished cleaning up and headed over to find the triumphant crew. We found the boat, but it was late and they had left for the night. The pictures we had taken offshore were put under the console and as we expected, no marlin flag was flying. No problem, the mate had brought one of ours. We would love to have seen their reaction the next morning when they saw the blue marlin flag flying proudly from their boat.

Catching a blue marlin on your own boat with your family and friends onboard is an experience that you will remember for a lifetime. We can't think of a better way to enjoy the outdoors with your family (hunting is real close, however!) If you need help getting started or if you want to talk about fishing or rigging your boat, give us a call at Byrd & Cochrane. It's time to go fishing!

Remember, Byrd & Cochrane is an authorized broker for Fox Yacht Sales, the Texas dealer for Cabo and Riviera Yachts. Fox has an extensive inventory of brokerage boats as well and will be glad to help you find a boat or sell yours. We specialize in sportfishing boats and motor yachts. Come by and get a great deal on your next boat. For more information call our office at 281-291-0656 or check out our website at www.byrd-cochrane.com or www.foxyachtsales.com.