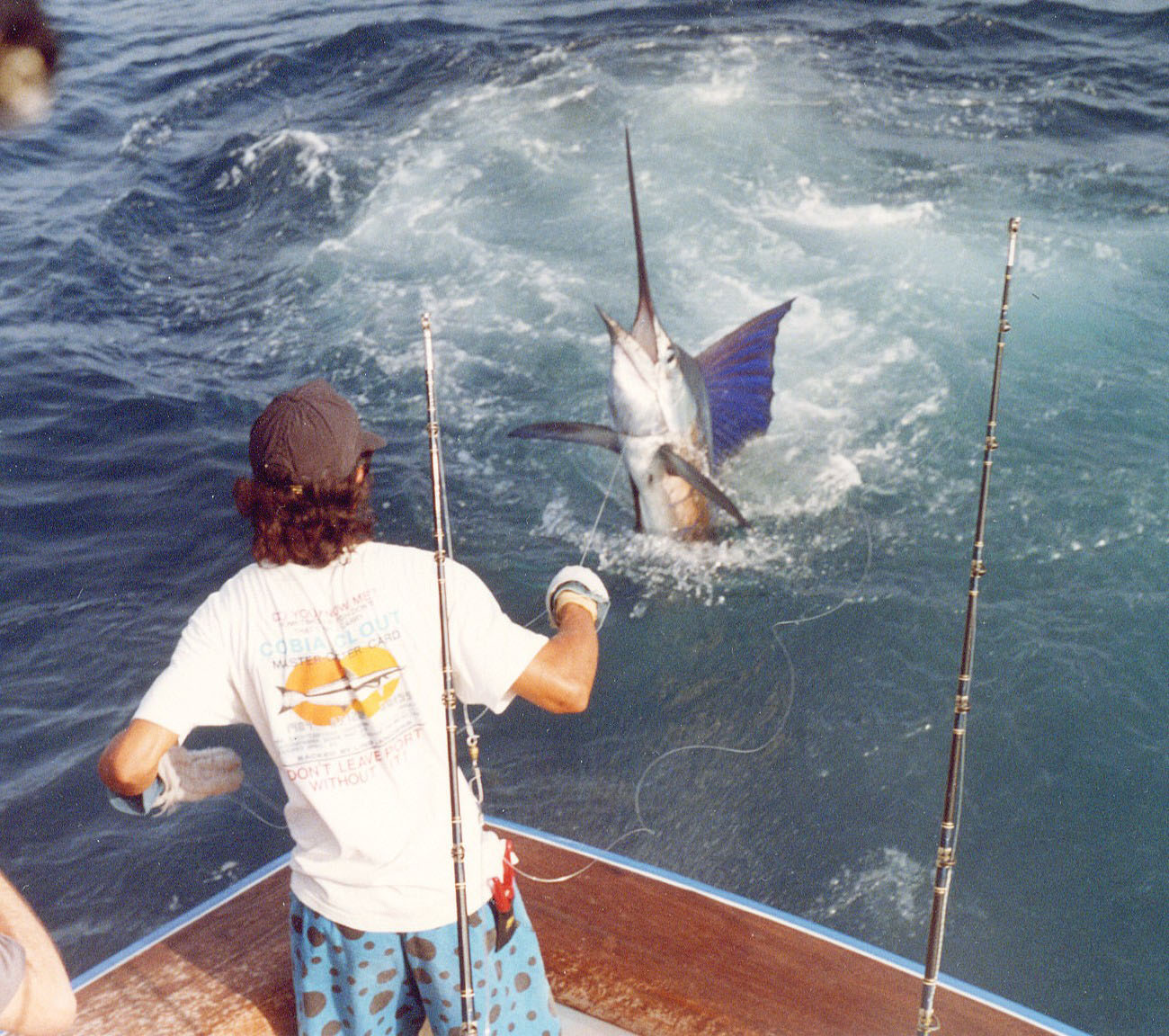 The allure of big game fishing draws many anglers to the deep waters off the Texas coast. Some of these fishermen have learned from others how to catch and handle big fish, but many have not. In this article we would like to focus on handling big fish at the boat, particularly large billfish. It's important to understand how to handle these fish for several reasons. The first and most important reason is safety. Whether you are in a tournament or just fun fishing, you don't want anyone getting hurt. Big fish can put a lot of pressure on you and your equipment, so being careful is important and sometimes difficult, especially when the seas kick up. Secondly, if you are not going to boat the fish, you want to release it in good condition; so it can live to fight another day. Lastly, if you are boating the fish in a tournament; you want to do it right, so you get the qualifying fish in the boat and win.

When going after big fish, one of the first things to think about is leader. With a traditional big game leader setup, you have a snap swivel on the end of your line, then the leader. For large blue marlin this leader needs to be at least 15 ft. or more. You don't want a 500 lb. fish to get the leader around him and then be beating on your line with his tail. When "leadering" the fish, the leader man or "wire man" must grab the leader and take wraps around his hands to pull the fish toward him. Taking these wraps keeps the leader from slipping through his hands as he pulls. Leadering smoothly and properly takes a lot of strength and finesse. Many professional mates prefer this method and really enjoy the challenge. However, if done improperly it can cause safety problems and a good chance you may lose the fish. The danger lies in getting tangled in the loose leader on deck or not being able to release your hand from one of the wraps you have taken. Some mates have even been lost jerked overboard by the fish they were helping land.

It's pretty difficult to explain in words how to take these wraps, it's much easier to show someone in person, but it is important you remember to take double wraps. Not one, not three Two. By taking double wraps you can keep the leader from slipping through your hands and still get untangled if the fish surges away from the boat. With three wraps or more (we call them death wraps) you're not letting go of anything and there's a good chance either you are going in the water or the leader will break. Either way you will lose the fish. If you are using 500 lb. leader or higher and take too many wraps, you are probably going to go swimming. Take double wraps or you might want to consider using a wind-on leader. Larger fish require a considerable amount of leader and using a wind-on leader can make the task of handling a leader of this length easier and a whole lot safer. They do take up line capacity on your reel, but the trade-off is worth it.

We're not going to try and explain how to rig your big game leaders but most major bluewater tackle stores sell them and can show you how to put them on your line. The advantage is that instead of the leader man having to handle the entire leader by himself, he can assist the angler by just pulling on the leader while the angler takes up slack. At the end of the wind-on is a short detachable leader around 6-8 ft. long that goes to the bait or lure. When the wind on is completely on the reel the fish is very close and there is much less leader left to deal with for releasing, tagging or gaffing the fish.

We're going to assume that you have hooked your fish and fought it, have the leader to the boat and are now ready to do something with it. Try to position the boat where the fish is angled off of the corner of the transom, it doesn't matter which side. Avoid allowing the fish to get directly behind the boat because you don't want to cut the line on a prop and the prop wash makes it difficult to control the fish. Get the fish coming up on one side or the other and do your best to keep it there. When the leader man can grab the leader, he should try to do it as smoothly as possible and avoid pulling hard too abruptly. Jerking on the leader may cause the fish to react violently with another long run or come up jumping. Continue bringing the fish up alongside the boat until it can be gaffed, the leader cut or the hook removed.

When gaffing, the gaff man should come in between the wire man and the transom where he will have the best chance for correct placement. Try to gaff the fish behind the dorsal, in the back, where there's plenty of muscle. Always have a second gaff ready. Realistically, blue marlin are the only billfish that should be gaffed and then only during a tournament, if they are large enough. It's much more satisfying to take pictures and let them go to fight another day. If you are tagging the fish, try to place the tag about halfway down the fish in its back. Avoid hitting the lateral line. When releasing, either cut the leader as short as possible or remove the hook. Removing the hook(s) from live billfish thrashing around alongside a boat is not for the faint of heart and can also be fairly dangerous, so if the fish is not cooperating, just cut the leader. Try to avoid handling the fish too long at the boat if you are going to release it. It's a pretty traumatic experience for the fish and it can die from shock alone. We have found that instead of trying to pull the fish along side the boat to help revive it or anything like that, it is better to just let it go as quickly as you can. We have put satellite tags in fish that looked like they had very little life left and they have recovered just fine.

There are several types of specialized gloves on the market for leadering fish. Our favorite gloves are made by Bluewater and come in different sizes. You can also double up a pair of cotton gloves or use leather gloves. Try different kinds and combinations at your local tackle shop and see what works best for you. By the way, the term "wire man" comes from the early days of big game fishing when the only leader material used was wire. Hence, the leader man was the "wire man." Wire is still in use today, but its popularity has dwindled since the creation of Monofilament leader. However, wire is still the leader of choice for "toothy" fish. Mono is much softer, so it's easier to handle and feels more natural to the fish. It also allows your bait to run better and it won't kink.

Catching big fish is the goal of most bluewater fishermen, but handling these fish at the boat safely and successfully takes knowledge and skill. We hope the techniques we have discussed will help you the next time you get a big one up to the boat. If you have any questions on big game fishing and especially handling big fish at the boat, give us a at Byrd & Cochrane or come by and see us at Tops-N-Towers and we will be glad to help you. Our Fox Yacht Sales office can also help you find a boat or sell yours. We specialize in sportfishing boats and motor yachts. Come by and get a great deal on your next boat. For more information call our office at 281-291-0656 or check out our website at www.byrd-cochrane.com or www.foxyachtsales.com.